microstu has worked with the following photographers:

microstu has written about the following acts:

To link to this page, use the URL http://www.hotmusiclive.co.uk/MAGAZINE/magazine/contributor.php?writer=microstu 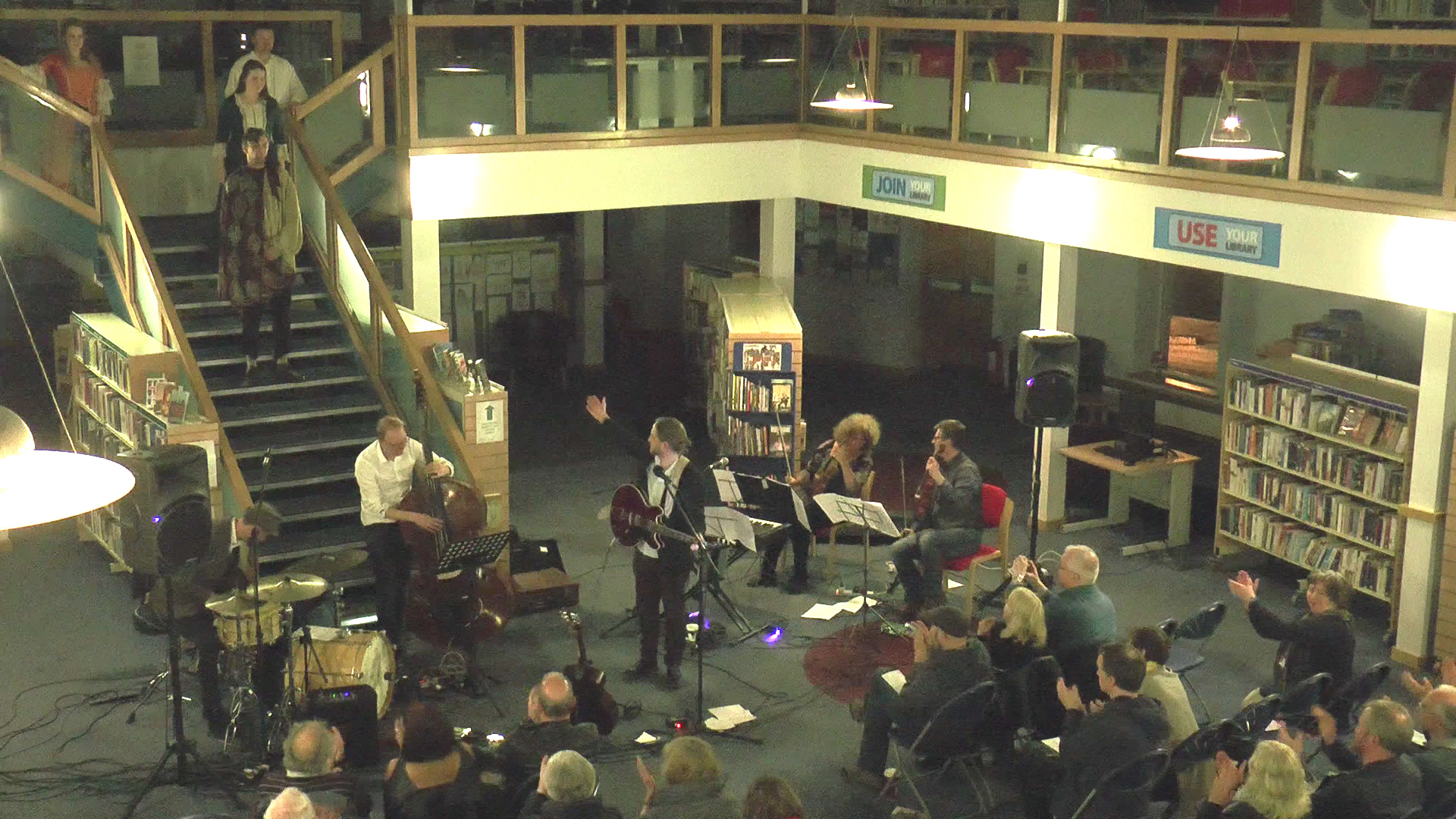 Leamington Spa Library is not your typical live music venue. But, for Wes Finch and his new creative project that is The Rude Mechanicals Band it is the ideal setting.I last saw this band performing as a four piece to a delighted audience packed into the Treehouse bookshop in Kenilworth but now, with the addition of the livewire John Parker on double bass plus four talented young actors to add a new visual dimension, the greater space of the main library is just the perfect setting to see this extended troupe.Based originally on a collection of songs written by Wes using lyrics by William Shakespeare, the set is now growing to include "Cargoes" using words I remember from my school days by John Masefield, along with instrumental compositions and traditional arrangements by the band's string section, Katrin Gilbert (viola) and Jools Street (violin).Now, with their first CD "(Exit, Pursued by a Bear)" available and another already in the offing, this band looks ideally poised to take their live show to a wider audience, exploring interesting new settings and venues such as this.The library gig was very well attended, with an enthusiastic mixture of literature lovers combined with devoted fans of Wes' songwriting, seated and treated to a glorious sound mix courtesy of Drew Coleman. Top quality sound is essential in a setting such as this which was obviously not designed for live music performance and Drew is the local genius responsible for recording, mixing and mastering much of the Wes Finch catalogue of music including the recent CD by this band.To start the evening, Wes opened with a beautiful selection of his own songs, starting with a couple of newer ones, "Merry Dance" and "Pinch of Salt", accompanied by Leo Steeds on piano, followed by a couple of solo numbers; just Wes and his gently atmospheric electric guitar sound on "You Are Light" and "Just My Luck" (a particular new favourite of mine).To complete the first set Wes was joined by Ben Haines on drums, John Parker on double bass and Jools Street on violin to perform "Southern Cross" and "Bowl of Stars" from the wonderful "Mayflower" album (also engineered by Drew) and finishing with "Jackie Stone" (another favourite from the "Awena" CD). "Is there an Awena in the audience?" quipped Wes with a twinkle… of course there was!Following an interval, it was time for the main course; actors dressed beautifully for their part, extra space around the audience area cleared ready and the lights dimmed. No chat between songs from Wes this time, instead the actors presented short scenes and prose, often over gentle instrumentals, to link the songs.With the addition of Katrin Gilbert on viola from the start of the second set, the string sound became much richer and more evocative; the Wes Finch voice crystal clear and savouring the classic lyrics he has put to his own distinctive (but mostly quite traditional sounding) music.The band performed the entirety of the "(Exit, Pursued by a Bear)" CD with the addition of "Under The Greenwood Tree" which featured Katrin on piano and vocals.The actors helped add an extra dimension to the whole performance, drifting in and out of the set adding colour and pageantry, even flirting with the audience for a final dance. This was a fun presentation of a new and adventurous project for Wes and the superb musicians he has gathered around him, totally suited to the library venue and a treat for those who witnessed it.To find out more, visit www.rudemechanicalsband.co.uk and go catch them performing live.