BillG has worked with the following photographers:

BillG has written about the following acts:

To link to this page, use the URL http://www.hotmusiclive.co.uk/MAGAZINE/magazine/contributor.php?writer=BillG

Tea and Cakes and Rock'nRoll - Steamchicken at Harbury Village Hall 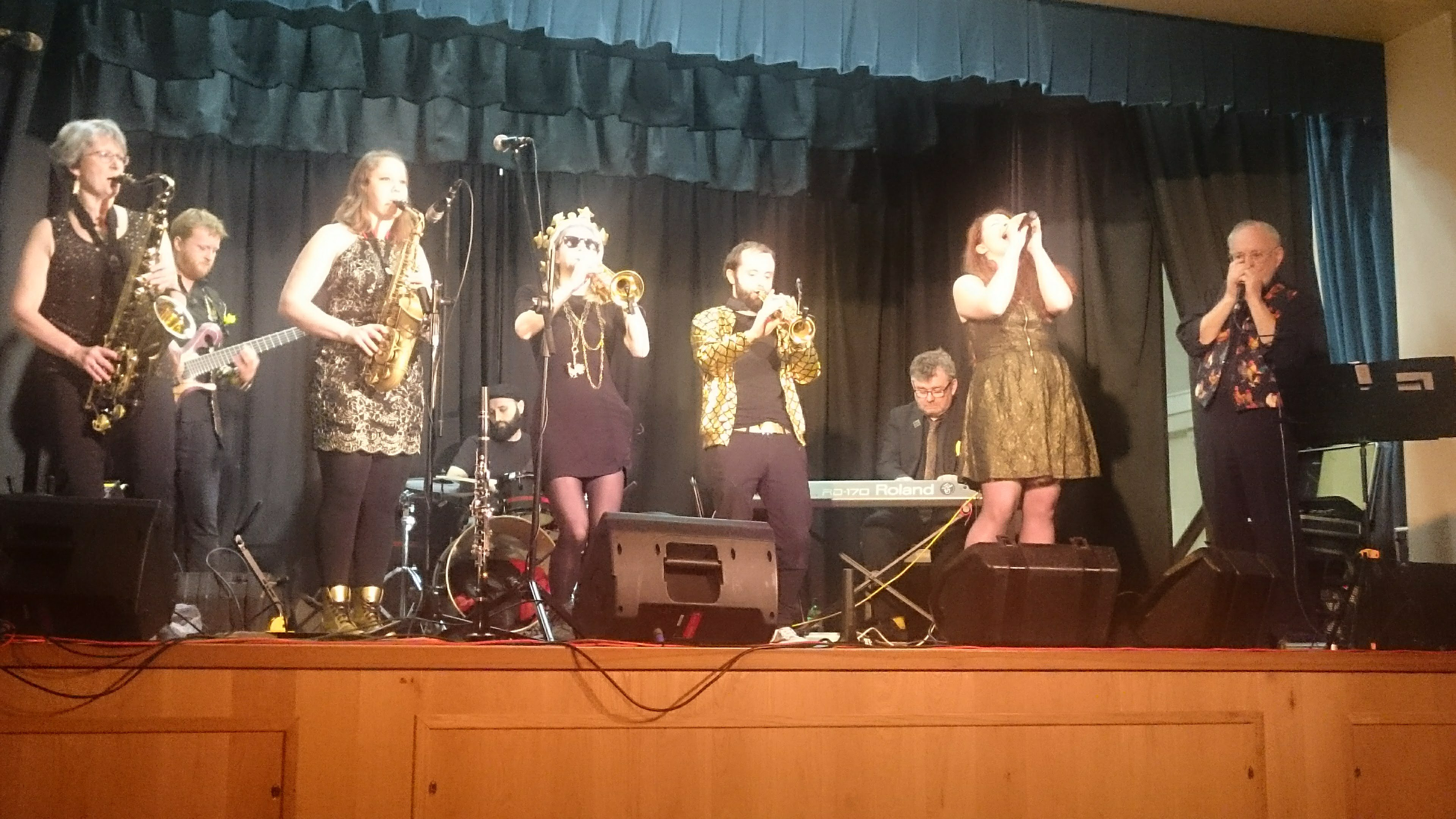 Currently touring their latest album, Look Both Ways, Warwickshire's own Steamchicken took a day off from the trail of pubs, bars and restaurants that have been hosting them so far to come to what is home for about half the band, the village of Harbury, and a sell-out audience in the spacious village hall.

For reasons best known to them (maybe they didn't want to miss a good night on the tele?) the gig ran from 4 till 6 with tea and very generous helpings of cake served at the interval. Think that was unusual? No bar. Great cake though......

Anyway, we weren't there to comment on the catering facilities. Fetchingly adorned in quirky combinations of gold and black, the band kicked off on the dot with the rousing Cecilia and Landslide – statements of intent for the next 90 minutes. Amy Kakoura is their striking and engaging singer, and she lines up alongside a powerful horn section, featuring tenor, alto (occasionally clarinet) and soprano saxes with trumpet and harmonica, in front of an assertive and driving rhythm section that could give Niles Rogers Chic a run for their money, Joe Crum laying down huge beats on drums and Tim Yates busy working the floor-shaking bottom-end of an exotic-looking 5-string bass.

Steamchicken have an eclectic repertoire – coming from a folk/ceilidh background, they have cleverly branched out to embrace jazz, reggae/ska, swing, country and blues, all of which filter through in varying amounts to a set inclusive of anything from ‘50s rock to old-as-the-hills folk classics, with many of Andrew Sharpe (keys) and Amy's own original songs in the mix.

They are great to watch – its never easy swinging a horn about on stage but these guys manage it in spectacular style with choreographed moves that don't risk taking any eyes out, while never missing a beat. And what beats – Steamchicken don't do straightforward when it comes to repertoire and arrangements. Ella Fitzgerald's hectic bebop When I Get Low I Get High gets a workover that brings in influences from electro-swing to Balkan street band, Oh Mary Don't You Weep gets a reggae beat complete with a gorgeous ethereal horn riff straight out of Kingston (Jamaica, not on-Thames...). Johnny Cash doesn't escape lightly with Ted Crum on harmonica using electronic wizardry to sound like the train whistle from hell on a funked-up Folsom Prison Blues.

In between the power numbers, a few of the band escape for a quick lie-down and re-dusting of the gold glitter, while Becky Eden-Green contributes some beautifully moody and evocative clarinet on a couple of quieter numbers where Matt Crum also ditches his soprano to take over on the keys. The stand-out example of this reduced line-up is the elegant, sweeping Madam Will You Walk, one of Amy's own songs.

Sadly, the audience wasn't driven to getting their boogie on and remained firmly seated throughout -  the late afternoon timing maybe, or the lack of beer? Who knows, its a shame because this is original and infectious music that cries out to be danced to – but there was certainly no lack of appreciation of their performance. Their spiky, riff-driven version of the classic Walls of Jericho brought the event to a notional close, before the obligatory encore of Ain't Nobody Here But Us Chickens, pretty much the band's anthem, unsurprisingly!

These guys really should be better-known and fronting up main stages on a few summer festivals. In the meantime, the tour continues until mid-April with appearances in Tunbridge Wells,  Maidstone, London, Newbury, Evesham and Dursley. Details on their website - http://www.steamchicken.co.uk/livedates.php

The CD is well worth investing ten quid in as well, an excellent recording done at Leamington's own Woodbine Street Studios which manages to capture the exuberance and variety of the band's live performance. 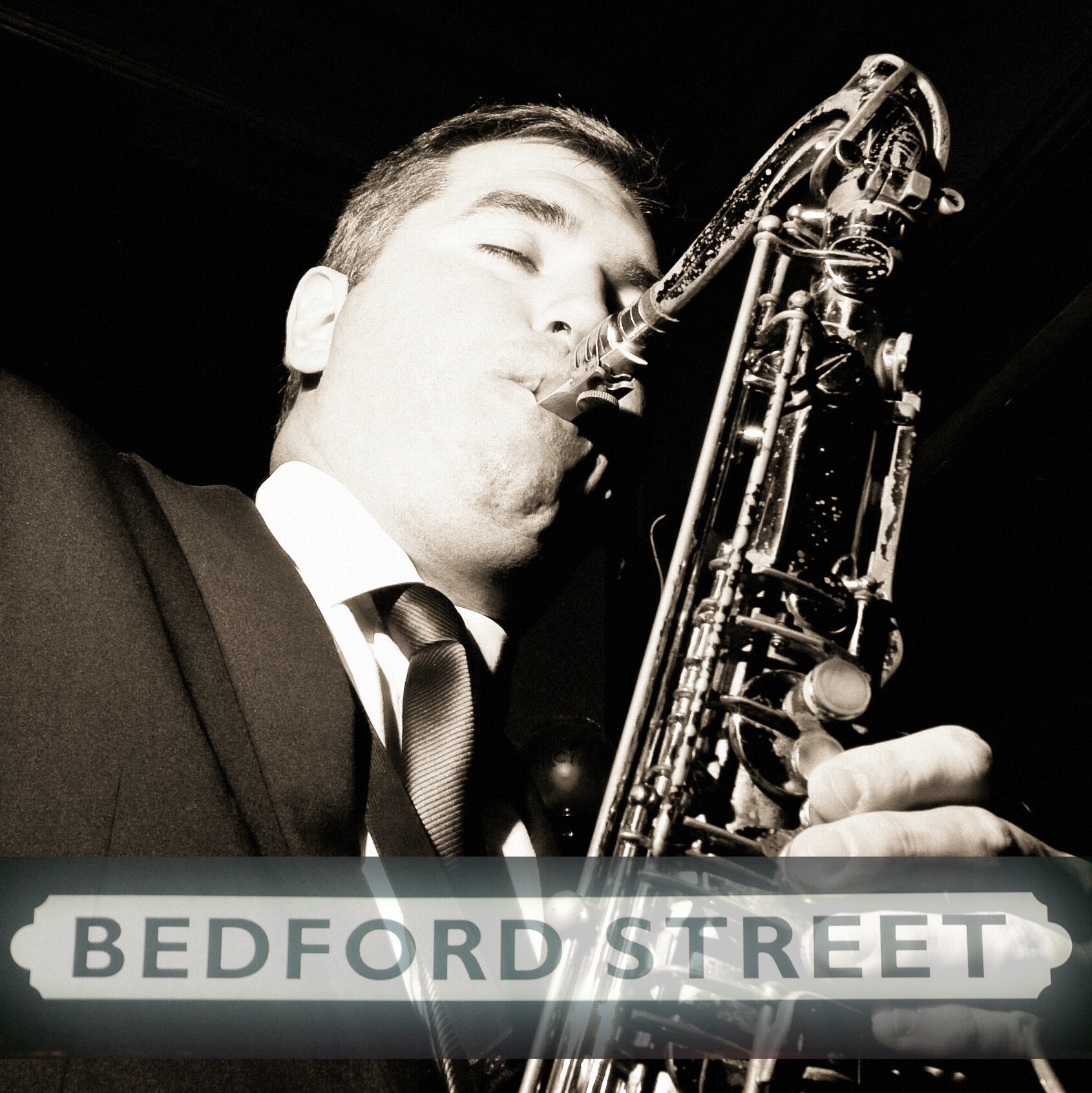 1 of 3
Contributed by Bill GibbonThe audience at Leamington's Bedford Street Bar's usual lively Wednesday night jazz jam session had a slightly different demographic on Jan 18th – alongside the regular crowd, a cluster of grizzled middle-aged men clutched their pints of bitter and tried (mostly unsuccessfully) to look inconspicuous among the cool and hip millennials that flock to this ever entertaining evening, run by ace bass man Wayne Matthews.These are SJFs (Serious Jazz Fans), drawn like proverbial moths to a flame by a proper jazz heavyweight, tenor-sax player Simon Spillett. Simon has won accolades for his playing from the BBC, Jazz Journal magazine, pretty much everyone who's a big name in jazz from Sir Johnny Dankworth to Humphrey Lyttleton, and is a regular sell-out at Ronnie Scott's.The regular houseband for the Jazz Jam Wednesdays warmed up the evening with some great quartet playing; Perdido (Clark Terry arrangement), What is this Thing Called Love and Strasbourg St Denis (Roy Hargrove), which even before Simon's appearance kept the audience's enthusiasm and interest levels high; featuring Matt Ball on Keys, Tom Voce on Drums, Myles Matthews on Guitar and Wayne Matthews himself on a fretless acoustic bass.Dressed in a sober grey suit, the only clue that Simon Spillett wasn't a solicitor dropping in for a pint after a late night at the office was the red laces in immaculate black shoes – and the well-travelled sax slung round his neck. Simon's style is bebop – for those unfamiliar with jazz terminology, bebop is played fast and furious, with solo improvisations ripping up and down the scales and working every nook and cranny of the instrument. In the hands of lesser players, it can very easily sound like a frantic and bewildering blur of notes – difficult to engage with but impossible to ignore. Simon is in a league of his own though – a true master musician who can certainly play at an unimaginable and jaw-dropping speed (and as a tenor-player myself, my jaw really did drop!) but who does it with such imagination and fluency that it's impossible not to be engaged. The man's mind must run at hyper-speed to create and control such a flowing rush of notes that can still be so intense, inventive and coherent.He ripped straight into the Sonny Rollins hard bop standard Oleo, eased off the gas for the lyrical But Beautiful, and closed his first set with the classic Cherokee played at a stunning tempo. After a short break he came back with another Rollins number, Sunnymoon for Two then generously stuck around to join in the open jam session, adding some nice fills to a couple of great vocal contributions from the Bedford Street regulars.Serious Jazz Fans and general audience alike were all absorbed and in awe at this majestic torrent of music and their appreciation was shown generously. Wayne's quartet backed him up splendidly, obviously thoroughly enjoying the moment, with Tom Voce trading some scintillating licks in a couple of the numbers. A great night then – the Bedford Street bar was packed, and Wayne has plans to feed the appetite for top quality jazz in Leamington with further dates booked already; for Bryan Corbett (who has played trumpet with The Brand New Heavies, Tony Christie, Ben E King, Us3, Alesha Dixon, Ella Eyre, Sam Bailey, Gary US Bonds, Ruby Turner and many others) on April 12th; and a return for Simon Spillett on May 24th – and we are promised more to follow! Check out the Bedford Street Jazz Jam Facebook page for further details - https://www.facebook.com/groups/865127346878581/