LAURENCE JONES - TELLING THE TRUTH AT THE ZEPHYR 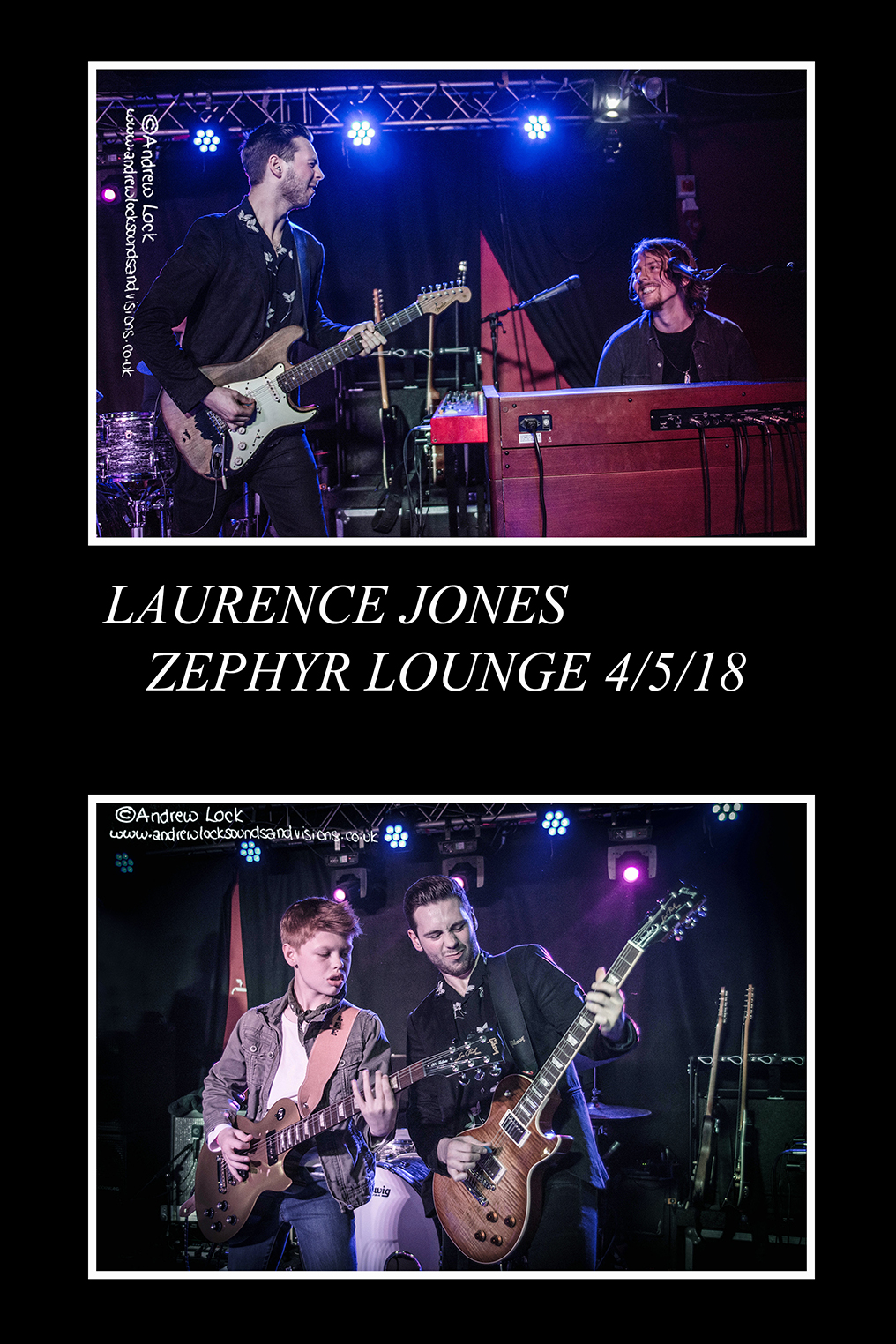 No support just two hours of the finest modern blues around curtesy of our local boy Laurence and his red hot, explosive band and talking of his band for me this current line-up is the best he has ever had.
Greg Smith at the back on bass is cool and steady as a rock if not as much of a character as previous bassist Roger Innis but then few people are!, Phil Wilson cuts a dynamic figure on the drum stool with flourishes galore and surely one of Laurence's best decisions was bringing a keyboard player to the band and Bennet Holland is a revelation on the wonderful Hammond and other keys adding an extra dimension to the sound while also suppling quality backing vocals.
All of his studio output was paid a visit with as expected his recently released The Truth album given special attention, this latest work is certainly his most polished and diverse album to date keeping his wonderful blues style but giving us what he says he has always wanted, to produce a crossover blues album like some of his musical heroes.
Most of The Truth material was given a run out with the opening two numbers the same as on the album firstly the wonderful, groovy and funky blues of ‘What Would You Do' followed by the zippy ‘Don't Let Me Go'.
Other standouts from the newbie included with possibly the biggest change of style from Laurence the catchy, light and breezy ‘Keep Me Up At Night' which even had a touch of dare we say dance music about it at times and the intense slow blues of ‘Can't Go On Without You' which included a cracking guitar/Hammond duel and loved Laurence's comment after a string break "you can't break a string on a keyboard".
For me when Laurence pays tribute to Jimi Hendrix (introduced by saying he is the reason he picked up a guitar, pretty sure he is not alone in that!) it is always a magical part of the set and ‘All Along The WatchTower' was an explosive delight with not for the only time in the set Laurence at full light on the fretboard just inches from those of us on the front row.
Another equally magical part of the set and the best version I have heard was going right back to the start of his story with the soulful, blues drenched ‘Thunder In The Sky' from his debut album and the extended solos were a joy to behold.
These days Laurence's stage craft matches his guitar prowess and always improving vocals as he made sure to get right into the fans faces either side of the stage and during one track taking his guitar off stage into the crowd and while surrounded getting down on his knees and soloing with his teeth!
Great to see Laurence bring the extremely young Toby Lee onto stage for a couple of numbers again and this extremely youthful guitar maestro (makes Laurence seem like an old master!) was having a ball sharing licks with our Laurence, surely it cannot be long before we see him on the Zephyr stage in his own right.
The rockiest part of the night introduced with a "Are You Ready To Rock and Roll" was a storming ‘Foolin Me' from the Temptation album with Laurence on full throttle and for crowd participation we had plenty of opportunity to sing along during the smooth, cool and funky ‘I Will'.
For emotional content ‘Thinking About Tomorrow' a song born out of tragedy is hard to beat starting with Laurence alone the rest of the band gradually walked on and joined in making this a special heartfelt moment of a special gig.
Another faultless performance by no longer a rising star but these days a real star of the modern blues scene with the added bonus that he is one of our very own.
Wonderful.

One of our very best local blues men Laurence Jones is back on home turf this May when he performs at The Zephyr Lounge on Friday 4th in conjunction ...
[3 images] END_OF_DOCUMENT_TOKEN_TO_BE_REPLACED

Another welcome return to town for one of our very own (Shipston-on-Stour, close enough!) and after his fabulous show at the smaller Zephyr Lounge ...
[3 images] END_OF_DOCUMENT_TOKEN_TO_BE_REPLACED

The multi award winning Blues sensation 25-year-old Laurence Jones was interviewed after his brilliant gig at the Zephyr Lounge in Leamington Spa on ...
[3 images] END_OF_DOCUMENT_TOKEN_TO_BE_REPLACED

Yet another spectacular performance by this amazing blues artist and another on home turf (he regularly looks after what he calls his family of local ...
[5 images] END_OF_DOCUMENT_TOKEN_TO_BE_REPLACED

Be it jamming on stage with Steve Walwyn and Joanne Shaw Taylor, supporting King King, headlining his own shows at the Zephyr Lounge and Leamington ...
[2 images] END_OF_DOCUMENT_TOKEN_TO_BE_REPLACED

The Shipston Proms committee is excited to announce that the 19th Shipston Proms, held between 16th June to 1st July 2017, will be headlined on the ...
[8 images] END_OF_DOCUMENT_TOKEN_TO_BE_REPLACED

I have often written about the wonderful, in fact the weird, thought provoking & wonderful evenings Johnny Satsangi puts on at the Zephyr Lounge ...
[1 image] END_OF_DOCUMENT_TOKEN_TO_BE_REPLACED