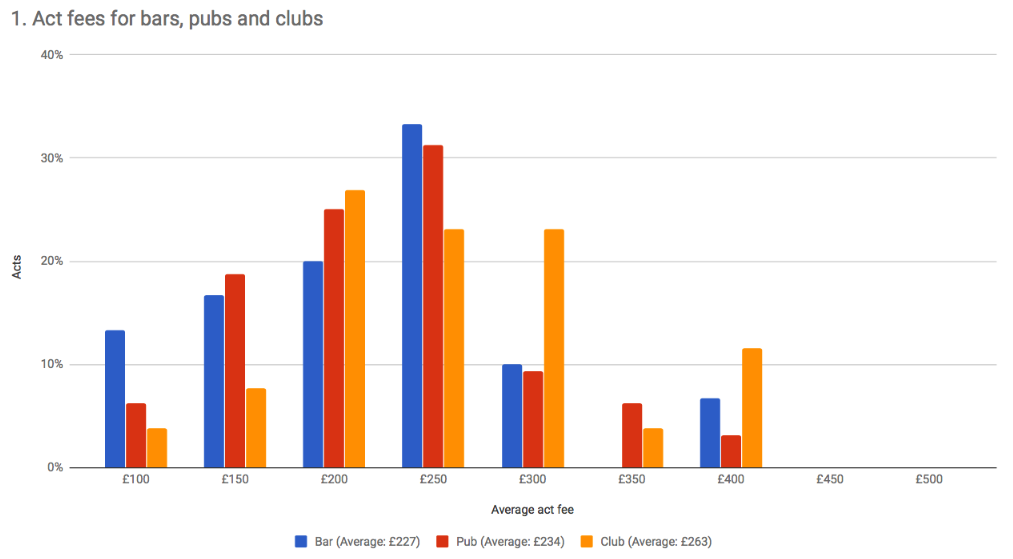 Here are the results of the Hot Music Live musician fees survey for 2017. Massive thanks to the 37 acts who responded. That's around 8% of the 300 or so acts we know to be active and a decent enough sample to give us some confidence in the data.

Here are the headline numbers: the average fees per act for bars and pubs (figure 1) are similar at £227 and £234 while the fee for clubs is somewhat better at £263. Functions are typically much better paid (figure 2) with an average fee of £425. Average fees for individual musicians (figure 3) range from £57 for bar gigs to £101 for functions. People who play in larger acts tend to get paid less than those in more compact lineups.

Covers gigs, especially functions, are somewhat better paid than acts who interpret older material such as jazz, blues and roots (figure 4). While this chart suggests that originals bands can earn good fees, the data is based on only 2 returns out of 4 originals acts and the comments below show that it can be a tough marketplace for songwriting bands.  Fully amplified bands (figure 5) typically earn more than acoustic acts and semi-acoustic acts, especially, again for functions.

Here's what people had to say about their expectations:

... and about the scene in general:

So, the best fees are associated with playing covers at weddings and functions in small amplified lineups. No staggering surprise of course but it's always interesting to see some data to support our instincts about the market place.  Let's do it again in 2018 and recruit some more acts to complete  the survey and get some more insight into our market.