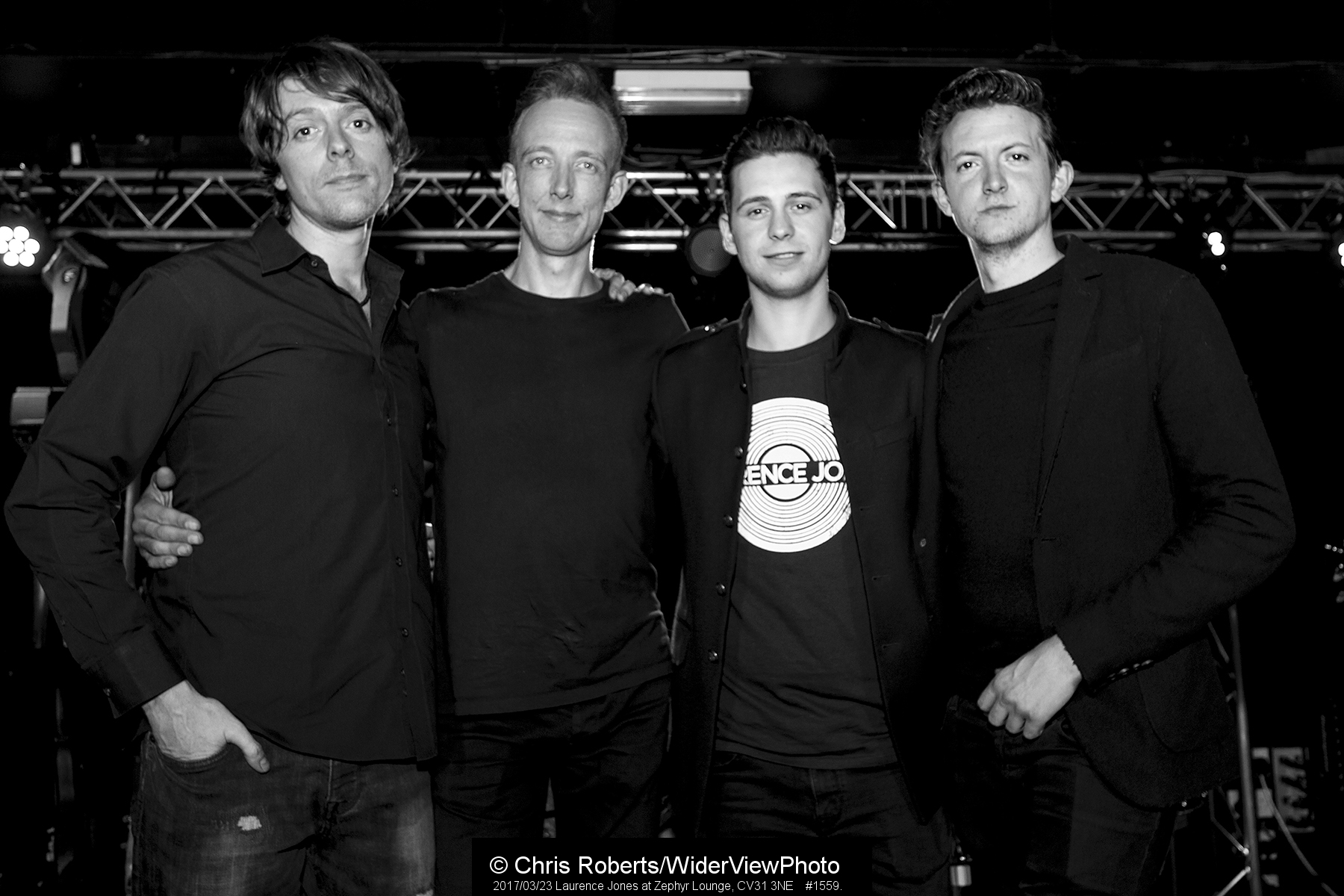 1 of 3
The multi award winning Blues sensation 25-year-old Laurence Jones was interviewed after his brilliant gig at the Zephyr Lounge in Leamington Spa on 19th April 2017. Laurence has won Best Young Blues Guitarist for three years running (2014-16) at the British Blues Awards.The Leamington Spa gig was his local gig on his UK tour, with him living since aged 8 in Shipston-on-Stour in Warwickshire, but born in Liverpool.His band line-up is Laurence Jones (guitar and vocals), Bennett Holland (keyboard and vocals), Greg Smith (bass guitar) and Phil Wilson (drums).Q) Thanks for agreeing to be interviewed and how is it going?It is going very well, but very busy, and it's great to be able to play to my local fans on this tour, in a town (Leamington Spa) that I started gigged in as a 16 year old budding musician. Q) What were your early music influences?I listened to bands such as The Hoax (An English Blues band), classic guitarists/singers in Jimmy Hendrix and Eric Clapton along with Tony Mcphee (English blues guitarist, and founder of The Groundhogs).Q) What was your first Blues record?Walter Trout – "Transition" (1992). The title track from this album is my all-time favourite, but one Walter doesn't play live. So I loved it when Walter played this song to me in the dressing room, shared with Buddy Guy, in the Carnegie Hall (New York) where I was also playing in 2015.Q) Can you talk us through the process of writing a song?This has now become very natural but originally was with the guitar first finding the rifs and key song chords, and then getting the melodies that become the vocals. With more experience on the road I find that new songs are coming easier used my personal experiences in life.Q) How do you cope with Crohn's disease?I have to be very careful what I eat and drink, particularly on tour, and it helps when I am touring in Europe I have caterers with me you understand what I need, which is great. Otherwise I must fend for myself!.(Crohn's disease is caused by a combination of environmental, immune and bacterial factors in genetically susceptible individuals. It results in a chronic inflammatory disorder, in which the body's immune system attacks the gastrointestinal tract possibly directed at microbial antigens.)Q) What are your Musical ambitions?While I experimented with some pop songs in my early days I soon found and loved the Blues. I want now to evolve my band's sound into a more Blues/Rock sound to keep my audience on their toes. I do also have a few songs that I sing as acoustic sets that are a bit more pop based, and tested these out at a recent songwriters night in Leamington Spa.Q) You have expanded to a 4-piece band – how is your music style developing?I wanted to evolve my band into a younger hungrier line-up, and now have added this year a keyboard player (Bennett Holland), to give a fuller sound that appeals to all ages.Q) What do you listen to when relaxing?When I do get any quality time to relax I listen to Blues artist such as US Bluesman Joe Bonamassa, English indie pop band Blossoms and US Blues/Soul artist Gary Lee Clark JuniorQ) What is your greatest achievement to date?Holding my "Take Me High" album launch at the Townsend Hall in my home town of Shipston-on-Stour, Warwickshire in front of a large crowd of excited locals, who have supported me since I first started out in the business aged 16. It was also great to eradicate the disappointment of losing the Shipston Proms Fame Contest, which I participated in the same venue, aged 12.Laurence's current "Take It High" continues with dates around the UK (and a quick trip to the Nidaros Blues Festival in Trondheim, Norway) until the end of April 2017.Then in May and June he will be supporting Vintage Trouble (American Rhythm & Blues) on their UK tour.Later in the year Laurence and his band will be supporting Grammy winning Kenny Wayne Shepherd on his European & UK tour, as well as many more dates in 2017 including headlining at the Shipston Proms on 1st July and other festivals around Europe.More information about Laurence and his tour dates can be found on his website http://www.laurencejonesmusic.com For a full set of copyright images from the Zephyr Lounge, Leamington Spa gig, please review my Flick album https://www.flickr.com/photos/widerviewphoto/albums/72157680217745662
Web

No support just two hours of the finest modern blues around curtesy of our local boy Laurence and his red hot, explosive band and talking of his band ...
[3 images] END_OF_DOCUMENT_TOKEN_TO_BE_REPLACED

One of our very best local blues men Laurence Jones is back on home turf this May when he performs at The Zephyr Lounge on Friday 4th in conjunction ...
[3 images] END_OF_DOCUMENT_TOKEN_TO_BE_REPLACED

Another welcome return to town for one of our very own (Shipston-on-Stour, close enough!) and after his fabulous show at the smaller Zephyr Lounge ...
[3 images] END_OF_DOCUMENT_TOKEN_TO_BE_REPLACED

Yet another spectacular performance by this amazing blues artist and another on home turf (he regularly looks after what he calls his family of local ...
[5 images] END_OF_DOCUMENT_TOKEN_TO_BE_REPLACED

Be it jamming on stage with Steve Walwyn and Joanne Shaw Taylor, supporting King King, headlining his own shows at the Zephyr Lounge and Leamington ...
[2 images] END_OF_DOCUMENT_TOKEN_TO_BE_REPLACED

The Shipston Proms committee is excited to announce that the 19th Shipston Proms, held between 16th June to 1st July 2017, will be headlined on the ...
[8 images] END_OF_DOCUMENT_TOKEN_TO_BE_REPLACED

I have often written about the wonderful, in fact the weird, thought provoking & wonderful evenings Johnny Satsangi puts on at the Zephyr Lounge ...
[1 image] END_OF_DOCUMENT_TOKEN_TO_BE_REPLACED