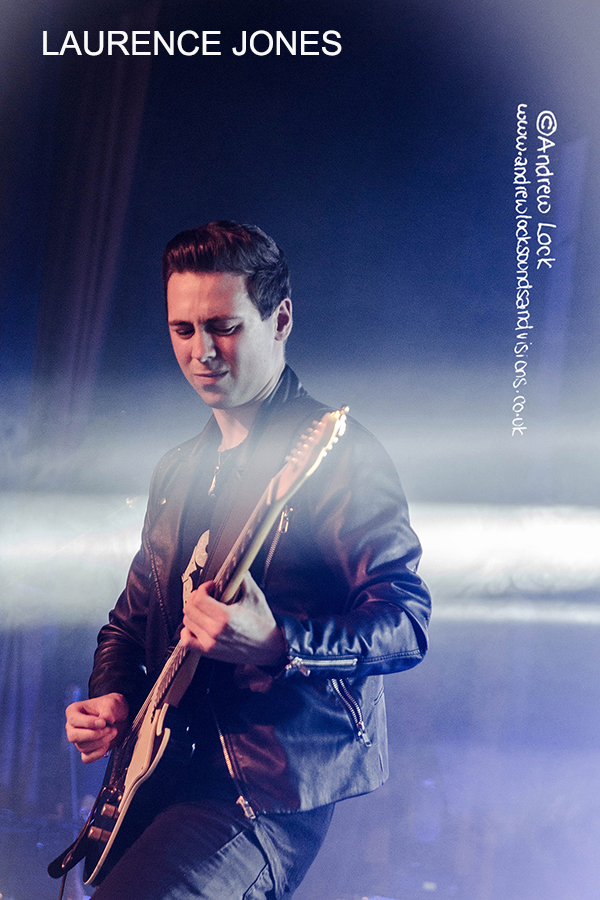 1 of 4
Laurence was on fire for this homecoming show in his beloved Shipston On Stour which was also the official launch gig for his 4th album Take Me High, he first performed at the venue at the age of 12 at a talent show.Support was quirky 5 piece rock band Jupitronz, hard to pin down a style as for me the sound included elements of prog rock, indie rock and a touch of Hawkwind style space rock at times, and I also thought I heard touches of Clash and even the vocal harmony work of Deacon Blue.Vocal harmonies really stood out and this was an interesting set with the highlight possibly ‘Curse of the Green Monkey' with it's touch of funk.I have had the pleasure of seeing such progression in Laurence's playing, stage craft and overall confidence, from seeing him jamming with Steve Walwyn (Dr Feelgood) at the Zephyr Lounge on a couple of numbers to this knockout performance at a packed to the rafters home town gig.I love that he mixes the blues styles so well, blues rock, swawp blues, funky blues, you name it he delivers it all with panache and he is turning into a songwriter of real depth and quality.His band could not be tighter with long time bass extraordinaire Roger Inness the perfect foil and also a bit of a star in his own right while the newest member of this 3 piece band drummer Phil Wilson fits in perfectly in both his playing and his style/look.Laurence pulls off all of the much loved show boating guitar skills with great aplomb, use of feedback, one handed playing and almost taking his guitar into the front row itself.The atmosphere was electric as Laurence and band walked on to the stage and this sense of excitement remained throughout. The set burst into life with newbie ‘Got No Place To Go' and plenty on offer from his new baby this evening including ‘Something's Changed' where Laurence threw in a little reggea/ska and the groove laden ‘I Will' (debut single from the album).New gems also included the lively ‘Live it Up' dedicated to a sadly departed friend and ‘Down & Blue' written about Laurence's Creons disease.Not just the fab new stuff on offer though with visits to his other 3 albums including turning up the heat on rocker ‘Can't Keep Living Like This', full blooded epic ‘Thunder In the Sky' and what Laurence called one of his hits (as he puts it "except I don't have hits as I play real music") the catchy summer-feel, blues of ‘Fall From the Sky'.Really pleased to see the re-introduction of his Hendrix segment (have really missed this part of his set) for an explosive 'All Along the Watchtower' complete with an extended jam and even a touch of Stairway To Heaven.Laurence was also on top form between numbers and loved the way he said with great pride about halfway through the set that they had already had a complaint about the noise from a neighbour and he also told a few tales of his times in Shipston.The crowd were up for this gig as much as Laurence himself, dancing, clapping, singing along and hands in the air all totally caught up in the magic of this special night and as for myself this could easily make it to my top 10 ten shows of all time.

No support just two hours of the finest modern blues around curtesy of our local boy Laurence and his red hot, explosive band and talking of his band ...
[3 images] END_OF_DOCUMENT_TOKEN_TO_BE_REPLACED

One of our very best local blues men Laurence Jones is back on home turf this May when he performs at The Zephyr Lounge on Friday 4th in conjunction ...
[3 images] END_OF_DOCUMENT_TOKEN_TO_BE_REPLACED

Another welcome return to town for one of our very own (Shipston-on-Stour, close enough!) and after his fabulous show at the smaller Zephyr Lounge ...
[3 images] END_OF_DOCUMENT_TOKEN_TO_BE_REPLACED

The multi award winning Blues sensation 25-year-old Laurence Jones was interviewed after his brilliant gig at the Zephyr Lounge in Leamington Spa on ...
[3 images] END_OF_DOCUMENT_TOKEN_TO_BE_REPLACED

Yet another spectacular performance by this amazing blues artist and another on home turf (he regularly looks after what he calls his family of local ...
[5 images] END_OF_DOCUMENT_TOKEN_TO_BE_REPLACED

Be it jamming on stage with Steve Walwyn and Joanne Shaw Taylor, supporting King King, headlining his own shows at the Zephyr Lounge and Leamington ...
[2 images] END_OF_DOCUMENT_TOKEN_TO_BE_REPLACED