The Mechanicals Band at the Magic Lantern


The Mechanicals Band at the Magic Lantern 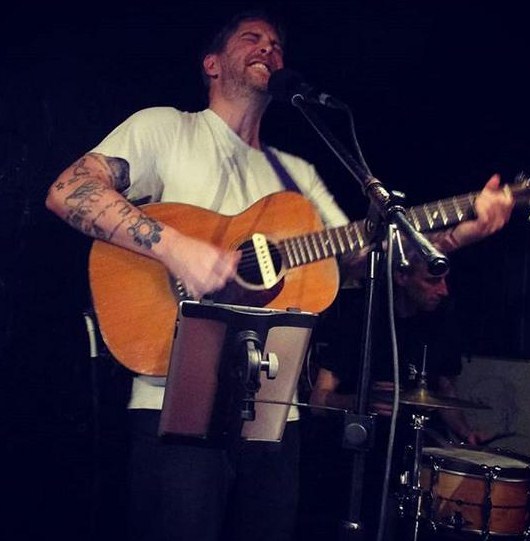 There are few finer feelings than being immersed in the finest music in an intimate setting so it not merely impacts on your hearing but defines your whole emotional environment. I experienced it on Friday with Hannah Woof & Izzie Derry & returned to the Magic Lantern yesterday for a similar experience with the Mechanicals Band (formerly the Rude Mechanicals). They may be less rude these days but that didn't stop the F Bomb being dropped in the latter part of the set's lyrics. But it was written by a poet so that's alright)

First up for a highly enthusiastic packed house in this wonderful new independent venue was a real treat: Lisa Franklin (who compèred the evening & often provides dramatic accompaniment to Mechanicals Band performances when space permits) had invited Caroline Horton (Olivier Award nominated performer, writer & theatre maker: check her out at https://carolinehorton.net/about/) to open the evening. Performing a most interesting & original mix of poetry, quasi-poetry, sung pieces & pieces which defy categorisation, Caroline really made the audience think & got the evening off to a flying start. Well worth catching her live solo act in my opinion.

What can one say about the main band? Five virtuoso musicians with international reputations performing the highest quality poetry set to music by Wes Finch (plus an instrumental written by Jools Street), it was a privilege to be present & like the best music, it was transcendental. Did it take me somewhere else? Did it greatly improve my state of mind? Yes it did: in bucket loads. Wes, (guitar & vocals), Jools (violin), John Parker (double bass, Ben Haines (drums & percussion) and Katrin Gilbert (viola and on occasions keyboards: not sure they could have fitted one in tonight) need no introduction & the interplay between them was of the highest order. I'd just also say that in addition to the five instruments & voice, there was a seventh vital ingredient: space. They use this beautifully & it really does enhance the pieces & add significantly to the dynamics. No piece featured every instrument throughout & several only featured two or three such as Jools' "Tongue Lose Thy Light" (a violin & viola duet) and the sublime "Sigh No More Ladies" (a Wes & John duet). Equally noticeable was the sense of joie de vivre in the band: they were enjoying playing together just as much as we were hearing them.

The early part of the set was drawn from current album "Exit Pursued by a Bear", and apart from the instrumental, was settings of Shakespearean lyrics plus John Masefield's "Cargoes". The latter part focused on their upcoming second album and began with three Phillip Larkin settings ("Long Lion Days": unpublished in his lifetime, "Horns of the Morning"  and "This Be the Verse": one of his best known poems & the one which starts with its reflection on what one's Mum & Dad allegedly do to you). Good that after celebrating Stratford lyricist William Shakespeare, Wes has moved onto another local (Coventry) one.

The final songs include a W B Yeats setting & "Recuerdo' by Edna St Vincent Millay and hence venture outside Warwickshire (no bad thing: we don't after all have a monopoly on good writing). The overall impressions include how Wes & the band make each piece sound like it was written as a song: obviously the better known poems were already known to me as such but the ones they introduce me to could easily have been presented to me in other contexts & I'd have taken them for songs. The settings vary from the classical, through folk, jazz for one piece by the jazz loving Larking to more Irish settings and shanties, yet the distinctive Mechanicals sound is evident throughout.

Can't wait for the new album nor to see them again.

Well here I am again, this time reviewing not one but two artists on whom I fear I may have already used up my supply of appropriate superlatives in ...
[3 images] END_OF_DOCUMENT_TOKEN_TO_BE_REPLACED