This year it's going to be massive


This year it's going to be massive 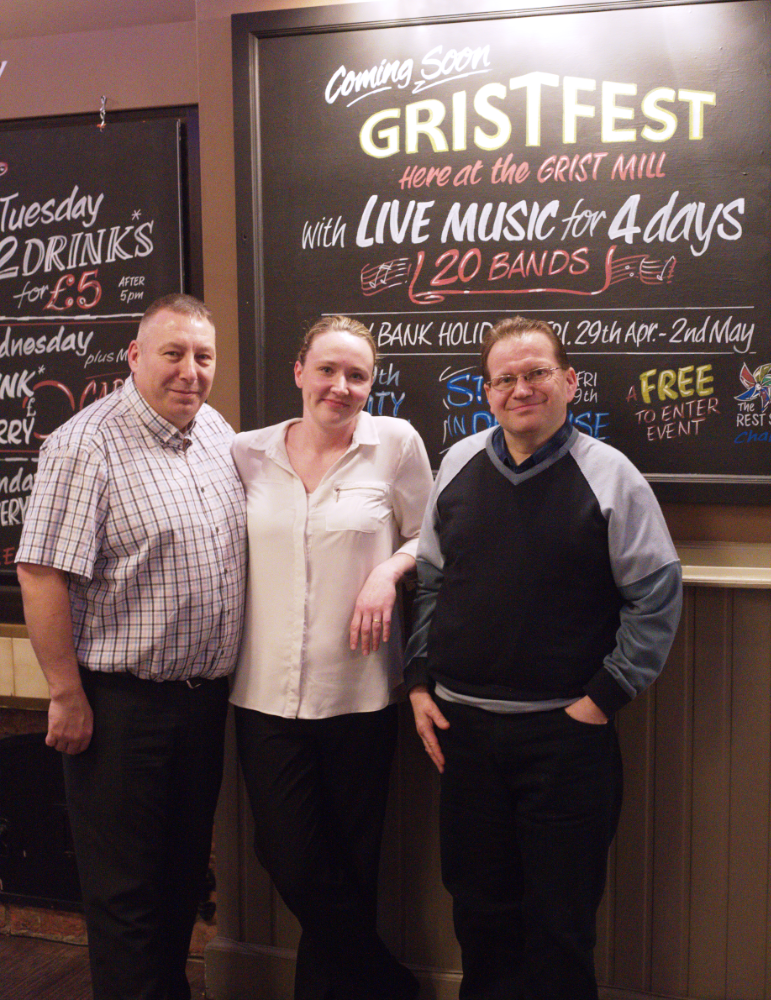 In 2014, Peter Drew got 5 local acts together to raise money for Myton Hospice. Last year, he got rather more ambitious and signed up 10 bands and 8 acoustic acts to play a small festival at the Grist Mill in Sydenham. That's pretty cool but this May bank holiday, on the 29th April to the 2nd of May, he's planning something really spectacular. With more than a little help from his friends, he'll be back with GristFest 2016, bringing over 30 fabulous local acts to 2 stages over 4 days of a free-to-enter festival intended to raise funds for local support group Rest Stop. So about those friends we mentioned… Firstly, Clive and Kim Brookes, managers at the GristMill have been amazing in not only making the pub available but also for getting together a fun fair, a barbecue, a bouncy castle and, wait for it, a gunge tank. Yup, there are plans for the gunge tank - if you're any sort of local celebrity, watch your step! Respect too to Cllr Simon Button, deputy mayor of Whitnash, for handling management challenges beyond the call of duty. Other willing volunteers will include the talents of stage manager Jack Hobbins, PA guru David Duquemin and sound man Gary Tedstone and music photographer Andrew Lock. So who's playing, then? Peter's gone for a rich "cross-over" mix of local performers, marrying up experienced acts and newcomers, classic and contemporary genres, and electric and acoustic formats. Among many other respected acts, look out for classic rock from the Roadhogs and the Intruders, 60's magic from the Harry Rag band and the New Wombats and some hot blues from the Sam Powell Blues Band, Henry's Rhythm and Blues Band together with Rena and the Renegades. You can also expect some cool soul music from Chain of Fools, Jamaican spiced sounds from Grassroutes, and ska-flavoured punk from the Shots. Sunday is chill out day and Peter's enlisted a fine selection of local acoustic talent including Paul Whylie, K2, Kirstie Dakin, Ellie Reed, Lucy Marie Anderton, Magik River, Warwick Junction, The Rushmore, Taylor Louise, Levi Washington, and Matty Coles. It's not just about musicians on stages though; the festival kicks off on Friday 29th with a lively auction, a performance from Stars in Disguise and a disco from Cybertones.And if all this isn't enough for you, watch out for Whitstock at the Plough and Harrow later in May on the 28th and 29th. This isn't a one-off for the Grist Mill either. Check out their regular Saturday night gigs with local heroes like the Sam Powell Blues Band and the Harry Rag Band. It's a great venue too, smart and friendly with plenty of comfortable seating and good pub grub.Of course this whole musical spectacular has an important purpose. Starting out as a group of Mums with a mix of special needs and able bodied kids, ‘Rest Stop' is working towards setting up a centre that offers facilities and experiences for kids with disabilities, together with their siblings and families. Francesca Anker describes a vision that includes a large indoor ‘sensory room', a fully accessible outdoor play area, a cafe that caters for kids with special requirements such as puréed food, and a nature garden. The big idea is to create an environment where young wheelchair users can play freely together with their families. The Rest Stop vision won't happen without donations, so get yourself down to the Grist Mill in May, chill out to an outrageously fine line up in the Spring sunshine while helping the organisers get to their target of £6000.Meanwhile, Peter has some advice for local acts starting out. Firstly, build a network by developing good relationships with landlords, promoters and other musicians. Work hard and promote yourself, "If you're good at what you do, it'll shine through". See the bigger picture, the scene as a whole, "Be a collective, be a team". Of course, you need to be reliable too, turn up on time and do whatever you commit to. (Peter's never cancelled a gig for any of the bands he manages - even for a higher paying opportunity. It's just as important not to price yourself out of the market. You can not only miss out on gigs and but also make it harder for other acts to get work. As Peter says, "You don't make any money in this business, you just do it for the craich." Finally, look for a mentor who can pass on their experience about how the scene works as a business - and if you're an experienced act yourself, make the time to hand on what you learned from others.As we wrapped up, I asked Peter which acts we should be looking out for. He recommends checking out Taylor Louise, ("Great acoustic artist"), Levi Washington ("A great guy"), Chalk Drawings ("A brilliant trio") and Matthew Coles ("Superb"). Other picks include the blues duo K2 , Paul Wiley, Concrete Boots and the wonderfully named Too Fat To Kidnap. Trust the man's ears and check these people out!
Web

For the second time this year The Grist Mill in Leamington Spa played host to a weekend-long live music charity event and despite the weather meaning ...
[12 images] END_OF_DOCUMENT_TOKEN_TO_BE_REPLACED