Paula Oakley has taken photographs of the following acts: 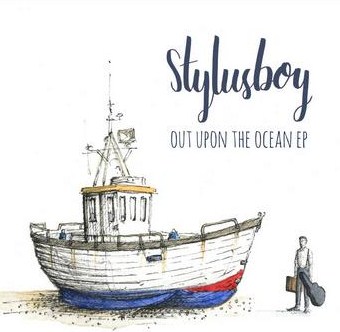 Writing for a music magazine in Coventry & Warwickshire, which is let's face it pretty landlocked, I don't expect to review many maritime themed releases & yet here I am finding myself doing so twice in a single week. Last week I told you of the marvellous "Lost At Sea" EP by Izzie Derry & here I am writing about the "Out Upon The Ocean" EP by Coventry's cult "lo-fi folk music"writer & performer Stylusboy. The EP is released on 10th May (though available for pre order on Bandcamp)

The title track will also feature on his second album ‘Routes' which is released in September. Clad in excellent artwork by Paula Oakley, there will also be a limited edition CD available.

Apart from this song, the EP contains three live recordings which do portray Stylusboy as many of us know him: a really thrilling live performer whose songs come alive before an audience:  "Embrace the View" (recorded at BBC CWR Introducing), "For the Souls of my Brothers" (a big favourite of mine & recorded at The Green Note in London) as well as "Lantern" (from the same venue.)

The song "Out Upon The Ocean"  is in fact a bit more overtly aquatic in lyrical references than Izzie's songs, and contrasts with hers in that her songs have the choppy rhythms of the English Channel while this one sails on a more serene surface: though of course the maritime imagery is largely metaphorical.  Holly Hewitt, no strange to reviews in this magazine provides tasteful backing vocals behind Stylusboy's instantly recognisable lead singing. The instrumental accompaniment is equally tasteful, being intertwining guitars (the song will of necessity be performed by a solo performer of course so extra arrangement features would be a bit superfluous for practical reasons yet wouldn't add anything to a gem of a song anyway). Rather wistful in tone, the song doesn't actually remind me much of any of the other writers he cites as influences. They may have that role for him, but he doesn't copy them: he is another of those great unique voices we have around here at the current time.

You can see Stylusboy live twice this summer at the Magic Lantern at Temperance in Leamington, on each occasion as a special guest of kindred spirits: on 18th May supporting Wes Finch and on 19th July supporting Irene Rae.