Paul Ingram has taken photographs of the following acts: 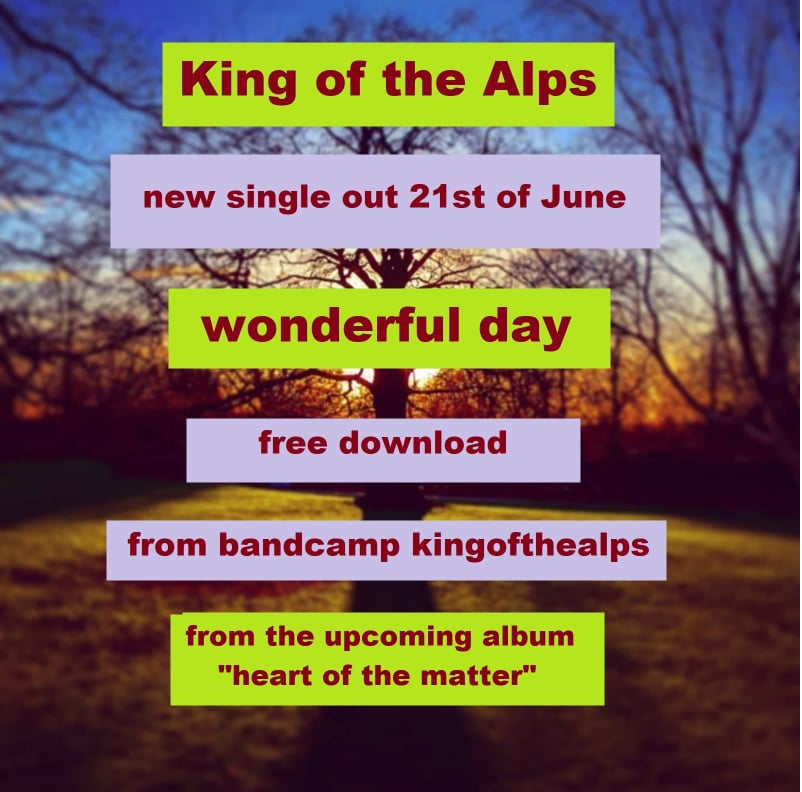 In one of those interesting serendipities which real life offers us occasionally, not twenty four hours after reviewing the debut solo single by King of the Alps bass player Simon Ward, ("Always Be Coventry") than I hear from his colleague Paul Ingram regarding their imminent new single (it's out on 21st June) called "Wonderful Day": and the extra good news is that you can download it free from their Bandcamp page.

Not only is this their first release since "Happy Christmas, All Will Be Fine" (I imagine you can work out when that came out), but it is the first track to be shared from their upcoming album, ('Heart of the Matter') their first since their debut ‘Matters of the Heart' some five years ago (though one must certainly not forget their highly regarded EPs ‘Beauty Scarred' ‘The Sun Will Rise Again' and ‘Longing Laughter' the last of which preceded ‘Matters of the Heart'). It's great to learn that despite recent events, they have kept on steadily writing & recording, though unfortunately not gigging.

The lyrical theme too is most welcome. Taking up where its immediate predecessor left off, the message once again is unambiguously optimistic. Bearing in mind that Paul's earlier songs for the band (especially on the debut album and ‘Beauty Scarred') were generally more complex in tone and emotion to the point where ambiguity might well be detected and certainly not necessarily optimistic, this is quite an evolution. It might be that he has got songs of that sort out of his system (the first album definitely had a theme based around experience and the title and this certainly spilled out of the confines of the collection into its successor). Now instead of a combination of wound licking and rueful reflection, we are getting material which suggests an enjoyment of life and an assumption that this state of affairs will endure: if one can discern a pattern out of only two tracks…. At any rate, if that is the aim, it is appreciated right now. I'm also guessing that the inversion of the words in the album titles may not be without significance too.

The tonal shift in the lyrics does not however mean that the music has veered into the middle of the road. Perhaps inspired by similar feelings as Neil Young who once said of that part of the musical highway "..travelling there soon became a bore, so I headed for the ditch. A rougher ride, but I saw more interesting people", King of the Alps have always seemed to eschew the comfort zone on their musical journey and their songs usually shift & evolve in unconventional and unexpected ways, unsettling the listener at times and thereby forcing them to really pay attention while at the same time mirroring the less comfortable aspects of the stories being told.

"Happy Christmas, All Will Be Fine" was probably the zenith of this approach and in reviewing it, the best description I could come up with was comparing it to experimental jazz. "Wonderful Day" is by no means that far out on the sonic spectrum (probably wisely) and its arrangement swings back towards the poppier end of their work generally with memorable guitar figures and Simon's trademark restless basslines propelling the tune into various directions throughout. The drum sound is actually to my ear quite dance orientated and despite the obvious differences in instrumentation etc, for some reason the track reminded me of some of New Order's lighter moments. However that said, the King of the Alps approach to arrangements is still there: and that's almost by itself why the song still has a slightly disconcerting edge to it: the necessary bite to elevate it to the levels we expect from the band. Part of this effect may simply be psychological on my part: the weight of their previous oeuvre compels me to expect shifts and surprises, but on close & repeated listening, the movements and skews are still there: often quite subtle, but the song is constantly morphing and I'm not sure even the parts of the structure which you might expect to repeat are precisely the same each time round. And that's without taking into account the usual unexpected changes and developments in the melody.

So there you have it: new King of the Alps: working at several levels: an attractive poppy summer song for the end (we hope) of restrictions (I can't help thinking that the selected release date is no coincidence) yet with plenty to keep the aficionados of the band licking their lips. I can't wait to see what directions the rest of the album will take. I'm expecting some of the unexpected.