Josh Leach has taken photographs of the following acts: 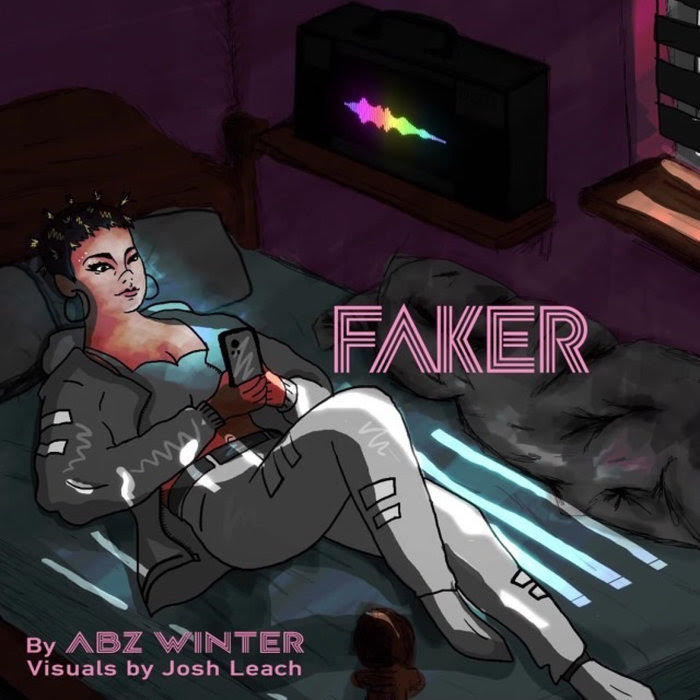 It's actually been a year since we shared the news about "Jump" by Abz Winter with you, a period of time between releases which would have seemed ludicrous eighteen months ago, so meteoric was her career at that point with regular new tracks coming out, each a noticeable progression from the last (though of course her track "Falling For You" has appeared on the 'Front Room Sessions' album during that time).  I'm sure that such a gap was far from Abz's thoughts let alone her wishes but on the evidence before me, I don't think her momentum will have stalled too badly: it certainly has continued its inexorable rise artistically judging by the sound of the latest single from what I gather have been highly productive sessions namely "Faker" (available for pre-order from 16th April & released on the 30th).

Written & performed with her equally high levels of self confidence, "Faker" offers us all the hallmarks of the trademark Abz Winter style we have grown to love: the exuberance & huge personality of her vocal performance, the wit of her lyrics and the way she addresses her subject. Not for the first time in one of her songs, Abz is calling someone out on their behaviour, but as ever, there is a calling to account for sure, but without malice or nastiness: she keeps the moral high ground & wants them to reform.

I've long admired her skill with word play & ability/willingness to use multi syllabic words which many writers either don't know or can't figure out how to use: it adds distinction to her writing & enables the songs to stand out. "Faker" is one such example & in addition another effect is to inject enough good humour to raise the track above the level of a scolding. Not that Abz necessarily minces her words: there are two edits I've heard: one for the radio & another a bit more adult in its language.

Musically, once again she has jumped forwards: Abz has found new sounds to set her words to & again the warmth of her singing acts nicely as a counterbalance to the often icy electronic setting. Slowing things down a bit from recent releases, the effect is to accentuate the lyrics & empower their meaning: they simply would sound false if delivered faster. Likewise, Abz, who has a large arsenal of vocal skills to unleash as necessary, shows us just how powerful she can be at slower speeds & lower volumes.

If "Faker" is representative of her latest body of work, then I think we are in for many treats & surprises in the weeks & months to come now she has new material to share again…. And don't get me started on how good it might be to hear her sing live again.

In the meantime, do check out the video for "Faker" at https://www.youtube.com/watch?v=HcxydVnDQbw