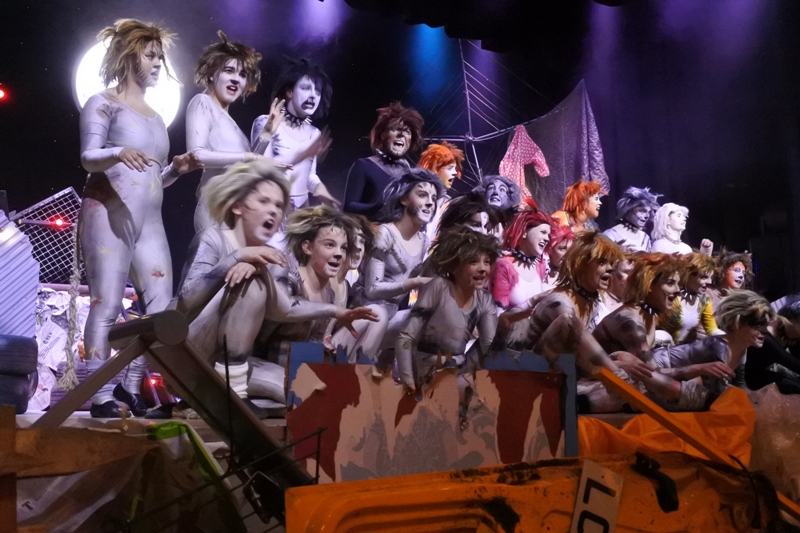 In 2008, a young man with a passion for theatre started his own acting project, although he had produced and directed a play at school when he was only nine. Ethan J Smith began with low-key variety shows in his garden barn in Rugby, testing the water with original murder mysteries and a musical he wrote aged 15, before making Five Star's mark on the local theatrical 'scene' with his 2014 production of "Cats". Ten years later Five Star Theatre has produced twenty shows. Big shows such as, Singing In the Rain, Shrek The Musical, Fiddler On The Roof, Annie and many more plus smaller projects for schools and the like.

In the Pride of Rugby Awards 2015, Ethan was a finalist for both Young Achiever of the Year and the overall Rugby's Pride Award, as a result of his commitment to youth theatre.

The Five Star Theatre production of "Cats" is so much better than might be expected at first glance from a group of teenagers. It is slick, precise and professional. I had not seen the show before and hadn't appreciated just how complicated the libretto is. This is combined with the cast almost permanently dancing whilst either singing or reciting TS Elliot's poems. Lloyd Webber's music doesn't make it easy for the youngsters either. They not only rise to the challenges, they soar above them. The costumes and make-up are  brilliant too. The set not only covers the stage, but extends out into the auditorium, it is a very authentic representation of the junk yard in which the cats live. The cast make their entrances and exits by actually climbing through the set. We have all seen how cats cans  find their way through the smallest of cavities in a fence or under a shed. It is much the same in this show. The whole thing is amazingly inventive.

The acting is spot on too, even the ensemble not engaged in the main action are choreographed to make cat-like movements all the time. The dancing is superb, whilst the singing has to be heard to believed. The style of music goes through the realms of mysticism to chant to jazz, even for a moment or two, Rock 'n Roll. The recorded sound track is relentless, but the kids hit the button every time.

I hesitate to pick out highlights, but there are some. The pas de deux featuring Joseph Jones and Emily Gyles almost defies description. They frolic through their number in a most energetic and well-timed way all the time singing in authentic but hilarious accents, Respectively they play, Mungojerrie and Rumpleteazer. Emily in particular exhibits a flirty side, while they both have a sense of comedy. On the night I was there, their efforts were rewarded with a particularly big round of applause.

There are moments of reflection in the show as a balance for the fun, Shane Kenny-Costello held the stage with his "Moments of Happiness"  as Old Deuteronomy in company with Jemima (Isabella Awang).  The famous song from the show is "Memories" sung by Grizabella, she is not liked by the other cats and she is physically not able to dance like the others. There is one moment when Sophie Roberts gives a truly wonderful display of one trying to join in, but not quite managing it before disappearing into the wings, in despair.  The reprise of "Memories" in the second half is a very emotional performance, the anguish Sophie puts into this casts a feeling of pathos over the whole room. It was a "hair standing up on the back of neck" moment.

Typical of the cast are Rugby teenagers, Julien Carrouche, Grace Hargreaves, Tiegan McCann, and Cait Bridgman. playing Munkustrap, Demeter, Victoria and Cassandra respectively. All seventeen, they found out about the company through friends being involved. Sometimes a poster in a shop window will attract new members such as Sophie Roberts from Daventry who plays Grizabella and sings the song made famous by Elaine Paige "Memories." Her brother, Sasha is also in the show playing Skimbleshanks. Those who have read my review of Sister Act may perhaps remember my reference to a local choir, The Strawhouse Singers. Two of the cast of "Cats" are also current members of that group. Many of the young people in the show have other projects in which they are involved.

I was impressed with the lengths Five Star Theatre go to in safeguarding the youngsters. Chaperones are there to ensure the member's safety. Parents should have no concerns should their child wish to join. The company has a pool of professionals to guide the cast in both the art and the technical side of putting on shows. Some of whom also take part in the productions.

Cats continues it's nightly run until Saturday 31st March with an additional matinee on the Saturday. Tickets are available from the  Box Office: 01788 533719  or Book online at www.bennhall.com It is a super show.

It may be a chilly November afternoon but here in Rugby's lively Bacco bar I'm getting warmed up by a lively discussion with Robert Low.
[1 image] END_OF_DOCUMENT_TOKEN_TO_BE_REPLACED