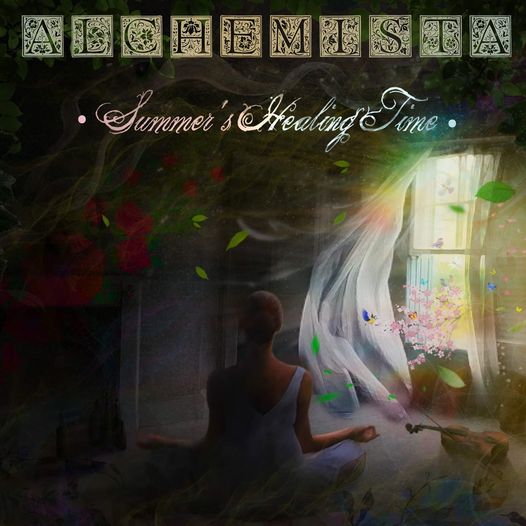 It was last April that Alchemista were last able to put together all their considerable talents and release the rip roaring pirate themed single "Calico Jack". Now they have finally been able to follow it up (it has taken a year to manage to record the new track) with "Summer's Healing Time".

Written by keyboard player Paul Jayes and vocalist Caroline White, the song dates from one of the many strange eras we are successively enduring, being a snapshot of emotions from just before the second lockdown when hopes of vaccines & good weather offered hope of an end to the pandemic for Summer 2021…… well we all know how well that panned out, but as fate has had it, the song still works just as well by transposing the optimistic predictions from that year to this one. I certainly hope they are right.

As much of the theme is around "COVID-survival", in fact the track actually has more resonance given the accumulated additional sadnesses piled up in the interim.

Performed of course by Caroline, Paul plus Pete Garelick (guitars), Colin Halliwell (drums) and bass player Matt Molland with production by Colin and Caroline & sound engineering by Aaron Clews of Daybreak Studios, "Summer's Healing Time", possesses the upbeat swing that the subject needs and brings rays of sunshine into the cold & dull January day on which this review is being written.

Something of a development for this "melodic rock" group, the song goes (successfully) for a more soulful feel (they had Motown in their minds while creating it) and certainly has elements of that 1960s West Coast ambience to my ears. Just what we need.

Like I say it swings (and that is often a missing element in songs) and soars upwards towards the sun. If Caroline in particular seems to be relishing singing it, then I think the rest of her bandmates were enjoying themselves too judging by the infectious groove they work up.

When Colin first played me this, amongst the first words which sprung to mind (the others are dotted about above) was "dignified". At the time, this was an instinctive response, more from the subconscious than anything & I'm not sure I understood myself what I meant by it. However on reflection, I think I was trying to express how Alchemista had identified what they wanted to say & how it could be best expressed and consequently had no great desire to over-egg the track with excessive nor exaggerated emotions: it is a strong message and stands on its own two feet without need for over production nor showboating. In fact Colin informs me that they tried hard to avoid too much production trickery and I'm certain that was a tasteful & successful approach. It preserves the emotional truth of the song.

Caroline's voice of course is the key to getting the honesty of the words across and she does it very well, without as I say any theatricals. Going back to the 60's West Coast feel I detected, she sounds a little like Grace Slick in her delivery to me & again such a response on my part probably contributed to nudging me towards coming up with "dignified".

Alchemista are a classy act & put a great deal of effort into crafting perfect songs, realised by excellent musicianship. If, especially during the pandemic, this has meant hearing a lot less from them than we'd like, then we can perhaps console ourselves by categorising their output as favouring quality over quantity: the ratio I personally favour.

I admit that twelve months ago, I too had optimistic visions of the summer of 2021 (I guess many of you did too) & despite those being dashed, I retain them for the coming months: stimulated by this beautiful & uplifting song. I hope their predictions come to pass & in the meantime, this excellent track can not only brighten these dark days but endure into the summer in question as without a doubt it is a classic song for such a season.

Check out the video too at https://www.youtube.com/watch?v=fngEgg_7d_8

For their first single release of 2021, Alchemista are offering us a tale of piracy on the high seas in the form of "Calico Jack".
[1 image] END_OF_DOCUMENT_TOKEN_TO_BE_REPLACED

Relatively hot on the heels of October's ‘Clear Skies To See' EP (certainly rapid by the standards of what is possible in 2020) ...
[1 image] END_OF_DOCUMENT_TOKEN_TO_BE_REPLACED

I really hope that like me, you enjoyed the popular track "A Place To Hide" on ‘Hot Music Live Presents Volume Four'? If you haven't ...
[1 image] END_OF_DOCUMENT_TOKEN_TO_BE_REPLACED