"Together At Christmas" by Chasing Deer 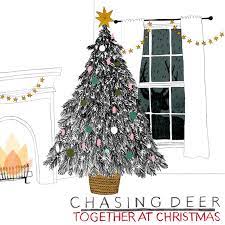 As a Christmas treat for us, Chasing Deer have decided to re-release their 2015 festive single, "Together At Christmas".

In case you missed it half a dozen years ago, this ballad is a duet between the voices of Rob Hodkinson & special guest Sophia Vassalos.

Thankfully, rather than one of those desperately attempts at jollity bedecked with Yuletide clichés of music and lyrics (can you really imagine Chasing Deer doing that?), what we get is a plaintive piano centred song around the theme of separation and yearning for reunion: much more the band's trademark.

Naturally this sort of narrative could apply at any time of the year, but their point here is that at a time of year traditional for people getting together, being apart feels that much more raw and set against the winter weather, it can make it seem even worse. It's a heartbreaker & Sophie's vocals blend really well with what the band's fans will be very familiar with in terms of Rob's emotive & passionate singing: it's a shame they haven't done more like this, but of course it would be very difficult to include duets in a live set on a regular basis. As it is, "Together At Christmas" serves as an interesting contrast with the group's male led songs & illustrates the breadth of what they can create.

And I think, quite apart from the point about a COVID19 centred Christmas making this sort of story all too likely & hence the single particularly evocative this year, the value of re-releasing the single is that Chasing Deer have actually come a long way in the last six years. Without carrying out an in depth statistical research project, I suspect that the majority of their very many admirers will have come across the band since this single was first out, & therefore dipping into the back catalogue to introduce them to gems from earlier days is no bad thing.

I have not had a chance to review a Chasing Deer release for you since "Scared" came out in December, so I'm pleased to do so now in reaction to ...
[1 image] END_OF_DOCUMENT_TOKEN_TO_BE_REPLACED

Unsurprisingly, I've not had the chance to review a new Chasing Deer release since their "Bad Decisions" way back in February.
[1 image] END_OF_DOCUMENT_TOKEN_TO_BE_REPLACED

It's really good to return to "Hot Music Live" regulars Chasing Deer after a while.
[1 image] END_OF_DOCUMENT_TOKEN_TO_BE_REPLACED

I do hope that you'll remember about two years ago Paul Englefield interviewed one of the most exciting local bands from our area Chasing Deer ...
[1 image] END_OF_DOCUMENT_TOKEN_TO_BE_REPLACED

Us lucky, lucky people at Hot Music Live got to check out the new Moving On EP from Chasing Deer.
[1 image] END_OF_DOCUMENT_TOKEN_TO_BE_REPLACED