Elizabeth Cornish and Beth Dyson at The Tool Shed Cafe


Elizabeth Cornish and Beth Dyson at The Tool Shed Cafe 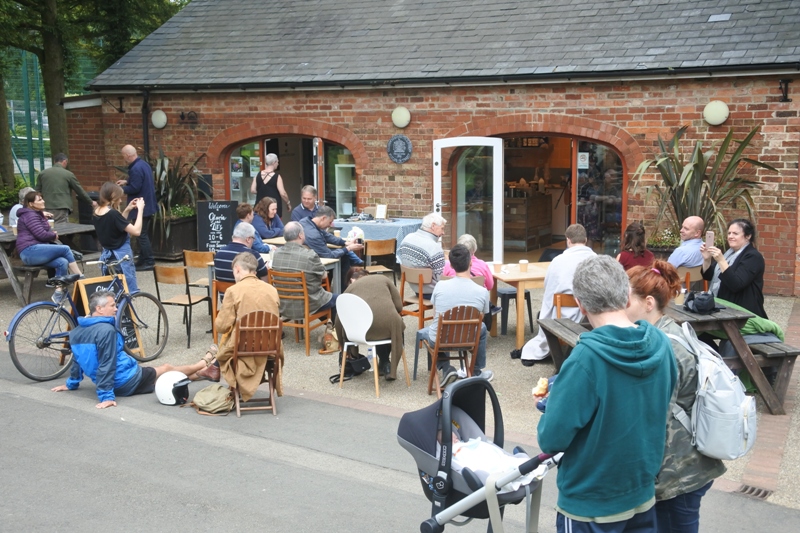 Elizabeth Cornish at the Tool Shed.

What do you do if you take over an ailing, out of the way cafe, with no street presence, but placed in the beautiful Caldecote Park in Rugby? If you are an enterprising pair like Emma and Eilis, you revitalise the menu to include a wide range of drinks, home made fresh cakes and more, then you set about creating your own regular custom by making it a scene for events. Having been in charge for about twelve months, the "Tool Shed" cafe (I can remember when it was just that by the way), now boasts a film club, hosts story telling sessions and relevant to this piece, is now a music venue. Regular concerts are held on the first Sunday of the month throughout the year. It says much for the regard in which the place is held that they can attract artists of the stature of Elizabeth Cornish. Some members of the audience had travelled some distance to attend this rare midlands gig.

Originally from Leicester, but now living in Freiburg im Breisgau, Germany, an entry point into the Black Forest, Elisabeth Cornish is a singer/songwriter, whose style is just right for a laid back Sunday afternoon in the park. This was the setting for ante-penultimate UK date in her tour to promote her latest album, "Where we were then."

This softly spoken young lady granted the audience at The Tool Shed Cafe in Rugby a set which included many of the tracks off the home produced album. She is delighted with and justly proud of the final product. The album contains some love songs, including one about her Grandfather going off to war. "English Rogue" is not a love song in the conventional sense, but the emotional connection is emphatic and raw.

All her songs are crafted from well observed and heartfelt understanding of things that happen around her. The titles range from enigmatic single words such as "Light," "Blueprint, "Tired," and "Home" to the more explicit "For The One That I Love" (which she sang at her own wedding) and "We're Not Perfect." Each song stands in it's own right and has it's own story which is explained perfectly to a listening audience. Halfway through the recording of the album, disaster struck, when an accident at home resulted in a broken hand. This is a strange co-incidence as she is the third artist I have heard about who has suffered a similar injury this year. Luckily playing guitar is perfect physiotherapy to help recovery. The whole set was delightful and perfect for a Sunday afternoon in the park.

Supporting Elizabeth was Beth Dyson, who accompanied by Rugby Guitarist, Joanna Litten, ran through a number covers of well known songs. I had seen Beth once before, early in the new year when sadly technical issues truncated her set to a mere three songs, but I heard enough to recognise a quality voice. This time we were treated to a performance of a more conventional length. "Sweet Home Alabama" was the lively introduction to a set that included contributions from Amy Whitehouse, The Zutons and The Killers. By the time Beth had reached her third song, she had settled nicely and Bryan Adams' "Summer of '69" was at it's rhythmic best with an outstanding accompaniment from Joanna.  We then visited Nashville for Dolly Parton's "Jolene" displaying the fact that Beth is happy with many different styles of music and her voice carries each one with panache. Her closing number was Jessie J's "It's Not About The Money." which was just as well because the gig was free entry. Beth, who so nearly gave up singing a year ago, (I'm so glad she didn't) has written some of her own songs but has yet to perform any of them in public. I hope that will be rectified within the next ten days or so. Watch this space.

It was a lively and thoroughly enjoyable gig with performances from both women which were both uplifting and thought provoking. The next gig at the Tool Shed Cafe is on 1st July when the headliners are "Wax Myrtles Special Structure" A female trio from Rugby who like to have "a bit of a sing and a play"  They are to be supported by Sean McAusland a keyboard/accordion player with a couple of local bands, it sounds likely to be a good event to attend. Like all gigs at the Tool Shed, is it free entry.