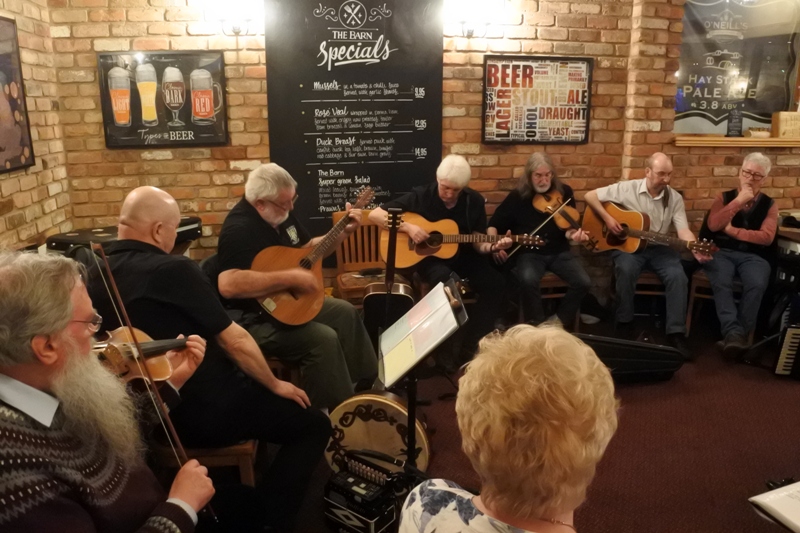 What do local folk musicians do on their night off? They turn up at a Sly Old Dogs & Friends gig, sit in a (sort of) circle and entertain each other. Any non-musicians who happen to wander into the room are in for a good night.

This was the case on Sunday 25th March 2018 at The Barn, Coal Pit Lane, Willey. The venue is a pub-cum-restaurant-cum-brewery having a large room ideal for such an informal gathering. Musicians from all over the area gathered for an evening of "anything goes" music. This night it was primarily led by Pete Willow and Nigel Ward, who each play in different bands during the week, it is a singaround par excellence. John McIntosh bass player and raconteur was unusually absent and sent in his apologies, but as Pete remarked, it was about time he apologised for something.

The format is the assembled orchestra (which is comprised of whoever turns up) starts off the proceedings with a well known number just to get everyone in the mood. Then  progressing around the room with each one of the gathering leading or performing a song, poem or joke. The mutual understanding is anyone in the room who knows the song (and sometimes even if they don't) joins in and very often the whole room is accompanying the singer.

The fun starts at 8.00pm and normally consists of "three halves" with suitable beer breaks until 11.00pm. This night we were working under strict instructions to finish by 10.30pm due to staff shortages in the bar. Is there anything worse than a staff shortages in a bar? I suppose running out of beer could be worse, but that is most unlikely to happen because at The Barn, they brew their own.

The Barn is having a renaissance, having succumbed to a hiatus last year. It is now under new management and running smoothly again having been doing so for about six months or so. An independent, family run pub and restaurant, with an on site brewery! The O'Neill Brewing Company was established in 2017 and brews a range of ale to suit all tastebuds. Come down and try their fantastic drink range, gorgeous grub and enjoy the newly refurbished, family-friendly venue.

I had attended one of these nights previously at their other venue The Humber Inn, in Humber Road Coventry, they alternate between the two, next month for example on 29th April, the gathering is at the aforesaid Humber Inn. There is no obligation to do a solo spot, although on this occasion, I did, for which I apologise.  Friends, family and other members of the public are encouraged to attend if only to swell the bar takings. If they do attend, they can be rest assured that there is no admission charge and they will be royally entertained. Some (most) of the musicians gathered display inordinate levels of skill on their chosen instruments and us lesser mortals can only sit in awe at their dexterity. There is no doubt in our area, acoustic music is alive and well, indeed thriving thanks to those eminent souls who give up their spare time to let us without those skills sit at their feet and be educated.

I will refrain from naming any of the players lest I miss someone out and that would be horrible, however you may recognise one or two from the pictures attached to this piece. I am indebted to John B Smith, that excellent photographer for some of them, my more paltry work is also present.

It was a good night and much to my surprise, some friends noting I was going to be there turned up to offer their support and encouragement. I will undoubtedly go again. A remark was made by one of the audience afterwards that the "soloists" should have played to the room rather than the circle. A legitimate concern as it happens, but the nights have developed to the extent that the audience is getting bigger, which is a good thing, but they will have to be catered for in such a way that doesn't infringe on the intimate atmosphere which is so vital to the success of the evenings.