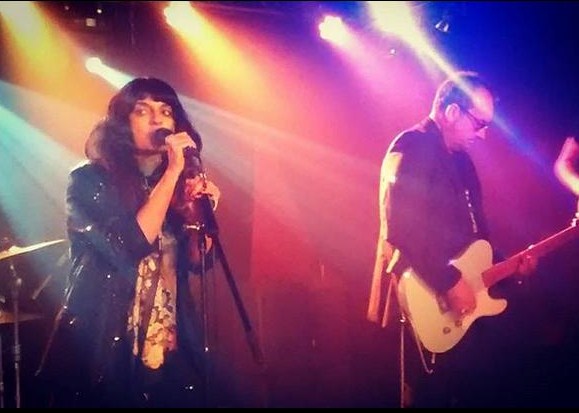 I've said it before, but it bears repeating that the APE nights promoted by Johnny Satsangi represent the best musical value for money around. Six great acts for £5? Where else can you get that? And probably the best gig poster I've seen in a long long time too, from the design of the promoter & the man responsible also for the "Alternative Sounds" album sleeves for the ‘cream of Coventry & Warwickshire music, past, present & future' compilations.

And it's not only value: it's quality too. APE acts are always excellent & tend towards the cutting edge with the best of local original talent plus regular guest appearances from acts from further away who add additional edge and an atmosphere of surprise each time.

Tonight's APE offering, the "APE Surreal Deal" at the Zephyr Lounge,  saw Chalk Drawings (more later of them), Stylusboy, the Hungry Ghosts, Satsangi themselves, the energetic Leeds based China Shop Bull who got the crowd moving equally energetically & the enigmatic & charismatic Mr Binx working his subtle magic at the end: do try & catch him if you can as his appearances seem too few & far between.

The billed "Chalk Drawings" band was actually a collaboration between members of that band and members of Blind Faith (no not that one): apparently this is an occasional thing they do, often under pseudonyms adopted for the night. Presumably there had not been time to create one on this occasion, when they had stepped in at short notice for the absent Dissident Noize Factory. I think it is a commendable idea: the superb voices of Faith (of Blind Faith) and Simon of Chalk Drawings blended beautifully to excellent effect, accompanied by keyboard & bass of the highest order & taste plus Simon's guitar. Each component band is worth your time as are these collaborations: probably best following them online to find out more given the name changes. Tonight, probably due to the circumstances, the set had several covers (unusual for APE nights) but the originals particularly made it for me.

Stylusboy probably needs little introduction: he has been pleasing audiences in our area & beyond for quite some time now and many readers will know his highly individual style: he calls it "indie folk" but frankly it is in a category by itself, with highly idiosyncratic songs accompanied by distinctive guitar playing. My favourite was a moving song ("For the Souls of My Brothers") about his Great Grandfather's experience as a firefighter in the Coventry Blitz and his cover of the Huey Lewis hit "Power of Love" was, to reuse the word as it's the best word, idiosyncratic. He is currently recording with other local musicians including Holly Hewitt so look out for an album soon.

Here's a link to a free download of the song about his Great Grandad https://stylusboy.bandcamp.com/track/for-the-souls-of-my-brothers-live-at-the-manor-house-free-download

Tonight's jaw droppers were the Hungry Ghosts & I do not exaggerate. Every audience member & artist I spoke to after their set was hugely impressed by this stunning outfit from Birmingham.

In many ways they are an archetypical APE act: original, uncompromising & a long long way from the mainstream. Underpinned with a superb rhythm section of furiously clattering drums & an endlessly ominously prowling bass, there were two guitars on the go on top of that & often three, with the third one alternating with garage keyboards. They describe their sound as "slaughterhouse blues & trash country, music from the other side of the fence" and in fact there are country riffs on show in the mix, though my first instinct was a possible Stooges influence: that would be the music, the vocal delivery & the stage presence of Joe Joseph. However there was a whole deal more than that going on in there: in fact one reason I think Johnny may have invited them was some similarities with Satsangi's approach (though musically they are quite different) with so many instruments adding purposefully & punkishly to the overall sound....

Afterwards I extended an invitation to singer/guitarist/keyboardist Joe & bassplayer Emily on your behalf to visit us again asap. I hope they are able to: in the meantime do look out for them as I highly recommend them.

Headliners Satsangi never disappoint, so you'll not be surprised that they didn't tonight. Perhaps responding to the previous band, they attacked furiously, with a power & pace even beyond their normal performances (I did overhear the odd onstage suggestion about "that was too fast"). However they didn't miss any tricks. Singer Su most confidently played with her delivery of the older material, bringing new emphases to songs like "Chant" and it was great to hear a couple of the newer songs currently being worked with at Woodbine Studios with John Rivers for a forthcoming album. "Hallelujah" you might say in fact. Guitars snarled across the width of the stage, saxes ripped into the melodies, keyboards rampaged & the rhythm section swung & roared underneath the lot. What a glorious racket. Can't wait for their album. Can't wait for next gig & next APE night either....

I reviewed (back in November) the most recent single from Satsangi, "World Falling Down" and mentioned a little bit at that time about their ...
[1 image] END_OF_DOCUMENT_TOKEN_TO_BE_REPLACED

Fresh out from Satsangi is "World Falling Down", (their first since they raided their own vaults for the "Don't Want Anything But More" single ...
[1 image] END_OF_DOCUMENT_TOKEN_TO_BE_REPLACED

During these turgid times when there is a distinct danger of every successive day seeming like its predecessor, it's helpful to be surprised now ...
[1 image] END_OF_DOCUMENT_TOKEN_TO_BE_REPLACED

Satsangi, never a band to shirk a challenge nor to be meekly led by fate nor wander aimlessly down roads many others have trodden previously, seem to ...
[1 image] END_OF_DOCUMENT_TOKEN_TO_BE_REPLACED

Well life under lockdown continues to evolve doesn't it: even, or perhaps especially, our musical life.
[1 image] END_OF_DOCUMENT_TOKEN_TO_BE_REPLACED

Some excellent news for lovers of music which dares to be a bit different.
[1 image] END_OF_DOCUMENT_TOKEN_TO_BE_REPLACED

I have often written about the wonderful, in fact the weird, thought provoking & wonderful evenings Johnny Satsangi puts on at the Zephyr Lounge ...
[1 image] END_OF_DOCUMENT_TOKEN_TO_BE_REPLACED