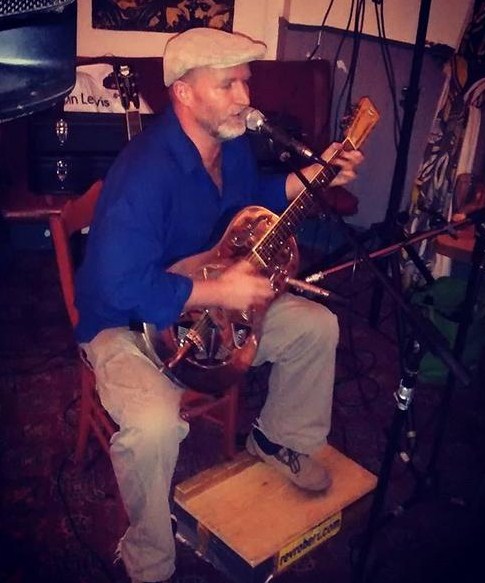 This was something of a coup for Jonny Roden's "Tunehouse at the Townhouse" night: a really interesting specialist musician from Charleston, Illinois, who plays pre World War Two blues primarily but with excursions into other genres contemporary with his main repertoire including early twentieth century jazz, calypso, ragtime etc.

Playing principally on a pair of resonator guitars (I assume with different tunings) and a stomp box (plus added leg sited percussion) with a few numbers tastefully & appropriately embellished with harmonica, the set contained principally songs with which I wasn't familiar, which I feel was a great plus as a variation on "safer" cover bands in pubs, though there were Robert Johnson & Charley Patton numbers in there plus a few more well known ones such as "Junco Partner" and "It Don't Mean a Thing" (although a reworking of Bob Marley's "Three Little Birds", while probably a good idea for a pub audience did seem to me to be a bit incongruous for what otherwise was such an authentically sourced set).

This is emphatically not the sort of fare you get in a (free!) pub gig very often and although the music was of a type (or types) I personally greatly enjoy, I think many others would too: it went down well with what was a full pub at the tail end of St Patrick's Day festivities. It's nice to hear more neglected genres played with such love & technique and it's a testament to Jonny that you get unusual & unexpected treats like this at his venue.

I expect we all agree that music can actually do things to us & for us: improve our mood & morale, lift our spirits, transform our psyches.
[2 images] END_OF_DOCUMENT_TOKEN_TO_BE_REPLACED

I have to admit from the start that I found writing a review which captures the essence of Tigermask adequately, having seen him play at the Town ...
[1 image] END_OF_DOCUMENT_TOKEN_TO_BE_REPLACED