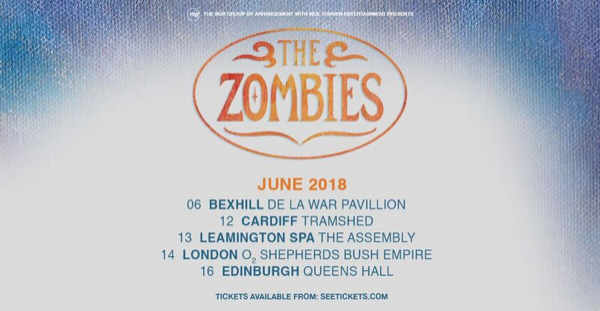 The band's live performances, described by Rolling Stone as "absolutely triumphant", take fans on a journey through time, from their early hits…their 1968 masterpiece Odessey & Oracle…post-Zombies solo favourites…right to today with Still Got That Hunger.

The second U.K. band following the Beatles to score a #1 hit in America, The Zombies infiltrated the airwaves with the sophisticated melodies, breathy vocals, choral back-up harmonies and jazzy keyboard riffs of their 1960's hit singles "She's Not There" and "Tell Her No". Ironically, the group broke-up just prior to achieving their greatest success - the worldwide chart-topping single "Time of the Season", from their swan-song album Odessey & Oracle, ranked #100 in Rolling Stone's "500 Greatest Albums of All Time".  To this day, generations of new bands have cited The Zombies' work as pop touchstones, and the band continues to be embraced by new generations of fans.

Following the break-up of the original band, lead vocalist Colin Blunstone went on to develop an acclaimed solo career (with hits including "Say You Don't Mind", "What Becomes of the Brokenhearted", and "Old & Wise" with Alan Parsons Project) and keyboardist/songwriter Rod Argent rocked '70's arenas with his eponymous band ARGENT ("Hold Your Head Up", "God Gave Rock 'n' Roll To You"), but the legend of The Zombies continued to take on a life of its own.  By the start of the new Millennium, Blunstone and Argent were inspired to resurrect The Zombies.

AMBER RUN have announced an acoustic live show ‘AMBER RUN UNPLUGGED' at The Assembly, Leamington Spa on 10th May 2022 TICKETS ARE ON SALE NOW ...
[1 image] END_OF_DOCUMENT_TOKEN_TO_BE_REPLACED