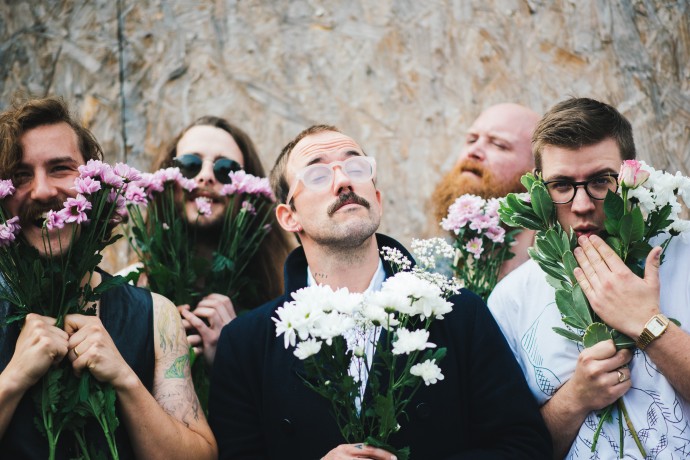 In a time of polarised politics and murky waters; IDLES and bands like them are needed to remind people that it's ok to dance and laugh and sing in the face of adversity.

Bristol's finest post - punk polemics IDLES have been promising to do great things for some time now, and with their debut album "Brutalism" they absolutely fulfil that promise, and a furious promise at that.

Politically charged, refreshingly confrontational and infectiously volatile, IDLES are a band like no other. Bringing the unsettling reality of the world we live in into their frantic assault on the senses, they are a band that until now could only be truly understood by witnessing in a live environment but with "Brutalism" it surely feels like they have captured the intensity of that live sound. Bottled up here are the abrasive, memorable lyrics of Joseph Talbot delivered with all of the spite and wry humour he puts across on the stage.

Dedicated in part to the loss of his mother, who adorns the record's cover, and partly to a perceived decimation of society, from the NHS to public services across Britain, "Brutalism" is a deadly serious indictment on popular culture – Mary Berry, Trevor Nelson and Rachel Khoo are just some of the names referenced here, often alongside the unpleasant, but always amongst the real.

The November 2016 release of single "Well Done" saw the band rise to no.1 on Spotify's Viral Charts & paired with intensive radio support from Huw Stephens, Annie Mac, Steve Lamacq and regular Radio 6 play has brought them to the forefront of ones to watch. NME, CRACK, DIY and more have tipped them over the festive period and the quality here suggests there will be more plaudits to come when the album reaches the shops in March.

From the propulsive opener, "Heel / Heal", and many highlights ("Well Done", "Mother", "Date Night", "1049 Gotho", "Stendahl Syndrome" just some) to the rare respite of the closer "Slow Savage", the album marks the arrival of a true British talent – and in a musical world that can seem increasingly benign, one with so much to say

IDLES are hard to capture, because they're not Fat White Family, they're  not Sleaford Mods, they are very much their own incarnation of uncompromising rhythmical punk rock. Lyrically, a mixture of dry obsessional humour and poetic slogans. But, best of all, they really get the adrenaline pumping. - Steve Lamacq BBC6 Music

A Bristol quintet who sound absolutely furious and thrilling; an inchoate cry of rage, with guitars that could raze the city – The Guardian

Brutalism is loaded with some of the most fiery performances and brutally honest lyrics I've heard in years. - The Needle Drop

A rare rock record with the rage, urgency, wit and shattering of complacency usually found only in grime. – Uncut

Uncompromising post-punks building a massive fanbase across the UK – DIY

One of the best live bands out there – CRACK