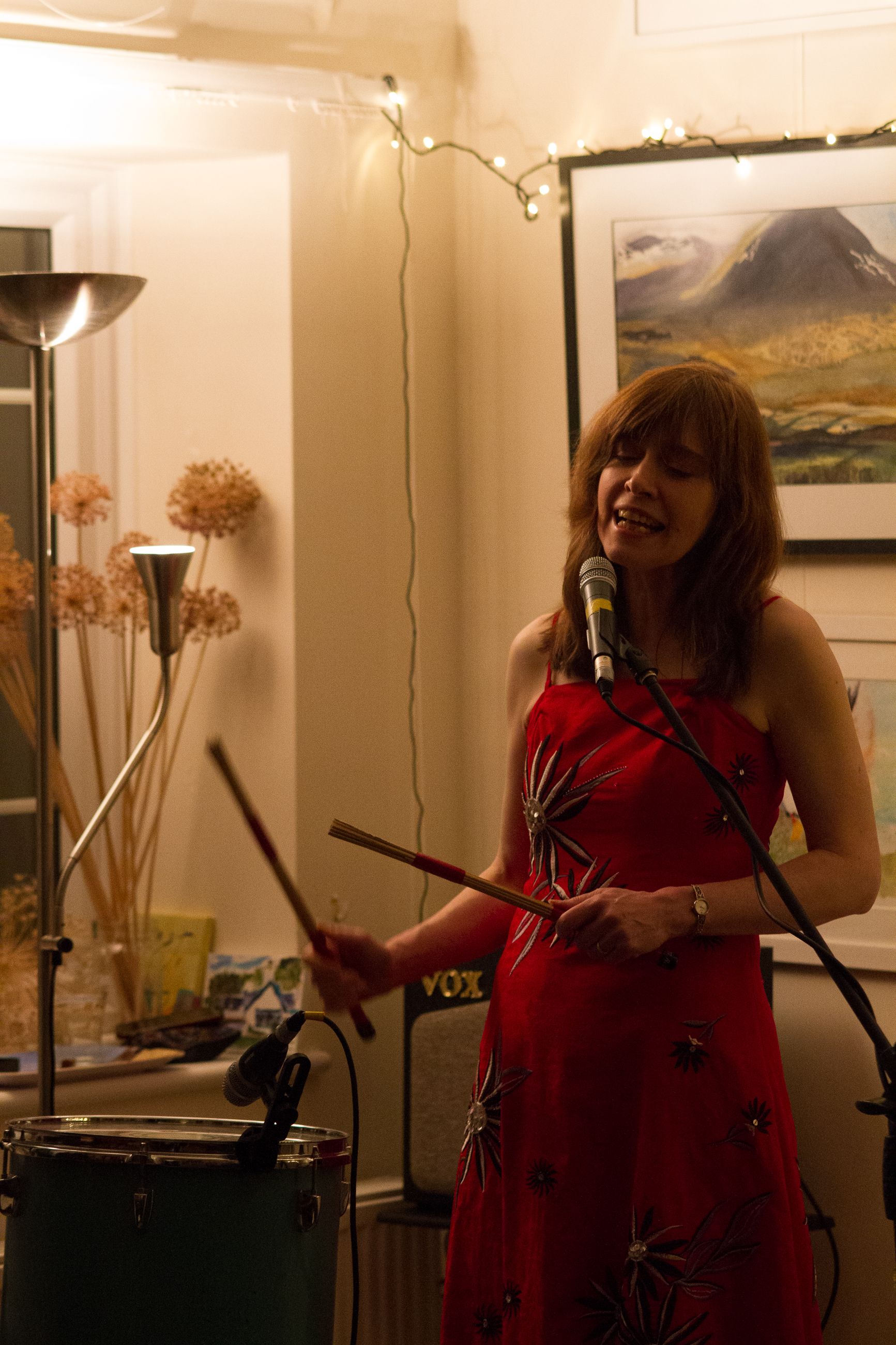 Latest in well established series of house concert in the Warwickshire village of Princethorpe, tickets for these shows are usually reserved limited on a first come first served on a very small mailing of discerning music lovers (how to add yourself to the guest list later). As ever home owner and host is Michael Luntley who delights with revelation of something of a first in that finally after 33 prior shows within his music room that he is able to welcome performance by an award winner to his home.

Sarah MsQuaid 2017 recepient of Ards International Guitar Festival Annual Lifetime Achievement Award in recognition of her innovative use of the DADGAD tuning and The Irish DADGAD Tuning book. Being the most recent winner in the festivals 20 year old history Sarah deservedly takes place alongside luminaires such as Davey Graham, John Renbourn, John Martyn and Gordon Giltrap. Standing centre stage adorned in the same red dress that appears on her latest album "If We Dig Any Deeper It Could Get Dangerous" for the first part of a solo double bill.

Much of the evenings show is centered around this Michael Chapman produced recording, although all of Sarah's earlier work – 5 solo albums and one co-write with Zoe (hitmaker with 'Sunshine On A Rainy Day') represented in an evening of either intricate acoustic picking or at times a darkness within new found talent of electric guitar. The latter instrument picked up on encouragement and now guitar loaned by Michael Chapman whose own 2017 album "50" clearly influences some of the nights edgier rock inspired tones amid set that it would be inaccurate to place solely as folk.

Software has part in looping both various instruments and vocals, in particular the percussion sampled live from single snare. Coupled with the audience invited cat calls and animal noises to make perfect rthym on song written after watching family cat 'One Sparrow Down'. At other times sparing loop of sampled vocals layer upon one another to provide chorus and harmonies, building into cacophony of sound. Hand in providing the gloss is sound engineer and road manager Martin Stansbury who helps deliver experience remarkably close to album production values.

Recurring motif throughout 3 songs forming the core of night's mid-section (and sequenced apprioately on the current album) starts with graceful reading in song written by Jeff Wayne 'Forever Autumn' (Sarah's vivid recount of this song far more charming than any words I could pen tracing it's history). Source of theme found in the 13th century hymn ''Dies Irae', sung in latin, can often be heard in movie theme tunes. Final reprise on electric guitar instrumental 'The Day Of Wrath, That Day'.

Without giving too much of the story away, there is more than a little science behind song 'The Tug Of The Moon', brings end of the second 45 minute set. Dazzling performance throughout now temporarily dims a little for encore, an accapella take of sad lament 'The Parting Glass' it's sentiment 'joy be with you all' still resonating.

Overnight stay for the much travelled singer & songwriter, her current home of England's south west will get left further behind as tour will continue into Europe. However tomorrow will see Sarah host her DADGAD guitar workshop for lucky number (in this instance only 1 seat remains) within the same music room as night's show.

Class night makes worthy addition to long line of previous musicians performing here, sharing some of the honours are Chris Wood, Will Pound, Brooks Williams, The Red Dirt Skinners, locally based bluesplayer Jack Blackman and regular Jim Crawford. The latter Devon based bluesman making return with his wry humour on March 9th for the second of this seasons 4 house concerts.   Prices of admission vary although all door money goes to the artist appearing on the night. With less than 40 seats available for each show early addition to the mailing list is recommended by emailing Michael Luntley via the Sheep Dip website.