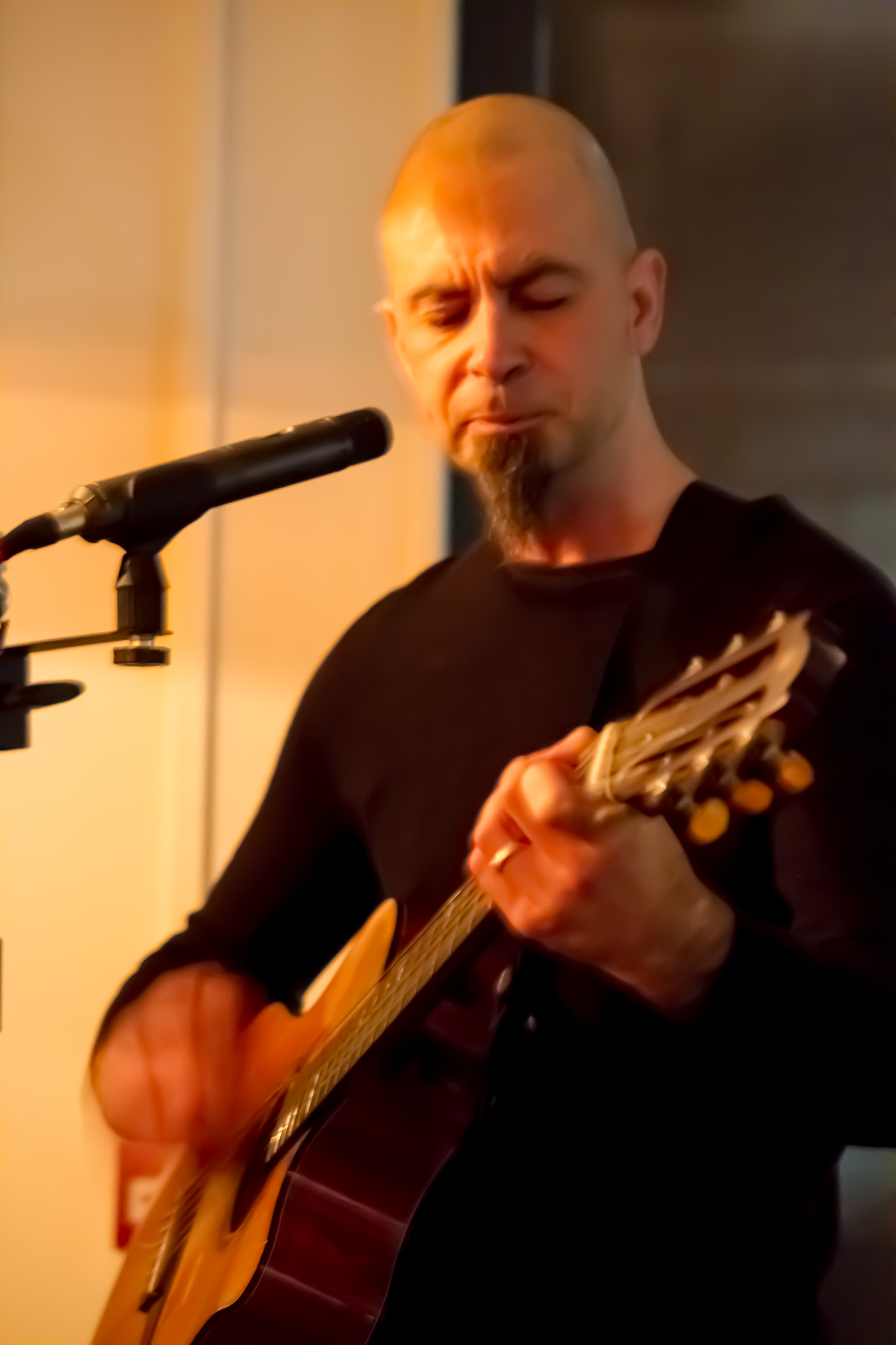 Chic setting of Cafe, Bistro, Bar & Cakery (table reservations essential for dining) receives music makeover for one night a month (first Thursday) with quartet of Keith Nickless (upright bass), Mark Drury (guitar), Kate Vassalos (guitar) ad Richard Noden (percussion) who collectively form The Hatstand Band. With a seemingly never ending set list of blues, folk, americana, bluegrass together with a variety of band guises and ever long list of musicians waiting to guest or jam with them, tonight no exception.

First delight is the addition of Stix (percussion and Sophia Vassalos (singer) who now (temporarliy) make the Hatstand Band a sextet. Always a pleasure to hear the pipes of Sophia, a blinding stroll through Memphis on that Marc Cohn song (hit for Cher) and then laidback take of the bluegrass number 'Moon Over Memphis'. Welcome listen having last heard Sophia lead her own Sophia Vassalos Band in November 2016 (The Twisted Barrel, Coventry) before Sophia & Stix joined 2017 tour as guests of rock band Ginger & The Wildhearts.

Keith normally the master of all things strings finds moment to add harmonica and spanner to instruments played before handing over to first guests Ben & Tom Jennings with their strange brew of cajun, americana and psychedelia. Ben showing his mastery at various times on violin, guitar and banjo. Tom equally adept on guitar, both treating audience to an acoustic set taken from their usual line-up parts of The Anteloids (full line-up outing on March 13th at The Drapers Bar & Kitchen in Coventry). Incidentally if looking for producers or film-maker Ben & Tom are the guys to contact as they also work as Rambling Recordings.

Initimate venue is at capacity with crowds waiting outside front door, the overspill also pouring into the rear garden. With such a large number present it was sadly difficult to fully appreciate a dynamic set from recent newcomer to Rugby, Phil Evans. His brand of finger picking and delicate singing lost amid the night's bustle. I look forward to opportunity to hear his performance in full within a quieter environment, Phil I suggest Kenilworth's Treehouse Bookshop who hold regular open mic & poetry nights where audience listen in rapt attention.

The Hatstand Band close the night with another set which includes cover of the perennial co-write by Bob Dylan and Ketch Secor 'Wagon Wheel'. With a refined menu (many of the recipes available to copy for yourselves) booking a table to dine at Three is recommended, more so if visiting during one of the First Thursday monthly live music nights with The Hatstand Band & guests, must be there date for the diary March 1st.

Although I have seen them play before, and greatly enjoyed their performances, I have not actually ever given them a full review for some reason (I ...
[1 image] END_OF_DOCUMENT_TOKEN_TO_BE_REPLACED