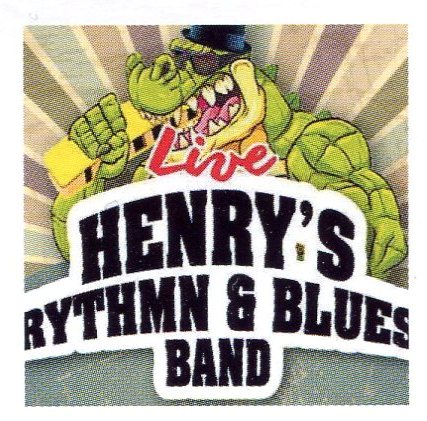 The Jolly Abbot, in the Abbotts Farm area of Rugby is a pub that is going through a renaissance and rebuilding it's reputation after a low period, with good effect. The performance space is well decorated, comfortable and airy. Not having been there for many years I was pleasantly surprised.  I arrived just as  Henry's were completing their sound check. I heard the strains of "Route 66" and "Mustang Sally" and knew immediately we were in for good night of rhythm and blues.

So it proved to be. This six piece band from all over the area (band members come from Castle Bromwich, Kenilworth, Rugby and all stations in between), have an impressive robust sound which took me back to my youth.

Dr Feelgood, Bad Company, The Beatles and some good old Rock 'n Roll from Chuck Berry all featured in their set. Elvis, Stevie Wonder all rubbed shoulders with the likes of Robert Johnson who wrote "Sweet Home Chicago" in 1936,  although similar melodies can be heard in other songs of the genre, "Honey Dripper Blues" being just one. Incidentally in this number Simon gave a particularly good guitar solo.

Annette gave a nice sax solo in Sam Cooke's "Twisting The Night Away."  and took to the mike to sing amongst others Robert Palmer's "Bad Case of Loving You." Pete Mawby played lead in "I Saw Her Standing There" which also had some good runs on bass from Dave Hayward

The band are well equipped to punch out in true "R & B" style driven by an impressive back line of Steve "Denno" Dennehy on drums and Dave Hayward on  bass guitar. Both clearly have a lot of experience as they make their efforts look so easy. Pete Mawby on rhythm guitar (with the occasional riff) is a musician who has played with the best of the Birmingham bands of the 70's and 80's. He also provides backing vocals. Lead guitar is in the thrilling hands of Simon Page. He is another who makes everything look so simple when anyone with a modicum of musical knowledge knows that to make smooth and cool riffs the way he does, is anything but. I am not surprise he is in demand, (he plays in two other bands as well). Annette Burkill comes from a musical family and is a multi-instrumentalist. She told me that whilst still at a tender age, she and her family were gigging as she played her Hammond Organ. Now she plays saxophone with the Henry's. She also provides backing vocals and takes two or three numbers as lead vocalist. The leader of the band in centre stage around which the others gather, is Dave Rogers, originally from Birmingham, but now residing Coventry. He uses all the voices on his 88 key Roland DR 300 NX piano to provide a range of entertainments including some delightful solos.

This was the gig that nearly didn't happen. Dave Rogers, lead vocalists and keyboard player was suffering with a badly sore throat and cold, but he felt he couldn't pull the gig at short notice, particularly as it was only the second time they had played at the Jolly Abbot. So not wishing to let the pub down and in the spirit of "the show must go on" persevered,  despite the pain he must have been in. That said I recognised the potential in him and would like to see the band again when he is fitter. Overall it was a good night and I would urge you to make the effort to see them when they are in your vicinity.  The gig guide will give you an idea, also their facebook page show their next few gigs.