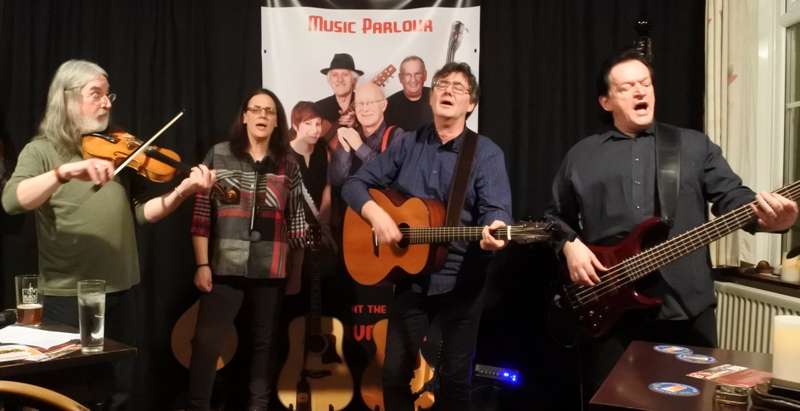 What a delight was in store for visitors to the Music Parlour on Sunday 4th February Top of the bill, was advertised as "Bisiker and Ward" Being Mick Bisiker and Nigel Ward, but 4/5ths of the Rack 'n Ruin Band turned out, so with the two aforementioned gentlemen were Chris on bass guitar and Debs on saxophone. The fact that all four of them joined in the vocal made for a very full sound.

The band started their set with three reels featuring the highly regarded Nigel Ward on fiddle, I only caught the name of one of them "Lady Anne Montgomery" but all three were "most excellent" a turn of phrase adopted if not coined by John McIntosh the "Tool" of the Willow & Tool band, our hosts for the evening. There followed a Mick Bisiker original "Ball and Chain" In fact Bisiker originals peppered the set from start to finish. There is no doubt that their performance was enhanced by the inclusion of Debs on saxophone(s) and Chris on bass guitar. Nigel Ward was given free rein to exhibit his skills on not only fiddle, but guitar and mandola too.  At one point in the proceedings, the mandola was handed to Bob Brooker who happened to be in the audience, so the band in effect became a five piece. There can be no doubt that Mick has tremendous guitar skills, some of the sequences he produced were mind boggling.

One of the songs Mick Bisiker didn't write was "Carrickfergus" which Chris on bass was accused of not liking very much. Well if he didn't enjoy it, everyone else in the room did. Alan Hull one of the founding players in Lindisfarne also made a contribution to the set in the form of "Winter Song." Closing the set was "Rose Of Allendale" This was the tune in which Bob Brooker made his addition to the band on mandola.  The whole was very enjoyable and varied from loud and raucous to quiet and thoughtful. This is a characteristic of a Rack 'n Ruin gig, I once before wrote that you were unlikely to get bored at one of their concerts as there was so much variety.

Supporting Mick & Co, were Daisybell, a trio of lovely ladies, who's close harmony singing is a wonder to all who are lucky enough to hear them. Their somewhat truncated set included Katherine Fear and Ginny White originals together with a Lennon & McCartney song which Katherine challenged us to name and then flag the album from which it was taken. Most of us knew it was "Because" but only the real aficionados could correctly identify "Abbey Road."  From one road in London to another, possibly better known (at least before the Beatles). Katherine, Ginny and Anya Fay, not only "knocked 'em in the Old Kent Road" but also KO'd the audience with their treatment and delightful harmonies in the old Cockney song.  I look forward to hearing a fuller set from these ladies using not only their voices but the increasingly diverse set of musical instruments that they use in their concerts.

Also on the bill was song writer, singer and guitarist extraordinaire, Bob Wilkinson doing a rare (for him) solo appearance. His songs are from life and a vivid imagination. For example who else might think about writing a song from an elephant's point of view. I kid you not, but this was no song that could be performed by either Dumbo or Nellie, this was a song about how we are decimating the flora and fauna of the world, it was a sobering experience recognising the truth in the song.  On a lighter note, Bob told a story about meeting his lady in Rome, each coming from a different part of the world to meet up. But confusingly the song he sang was about a couple meeting in Athens, - but perhaps it was the beer. He was joined for his last song by Amelia who delighted us with a rendition of "God Bless the Child." She has a strong but sweet voice with a penchant for the blues and more than did justice to this Billy Holiday song.

The Willow & Tool Band lacked a certain sex appeal this night as Flautist and singer Laurel McIntosh had phoned in sick. Keith Eardley was prevailed upon to undo a couple of buttons on his shirt but somehow it wasn't the same. Keith brought along his resonator ukulele and a set of harmonicas, including a miniature version bought for him by Pete Willow, whilst on a trip to USA. He had to be careful not to swallow as he gave a perfectly recognisable performance of "Oh Susannah." on the smallest musical instrument ever seen. As seems to have become tradition, everybody on the bill, and indeed some who were not, joined together in a jam version of "Pick A Bale Of Cotton" with seemingly all having an eight bar solo. It was very good night, even some of John McIntosh's stories were new.

Willow & Tool's Music Parlour is established on the first Sunday of the month at the Harvester Pub in Long Itchington near Southam Warwickshire. Next month top of the bill are MESA, this renowned Leamington group are popular wherever they go, having an almost unique line up of acoustic guitar, cajon and electric guitar. All of their songs are original too, free entry, jug collection.

The Peas at Willow and Tool's Music Parlour

At first glance Willow and Tool's Music Parlour is a typical back of the pub Folk Club.
[4 images] END_OF_DOCUMENT_TOKEN_TO_BE_REPLACED