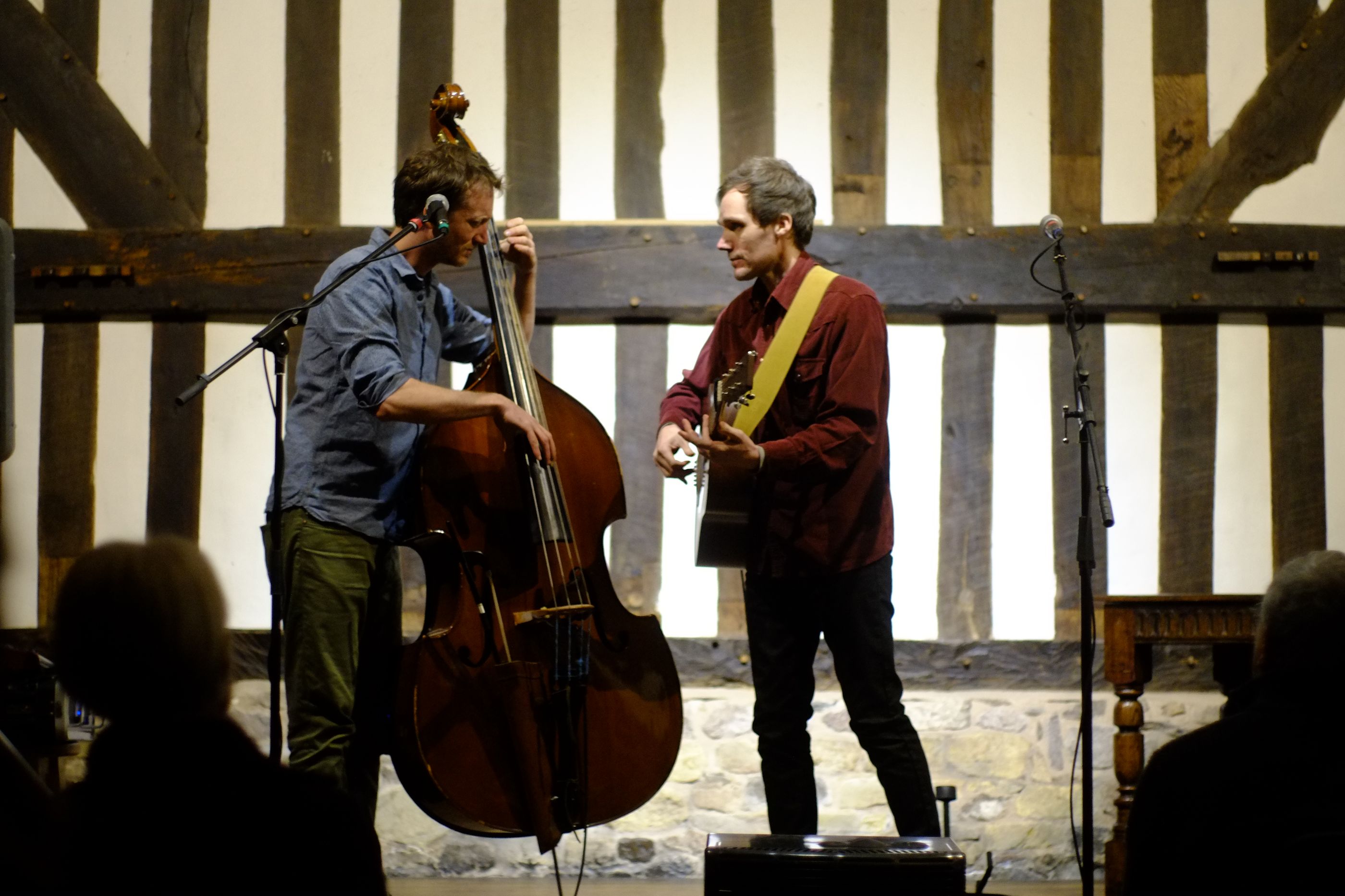 Once again slipping past the usual Hot Music Live remit boundary into neighbouring county to visit Leicester, I promise later to to reach into a couple of more local and warmer book shops that double as venues for book & poetry readings, games nights, Open Mic Nights, gigs and all manner of events. However let's settle into the city centre's rather frosty (much due to the cold night itself) Guildhall for my third viewing of Tobias Ben Jacob and Lukas Drinkwater.

Not having visited Leicester by night for a couple of years, the venue was quite easy to find. Park at the Rooftop car park, exit into the streets via the shopping precint and seek the BBC Radio Leicester studio (which makes itself ideal stopoff prior to a gig to plug oneself) and find the Guildhall just around the corner. After the show ample opportunity to linger in the numerous clubs & bars or simply take the short walk back to the car (less than 10 minutes, entrance to the car park is just before Frankie & Benny's in Highcross Lane).

Into the venue itself and doubtless with a near 700 year history the boards of the medieval building at various points stage to infinite number of actors, oraters, playwrights and musicians. Tonights duo tempering the chill which despite it's glorious heritage portrayed in a rich tapestry of words and images pervades the room. The museum turned over to host Devon & Cornwall based Jacob & Drinkwater who admit it's one of their rare journeys this far north, my earlier sightings much closer to my home in Warwickshire.

At least 2 of these occurences are shared with fellow Rugbieans sat immediately to my left - Carrie, her musician husband Keith and friends Richard and Kate. The latter two accompany Keith in trio The Hatstand Band. I should mention it's there second viewing this week of Tobias & Lukas (having caught the pairing on Monday at Birmingham's Kitchen Garden Cafe). Tap on the shoulder and no surprise as party reunited with Zarla, the last time the 6 of us together being also a gig with Jacob & Drinkwater (The Big Comfy Bookshop, it's extended site continuing to multitask as bookshop (pre-loved) & cafe hosting poetry & book readings, games nights, folk gigs and all manner of events).

Tonights show a dash from Cornwall via Exeter for duo, when Lukas had an early morning session recording with Sadie Horler. Without resorting to the limited space reserved as dance floor, audience delight at both the strength of songwriting by Tobias and the wonderfully adept musicianship of Lukas on double bass which occasionally is exchanged for guitar, instrument upon which Tobias equally deft.

Missing set list (reasoning why revealed during show) dips in and out of work by Tobias, the new album preceded by the widely radio airplayed title song of earlier EP "Burning Low", which in new guise makes it to the current album release "A Polyphonic Life". Favourite rendition is hard choice, the silky album cut with fellow musicians Lukas (pre-requisite), Phillip Henry, John Elliot, Tim Heymerdinger, Alastair Caplan and Andy Watts or stripped back as duo, live and acoustic seemingly finding new breathe on each listen.

Singling out one more song written by Tobias with 'If Any Dream Survives' taken from the album (spookily just playing on the CD as I write) receives comic introduction by Lukas, each musician in turn either comic or straight man. Tobias fall guy this time round dubs the song as part of his angling record. Good comedy requires timing, gents it'really is impeccable.

Thaw complete with songs lifted from 3 of the world's finest songwritiers, tonight's reading of Bob Dylan's 'Blind Willie McTell' surpassing the version heard on first witnessing Jacob & Drinkwater live at The Treehouse Bookshop (Kenilworth). Sadly I believe gig with Duotone currently happening at the Treehouse may be the last, Open Mic, poetry & book readings will continue. Which certainly means The Hatstand Band will play the venue again, I almost forgot it's players together with Carrie and daughter also present at the same Treehouse Jacob & Drinkwater show.

Winter tour presses on before Tobias and Lukas will temporarily go their own way, each also having successful careers either solo, as session musicians or players in other companies. Joyously picking up threads to re-assemble each year for Summer tour. Review perfectly concludes with sweet comments overheard made audience no longer first timers " delightful, had not heard of them before, well worth braving the weather".

Lukas returns to Coventry, this time supporting another musical partner – the Australian born Emily Barker, who in 2017 delivered a year's highlight in the wonderous album "Sweet Kind Of Blue". Emily also provides those gorgeous backing vocals on album version of the aforementioned 'If Any Dream Survives'. Catch Emily and Lukas on Sunday 11th February in The Big Comfy Bookshop Fargo Village.

Finding The Guildhall relatively easy when visiting Leicesster by road: Drive into the city centre heading for Highcross shopping centre. Ignore road signs for Highcross B C D, instead follow Highcross A into St Nicholas Place. On the left you should see restaurant The Fish & The Chip, immediately ahead is the pedestainised shopping centre. Oto the right Jubilee Square with BBC Radio Leicester parallel to it.

Turn left just before the shopping centre and about halfway down turn right into Highcross Street – entrance to Highcross Rooftop car park is in front of you (miss this turn and you have to join the ring road again). Exit the car park via the lifts into the covered precint and head for Jubilee Square, turn right onto Highcross street, BBC radio station will now be on your left. Walk alongside Jubilee Square to the right. Take the next left onto Guildhall Lane, the timbered Guildhall (during the daytime a noted museum) a little way up the lane on the right The Guildhall. Hint - parking at Highcross Rooftop heavily discounted after 5pm). Hope to see you there soon.