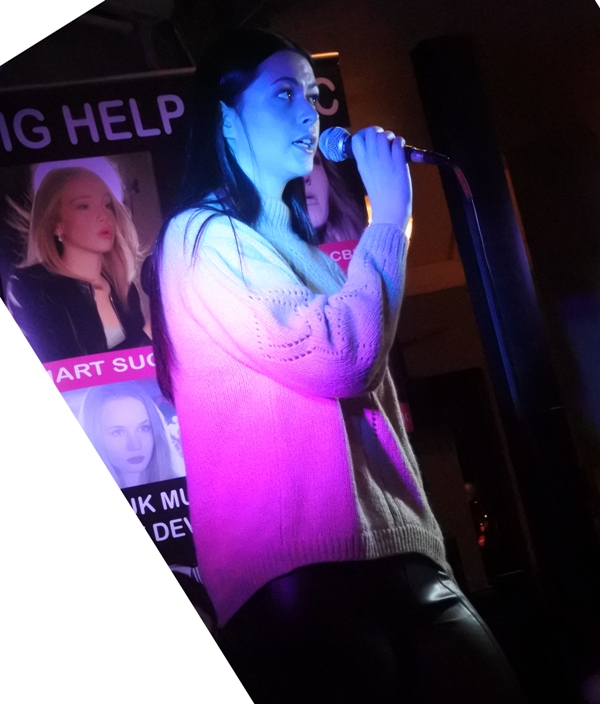 You know how it is when plan A falls apart you have to look for a plan B. This was the case for me on Friday 5th January 2018. We had intended to go to the Big Comfy Bookshop to see our friend, the incomparable Daria Kulesh. However my wife who has recently had a couple of spells in hospital was not up to it.

I was in serious withdrawal trauma from not having enjoyed any live music for about three months. Barbara decided she wanted to sit with her feet up to watch the Liverpool vs Everton match on TV, so I cast around for an alternative.

Big Help Music runs two regular "showcases," one at The Bear pub in Rugby  on the first Friday and the other at The Fusilier in Leamington on the third Friday of each month. I got to The Bear (about two miles from home) too late to catch the start of the show which features up and coming youngsters just starting their careers in the music industry.

As I arrived, Elan Marie O'Callaghan from Derby, a new name to me, was on stage. Her selection of Lana Del Rey's quiet and emotional "Video Games" may not have been the most obvious choice of material for a Friday night pub crowd. However much, I admit to my surprise, they listened and received it very well which was reflected in the applause at the end of the song. I don't know much about this young lady, but I would like to see more of her in the future, perhaps in a more intimate setting.

Saloni Boyina is a Milton Keynes based singer of Indian heritage, with which who's work I am more familiar. She writes much of her own material as well as mixing Western and Asian influences into her performances, often in the same song. Her set included for example, Sean Mendes' "Nothing Holding me back" which contains lyrics that would never have been heard from a girl of her age in my time, but hey ho!, I suppose it is almost the raison d'être of teenagers to shock the old folk.  Her own composition "Moving on" showed her interest in music both Eastern and Western. Her imagination was let loose on a mash up of Rita Ora's "I'll never let you down" and Ella Henderson's "Ghost". Saloni continues to delight with her energetic and proficient performances. Her debut EP is released on the 26th of this month. Pre-order now to help her secure a good chart position.

This particular night marked the passing of a milestone. Dutch Van Spall who has hosted these events for the last twenty years or so has handed on that particular job on to Lorna Dea for the future. She also did a couple of sets of her own, as well as acting as a backing singer when required. Talk about working the girl hard! More of this later.

A new face at these shows is Bethany Dyson from Nuneaton. She exudes confidence and has a lovely, powerful voice to match. Sadly technical issues reduced her contribution to just two songs, both of them covers, however I understand she is having a session with Big Help's Musical Director, Nicky Dawn Stewart next week and I am sure we will be hearing more from this attractive self assured young performer.

Nicky Dawn Stewart is not only voice coach, mentor, M.D., to all the youngsters and the now well known Strawhouse Singers, (in demand from internationally known singers as a backing group), but she has a fantastic voice of her own. She was first 'let off the reins' so to speak at the Big Help Christmas Concert in St Andrews Church Rugby. That show proved to be a catalyst for the hitherto suppressed desire to launch her own solo career. To that end she is releasing an EP in the summer. This will be comprised of mostly show songs rather than pop. That said, her stagecraft, musicality and sheer talent pervades anything that she performs. Her set included offerings from Belinda Carlisle, Pixie Lott, Lucy Silvas  and  shows like Dreamgirls. However the piece de la resistance was her solo of "Immortality" this was a brilliant performance. I am so glad she has taken the step to further exhibit her capacity to command the stage.

Lorna Dea is not only a photgraphic model (although she complains of being too tall), but a celebrant of all things soul. She is writing more and more of her own material. "My King", "Comfort Zone" and "Take a deep Breath" were just three of her own compositions in her two part set. Of course there has to be a Stevie Wonder song in a Lorna Dea set, this time it was "For once in my life". Lorna is quoted as having said, "you cannot be my friend if you don't like Stevie Wonder." This lovely Yorkshire lass made a good job being Compere even if she did almost miss her cue a couple of times. She coped well with a sudden running order change even while she was on stage. She will be an eminently suitable replacement for Dutch when she gets into the job. He has the experience of twenty years to lean on and this was her first night. She is funny, and quick witted, two fine attributes for the smooth running of a show.

I am sure that power ballads were written for Abz Winter. She opened with a Christina Aguilera number "Something got a hold on me" from Burlesque. She danced around the small stage area exhibiting moves that enhanced the song no end. I am sure her experience as a synchronised swimmer helped in this regard. I find I am liking Abz' performances more and more, this likeable girl has a sunny vibrant personality and emanates the confidence and stagecraft instilled in all the students at the Big Help Academy. The Zutons "Valerie" and Paloma Faith's "Upside Down" preceded a couple of humdingers. "I who have nothing" and "Bohemian Rhapsody" which closed the show, the latter with Nicky Dawn Stewart and Lorna Dea as backing singers, nearly brought down the house. The power, control and sheer quality of this young girl's voice can amaze. Long may she continue to entertain us.

When I got home I found Liverpool had beaten Everton which apparently was not good news.

Out this morning, as a fanfare-free surprise for her fans, is a new EP from the irrepressible Abz Winter entitled ‘Just Wanna Be Me'.
[1 image] END_OF_DOCUMENT_TOKEN_TO_BE_REPLACED

As I'm sure most if not all of you are aware, Abz Winter was selected for the new television talent show "Walk The Line" at the end of 2021 and ...
[1 image] END_OF_DOCUMENT_TOKEN_TO_BE_REPLACED

That irrepressible artist Abz Winter is back on 8th October with her latest single "Under Me", her follow-up to "Money" from July.
[2 images] END_OF_DOCUMENT_TOKEN_TO_BE_REPLACED

As her follow up to the popular "B.
[1 image] END_OF_DOCUMENT_TOKEN_TO_BE_REPLACED

Abz Winter has only gone and done it again hasn't she? I love the way that although her game has never needed raising (it's been at the top ...
[2 images] END_OF_DOCUMENT_TOKEN_TO_BE_REPLACED

It's actually been a year since we shared the news about "Jump" by Abz Winter with you, a period of time between releases which would have ...
[1 image] END_OF_DOCUMENT_TOKEN_TO_BE_REPLACED

The first of the autumn 2017 series of the Big Help Music showcases at the Bear Pub in Rugby was held on September 1st.
[6 images] END_OF_DOCUMENT_TOKEN_TO_BE_REPLACED

Big Help Showcase at the Bear

Big Help Music showcase at the Bear 13th January 2017Rather later in the month than usual, the first BHM showcase was held at the Bear, in Bilton, ...
[6 images] END_OF_DOCUMENT_TOKEN_TO_BE_REPLACED