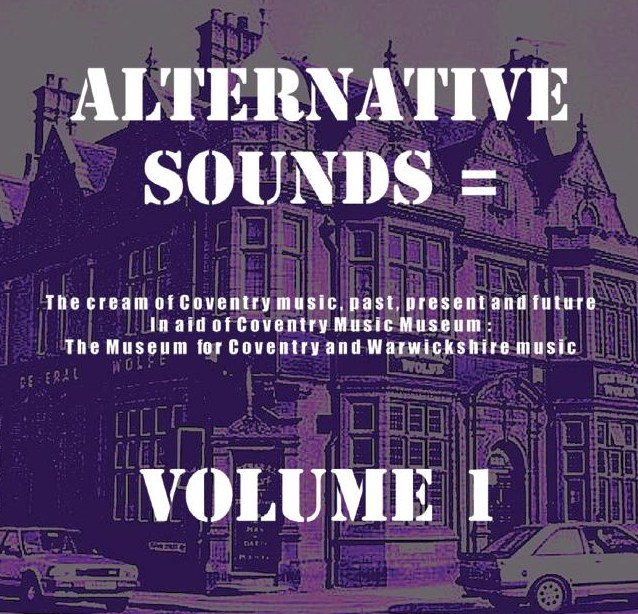 Readers  of "Hot Music Live" will recollect my previous article (September 21st )  on the launch of the "Alternative Sounds EP", a 7" vinyl release (on the Coventry Music Museum's label) which acted as a taster for a projected series of full albums of "Alternative Sounds", featuring "the cream of Coventry & Warwickshire music, past, present & future" and also my November 18th article saying a little bit in advance of its release about the first album itself.

The latter I am pleased to say is now available in a limited edition with a 16 page booklet, emulating the original "Alternative Sounds" fanzine of the project mastermind & compilation producer, Martin Bowes. This booklet tells those unfamiliar with the artists what they need to know & steers them towards further exploration of their work. In fact, I have not found anyone (project team members included) who knew every act previously, let alone had heard every track, most of which are rare or unreleased.

Put together in Martin's Coventry studio "The Cage", the collection spans the period 1601-2017 in our local music (the surprisingly early start date is courtesy of Wes Finch & the Rude Mechanicals having set a song by Stratford born lyricist William Shakespeare to music).

Local music lovers will know well some of current scorching hot acts on the record who play gigs currently in our area & further afield: for example  the afore mentioned Rude Mechanicals, Satsangi, Crokodile Tears, Huffy, Izzie Derry, Fall Girl & Prole Position, and who have featured also on local radio such as BBC Coventry & Warwickshire's Introducing show & who represent the present & future of our music. Martin's own band ATTRITION are also represented & as with so many aspects of their identity, fall into a category of their own: a global cult status, genre-creation, a more than three decade  long career & an international touring schedule.

Names such as Roddy "Radiation" Byers, the Primitives or Lieutenant Pigeon will need little introduction given their many international hits, but not everyone will have heard the tracks they have kindly allowed the project to use.

Cult bands, some of which play occasionally still, but many of which split without the success that so many people predicted for them, are represented by bands such as the Shapes, the Ak Band, the Giraffes, the Reluctant Stereotypes, Gods Toys, Skeet, Human Cabbages, the Furious Apples & Filthy Cake: the team hope that those who missed these bands pick up on the excellence & originality of their music & get a sense of why they were so popular & why they retain devoted followings.

As previously noted, the album is dedicated to Steve Edgson, (10th June 1955 to 7th January 2009), a member of Analog, ENS, the Reluctant Stereotypes, the Pink Umbrellas, Crocodile Tears, the Giraffes & Two Giraffes: one of our area's most respected, creative, original & loved musicians.

Big credit too to Johnny Satsangi (of Satsangi) for his brilliant cover artwork & Dean Eastment for designing the rest of the packaging & booklet.

The Team are currently working with a great deal of enthusiasm on "Volume Two" for a 2018 release.

"Alternative Sounds: Volume One" can be bought at Seismic Sounds in Leamington, the Leamington Record Store, Coventry Music Museum & via Bandcamp.

This is perhaps, an excellent opportunity to say something about the closure of HEAD in Leamington: great supporters of the project & a favourite shop of all the team. The writer was within a few hours of delivering copies of the album to them for sale when he received the news. The shop & its excellent staff will be sorely missed, not just by Leamington music fans but the many customers who came from much further afield.

I reviewed (back in November) the most recent single from Satsangi, "World Falling Down" and mentioned a little bit at that time about their ...
[1 image] END_OF_DOCUMENT_TOKEN_TO_BE_REPLACED

Fresh out from Satsangi is "World Falling Down", (their first since they raided their own vaults for the "Don't Want Anything But More" single ...
[1 image] END_OF_DOCUMENT_TOKEN_TO_BE_REPLACED

During these turgid times when there is a distinct danger of every successive day seeming like its predecessor, it's helpful to be surprised now ...
[1 image] END_OF_DOCUMENT_TOKEN_TO_BE_REPLACED

Satsangi, never a band to shirk a challenge nor to be meekly led by fate nor wander aimlessly down roads many others have trodden previously, seem to ...
[1 image] END_OF_DOCUMENT_TOKEN_TO_BE_REPLACED

Well life under lockdown continues to evolve doesn't it: even, or perhaps especially, our musical life.
[1 image] END_OF_DOCUMENT_TOKEN_TO_BE_REPLACED

Some excellent news for lovers of music which dares to be a bit different.
[1 image] END_OF_DOCUMENT_TOKEN_TO_BE_REPLACED