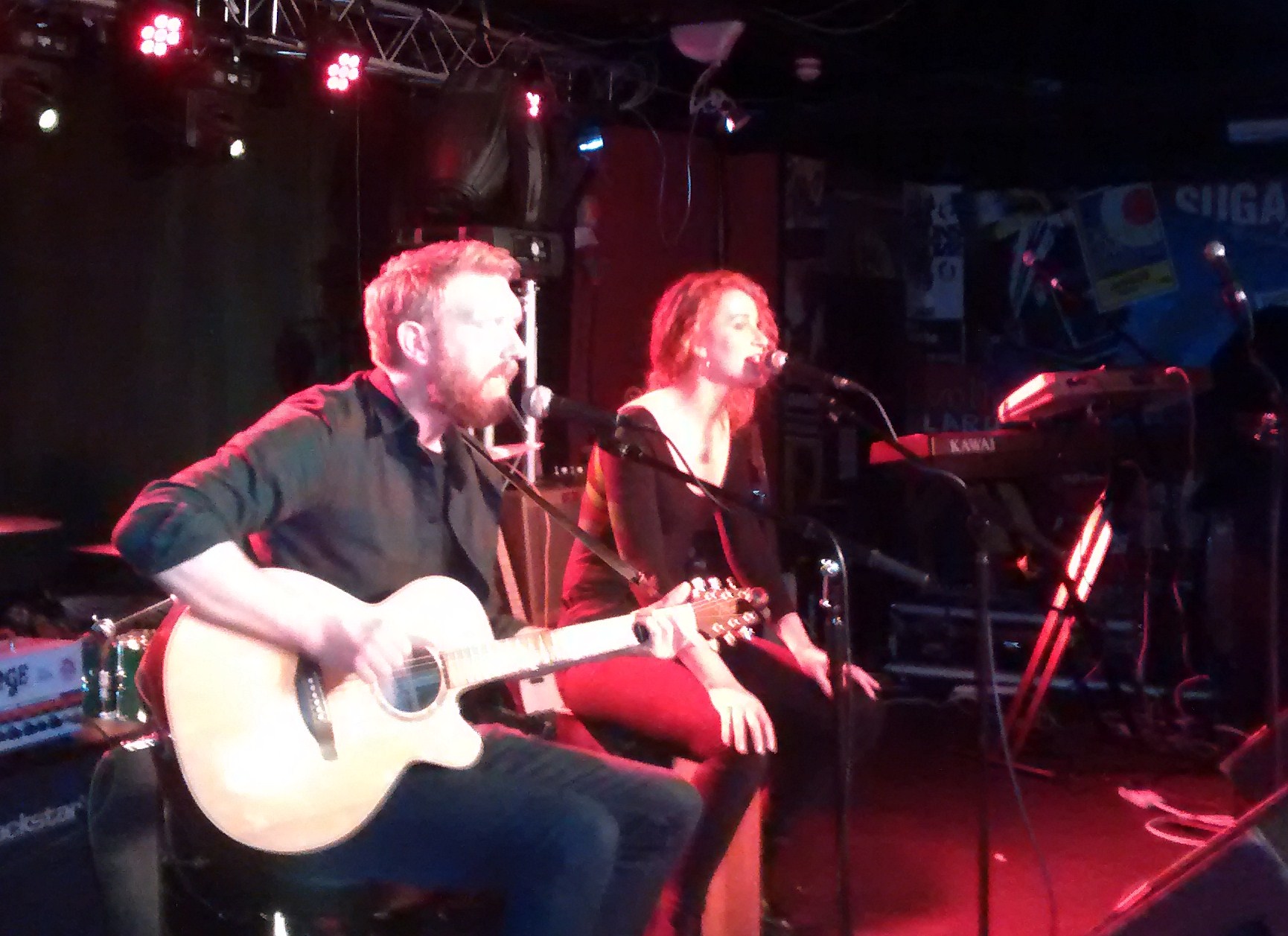 There can be no better value for money gigs locally than the ones Ape Promotions put on at the Zephyr Lounge. Always featuring at least five acts and each of those interesting, unusual & inspiring, this year's "Wrongmas 2" event was up to the highest standards of this tradition.

Having been an avid follower of these nights, several of the groups were already known to me, but as ever with Ape mainman Johnny Satsangi, he added one to the bill whom I'd not seen before: and it is this introduction to new acts which keeps my interest up and is a key ingredient to the formula and which makes Ape such a vital part of the reinvigoration of the local scene.

The band I had not before seen nor heard was the first one up: Clemency, featuring Ben Clempson (who would later reappear onstage as bassplayer/vocalist with headliners Satsangi) on acoustic guitar & vocals & Nina Bailey on vocals & cajon. As with the characteristically eclectic nature of Ape gigs (I did say to several people as the night progressed that I could not see how I could avoid use of the word "eclectic" in this review), Clemency offered an approach I'd not seen before at one of these & greatly contrasting (in a very positive way) with the other acts. The style was very traditional folk in nature (the material, as far as I could tell, was all original) and such a simple set up in such a venue was potentially a challenge: however such was the skill & dynamic of the performance, this never was a problem. The playing was superb & assured (possibly the most bassy cajon sound I've ever heard) & the singing ever better. The songs were structured around well thought out male/female harmonies and Nina's voice was a revelation: powerful yet expressive with very impressive Sandy Denny echoes. I have no idea what ambitions this duo may have, but I would have thought that there is considerable potential for them in the folk world. I did afterwards express my desire to Ben that they record this stuff asap.

Next up were the party favourites Grassroutes. Any readers who have seen this band will know just what they bring to the gigs they play. A total commitment to their performance (which at times verges on a whirlwind with colliding members & spilled beverages flying) and a musical skill and taste which can sometimes be obscured by the exuberance. Tonight, they started with a perhaps more grooved & slowly building set than some I've seen from them, which helped them move to the usual frantic climax of crowd favourites such as "Have a Tequila", "Gangaman" and "My Old Man". There are a lot of very pedestrian ska tribute bands out there, but if you are looking for a band who have taken the spirit & style of ska & kept it fresh, look no further than Grassroutes.

And so to headliners Satsangi. This is another instance of where covering our best local bands (and my favourite ones) for "Hot Music Live" so frequently causes me problems of trying to find new ways of expressing my thoughts. Certainly one of the most original & stunning bands on the local scene, these musicians do deserve the widest recognition & audience. Genre defying and boundary pushing they are also such an exciting live act. They can't even manage to fit all the facets of their act into one set : beforehand I asked singer Su Menon  whether they'd be playing "Here Comes the Night": a track Brody Swain has been playing repeatedly on the BBC and which is a Su tour de force: unfortunately it is still awaiting its live debut. It's not just Brody & the BBC who have identified Satsangi as the band to watch: in the audience tonight was legendary producer John Rivers with whom the band has been working & recently the band's "Sixty-four Seven" track was added to the collection of the British Library as part of the "audio & cultural history of the nation". The set itself was a melange of style & styles with all the virtuoso members so confident of their roles in creating driving, shifting, compelling numbers which had the predictable impact on the audience (though I would say I felt sorry for the sound mixer: the variety of instruments etc must present challenges & tweaks were noticeable throughout). The only criticism: a usual one. The set could have gone on & on as far as I was concerned.

Dissident Noize Factory was a band I was introduced to at a previous Ape promotion & another reason I applaud Johnny for bringing such left field acts to our ears. Another fascinating group with unusual instrumentation (violin, trumpet, trombone, loud hailer etc) in addition to guitar, bass & drums. I may have described them previously as demonstrating a sort of gypsy punk approach, something I would repeat on this occasion, though I may not have suggested a dub element (comparisons with the violin-featuring "War Crimes" by the Special AKA struck me tonight). Again, I don't know what their ambitions are, and this band certainly operate beyond the mainstream, but if you get the chance, their compelling stage act & interesting material is well worth catching if you can.

The same advice might of course be extended to the whole Ape phenomenon: if you missed Wrongmas 2, then you missed a treat. I didn't, and of that I am grateful.

I reviewed (back in November) the most recent single from Satsangi, "World Falling Down" and mentioned a little bit at that time about their ...
[1 image] END_OF_DOCUMENT_TOKEN_TO_BE_REPLACED

Fresh out from Satsangi is "World Falling Down", (their first since they raided their own vaults for the "Don't Want Anything But More" single ...
[1 image] END_OF_DOCUMENT_TOKEN_TO_BE_REPLACED

During these turgid times when there is a distinct danger of every successive day seeming like its predecessor, it's helpful to be surprised now ...
[1 image] END_OF_DOCUMENT_TOKEN_TO_BE_REPLACED

Satsangi, never a band to shirk a challenge nor to be meekly led by fate nor wander aimlessly down roads many others have trodden previously, seem to ...
[1 image] END_OF_DOCUMENT_TOKEN_TO_BE_REPLACED

Well life under lockdown continues to evolve doesn't it: even, or perhaps especially, our musical life.
[1 image] END_OF_DOCUMENT_TOKEN_TO_BE_REPLACED

Some excellent news for lovers of music which dares to be a bit different.
[1 image] END_OF_DOCUMENT_TOKEN_TO_BE_REPLACED

I have often written about the wonderful, in fact the weird, thought provoking & wonderful evenings Johnny Satsangi puts on at the Zephyr Lounge ...
[1 image] END_OF_DOCUMENT_TOKEN_TO_BE_REPLACED