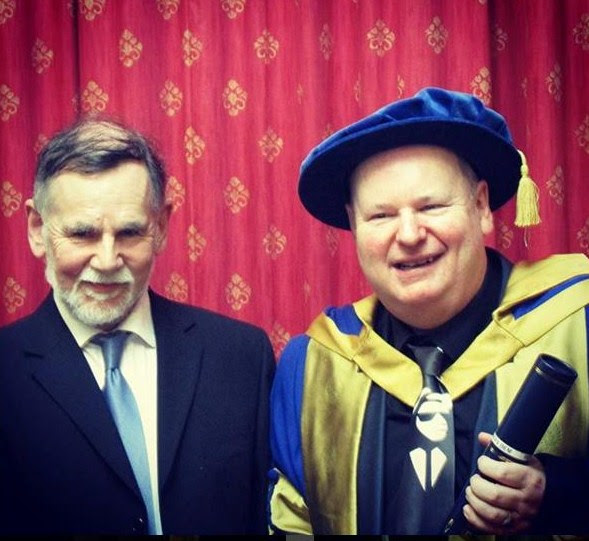 The practice of universities awarding honorary qualifications often seems to result in the famous, rich, powerful & previously honoured getting additional honours from institutions based in areas they have no obvious direct connection with. Doubtless these transactions are of mutual benefit.

Not so Coventry University, which has a distinguished record of honouring those who have made significant contributions to the local community & frequently those overlooked (often scandalously) previously. Thus figures such as Jerry Dammers & Pauline Black have been awarded distinctions as has Coventry music inspiration & legend Ray King (Vibert Cornwall) and on Monday 20th November 2017, Delia Derbyshire (sadly posthumously) and Pete Chambers received Honorary Doctorates at a Degree Congregation at Coventry Cathedral.

Delia, who died in 2001, received her award  "in recognition of her longstanding contribution to the field of electronic music". It is difficult to imagine any other individual from our area who has had such a profound and wide influence on contemporary music & after the Two Tone exhibits, the area in Coventry Music Museum dedicated to her is the second most cited specific reason for visiting by its visitors. Best known for creating the sounds of "Dr Who", both the theme & incidental music & Tardis/Dalek sounds with her colleagues such as Dick Mills at the BBC's Radiophonic Workshop, Delia also crafted a wide range of work for television & film & later on with musicians such as White Noise & Sonic Boom: much of the vocabulary of modern electronic music has its roots with her. Most people who understand her work are outraged by the lack of credit & recognition in her lifetime, so the celebration of her 80th birthday (or what should have been) this May, at which fans such as Jerry Dammers performed at Coventry Cathedral & the Music Museum, the naming of "Derbyshire Way" in the city for her, a blue plaque ion her childhood home (unveiled by Colin Baker & Nicola Bryant) plus this award by the University go some way towards a belated act of justice. It was great to see Delia's partner Clive Blackburn (pictured here with Pete Chambers) collect the award on her behalf.

Pete received his Honorary Doctorate "in recognition of his significant contribution to the musical heritage of Coventry" and like Delia, was the subject of an eloquent eulogy before the presentation, detailing his contributions as a journalist with so many publications, the foremost local music historian & above all for both celebrating the local musical heritage by conceiving & creating a museum for the music of Coventry & Warwickshire and for his long commitment to supporting & fostering emerging talent to add to that heritage.

Much of this story was unpicked later  in much finer detail at a special "Sounding Off" event at Coventry Music Museum after the degree ceremony. On this occasion, Pete, who has so often been the one asking the questions at such events, was himself quizzed by the BBC's Brody Swain, who along with such figures as Stuart Linnell, Ray King & Coventry Lord Mayor Tony Skipper had attended the earlier ceremony to celebrate their friend's award. Pete also signed the Coventry & Warwickshire Music Door of Fame.

Entertainment at this event was kindly provided by some special verse from the Museum's Poet in Residence, the Archbishop Nick Knibb and a performance from Crokodile Tears' Chris Sidwell who had broken his holiday in North Wales especially to honour Pete.

I am obliged as ever to Heather Kincaid at the Belgrade Theatre for her heads-up on a new music centred production.
[4 images] END_OF_DOCUMENT_TOKEN_TO_BE_REPLACED

Friday 5th May 2017 would, in a perfect world, have been the day Delia Derbyshire celebrated her birthday.
[1 image] END_OF_DOCUMENT_TOKEN_TO_BE_REPLACED

After a campaign led by Pete Chambers BEM, Director of The Coventry Music Museum & top Coventry and Warwickshire music historian, a new road is to ...
[1 image] END_OF_DOCUMENT_TOKEN_TO_BE_REPLACED

I'm delighted to bring you a heads-up on a rather special musical event which I'll be reviewing for the magazine next month.
[1 image] END_OF_DOCUMENT_TOKEN_TO_BE_REPLACED

In my recent review of the "Women Pioneers" event at Coventry Cathedral, I drew your attention to its companion event centring on the 2 Tone ...
[7 images] END_OF_DOCUMENT_TOKEN_TO_BE_REPLACED