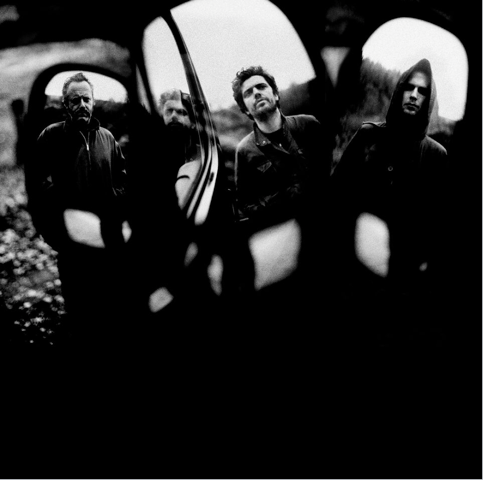 "The Cut is yet another solid release from Tenebrous Liar that cements their position in the current crop of experimental bands" - Louder Than War, 8/10

After a five year recording hiatus - TENEBROUS LIAR - are pleased to announce their new album: 'The Cut'.

The eighth full length album release from the musical moniker of esteemed rock photographer and visual artist Steve Gullick, 'The Cut', will receive its universal release on 15th December 2017 via the Straight Lines Are Fine label (available on CD, vinyl, and digitally).

Giving you the first taster of the forthcoming record, Tenebrous Liar have also released clattering current single 'Alienation', which you can listen to here.

Gullick, the nucleus and mastermind of the project, as ever, began writing and recording the album in late 2016 during a series of sessions held between the Coventry Rehearsal Rooms and at home.

Whilst Tenebrous Liar originated as a project that sourced its creativity from a transient and ephemeral line up of musicians and collaborators over the years, since 2012's 'End of the Road', the line-up has been gradually refined and cemented to a nucleus that sees Gullick collaborate with the talents of Brendan Casey on bass and Ben Edgar on drums. Now long term members, the pair accompany his distinct haunting vocal style and ragged guitar wanderings on this latest release.

Driven by the notion to create more loosely structured and freer sounding pieces based upon a largely improvised recording style, the trio acted to bring this latest sonic envisioning to life. With ambitions of channelling psychedelic era Miles Davis, early PIL and Neil Young's 'Dead Man' recordings, the result is 'The Cut' - 11 tracks of disorientating Lo-Fi soundscapes lost in a haze of atonal, discordant post-rock signatures and ambient, adrift piano motifs.

Not for the fainthearted, 'The Cut' is music designed to provoke a response. Incorporating songs dealing with global political frustrations ('Alienation') to nightmarish states of isolation ('Lowland'). Hollowed-out piano ballads such as 'Words' and title-track 'The Cut', offset the monstrous eruptions of barbed noise that ripple through the likes of 'Belong' and 'This Ground'. From the warped and strangulated soulfulness of 'Stop Believing', to the loneliness to be found in the love song, 'Forever', 'The Cut' makes for nuanced and textured listen that is as equally soul searching and explorational, as it is bone chilling and harrowing.

Speaking about the recording process of 'The Cut', Gullick states:
"Making 'The Cut' was a completely new approach for us, we hadn't all been in the same room for a while and as soon as we started playing again everything just clicked back together, there were no rules, without the boundaries of a song and not knowing which way the music would twist and turn quickly became a really natural thing for Brendan, Ben & myself to do. We recorded so much material in those sessions, most of which we only ever played once. After each session, I'd take the recordings away and embellish them at home, we're still listening through some of the recordings that didn't make it onto the album now."

Ahead of the release, Tenebrous Liar will be previewing their latest material with a special one-off headline performance at the abandoned former offices of the Coventry Evening Telegraph, Coventry on 2nd December 2017.  The night will see a selection of Gullick's own photographs that feature within the artwork for 'The Cut' exhibited on the walls as part of the event. An innovative art installation comprising projections of still shots combined with moving images will also feature as part of this unmissable performance. Support comes from krautrock stoner rock outfit, Black Helium, who will perform their Coventry debut on the night, plus one of the city's finest new attractions: Fütumche.

Tickets priced at £5.50 and are available here

Further dates are to be announced in due course.

Tenebrous Liar is the alias of acclaimed rock photographer Steve Gullick. Scratching a long felt musical itch, Gullick founded the project in 2005 and following a purge of frantic, genre-bending experimentations, he released his debut album 'Tenebrous' the following year on Fire records.

Recognising he required the assistance of a full band to express his visions on the live stage, Gullick soon began to enlist an eclectic & ever evolving line-up of friends for his subsequent outings as Tenebrous Liar. Creating a further five albums under the moniker in as many years, the project has also seen Gullick perform with a diverse selection of artists since its genesis, including: Scout Niblett, Josh T. Pearson, Nick Cave & the Bad Seeds, Foo Fighters, Duke Garwood, Oxbow, Soulsavers, Bonnie 'Prince' Billy, Ed Harcourt & Cindytalk.

After a 5 year studio hiatus, Tenebrous Liar return in 2017 with 8th LP 'The Cut', to be released on the Straight Lines Are Fine label.

Tenebrous Liar at The Tin

If anyone remembers my article of July 10th in which I looked forward to the Belgrade Theatre's takeover of the former "Coventry Evening ...
[4 images] END_OF_DOCUMENT_TOKEN_TO_BE_REPLACED

A couple of weeks ago, I was mourning the loss of the former "Coventry Evening Telegraph" building as a venue (though looking forwards to the ...
[2 images] END_OF_DOCUMENT_TOKEN_TO_BE_REPLACED