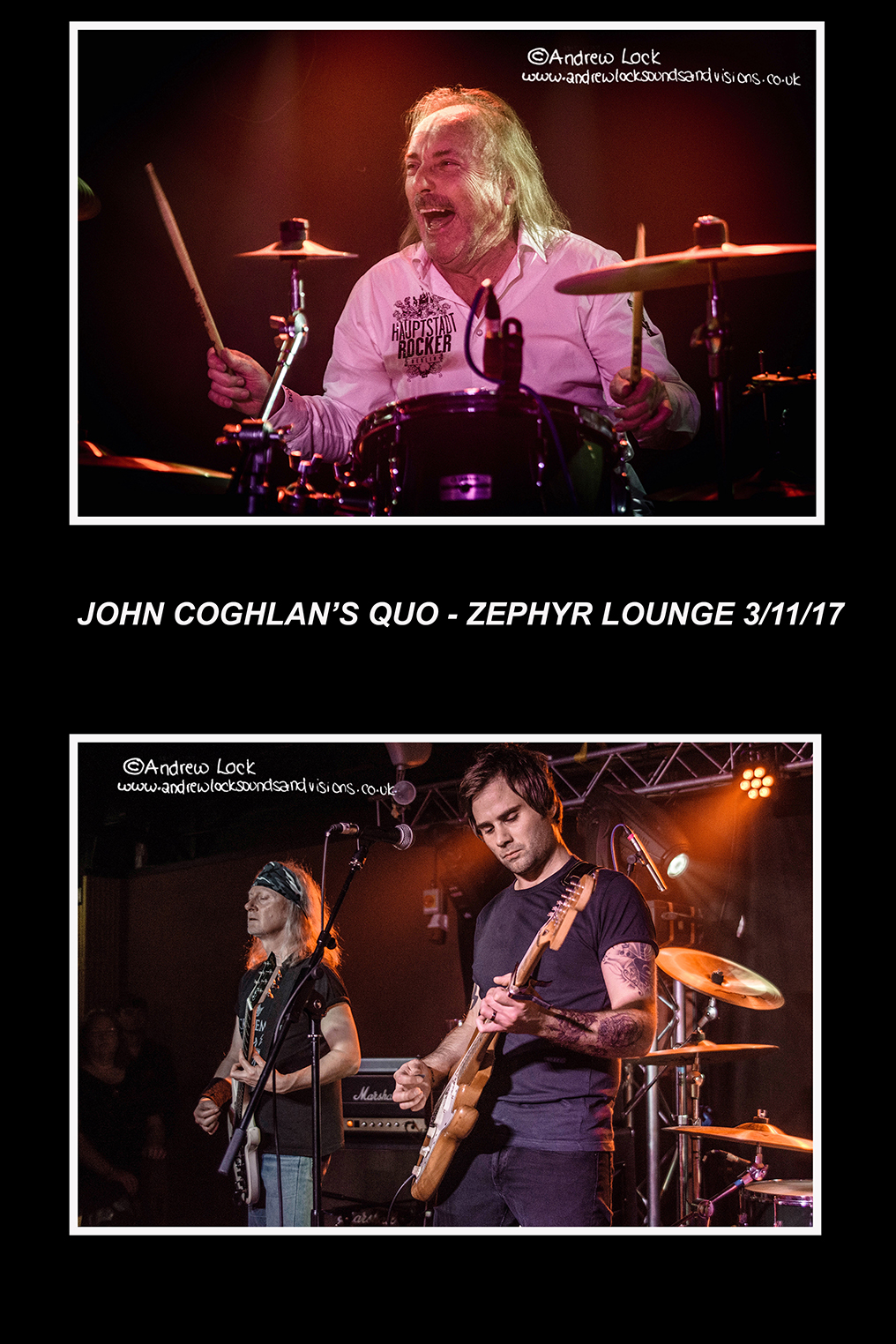 For me one of my most memorable nights at the venue for several reasons, it brought back memories of my regular visits to see Quo in action at the N.E.C in Birmingham in the 80's and 90's (unfortunately without John in the band), the band were on fire, it was a cracking set list heavy with the big hitters but also with a sprinkling of pleasant surprises and the lighting was the best I have seen at the venue (as a photographer a massive thumbs up from me for the latter).
As I wanted to get a prime position to get a few shots I queued up outside the venue about 3/4 of an hour before doors and caught the end of the soundcheck and they sounded fab and amongst the expected such as a run through ‘Something ‘Bout You Baby I Like' I was surprised and delighted to hear the main riff from Sabbaths ‘Symptom Of The Universe' and part of the intro to the same bands ‘Black Sabbath' both played to perfection I may add.
On the photography side as well the band was set up perfectly with Mr. Coghlan centre stage flanked by the rest of the band to the left and right giving an unobstructed view of this amazing drummer in action amazing hi hat work and all.
The show was split into two sets with more of the surprises in the first half and after an atmospheric drone like intro which had a few Quo guitar sounds and various sound effects imbedded it was back to that historic Quo Live album from 1977 with ‘Junior's Wailing' followed by the first surprise of the evening a frantic ‘Rockers Rollin' before going back to that early live classic album for a groove packed ‘In My Chair'.
John has got a top notch band together, Rick has the vocals and charm of an early Francis Rossi off pat with cracking guitar work to match and works in perfect tandem with his guitar partner Mick and what a rhythm engine room with the pumping bass of Rick (takes a good share of lead vocals to boot) and drum magic of John keeping the boogie on track throughout.
Other first set surprise treats included ‘(April), Spring Summer and Wednesdays' going way back to the Ma Kelly's Greasy Spoon album, a wonderfully flowing ‘Claudie' (one of my favourites) and a top quality performance of one of Piledrivers quieter moments ‘A Year' while the rest of set one was business as usual with the heads down boogie of ‘Break The Rules' and ‘Something ‘Bout You Baby I like'.
Apart from the psychedelia of ‘Pictures Of Matchstick Men' and another of the gentler numbers from Piledriver ‘All The Reasons' set 2 was pretty much the straight on, head banging Quo we all know and love with ‘Back Water' a showpiece for John's powerhouse drum work, a wonderfully chugging ‘Roll Over Lay Down', the frantic threesome of ‘Paper Plane', ‘Big Fat Mama' and ‘Rain' (the latter dedicated to the much missed Rick Parfitt) and to end the set the crowd bouncing as one for a mighty ‘Hold You Back'.
Encore time and what a choice, one of the bands greatest rockers and a No.1 single back in 1975 to boot ‘Down Down' and the audience responded in suitable fashion.
Apart from the music John told a few stories from his days as part of the frantic four and throughout the set it was lovely to see from his facial expressions how much he enjoys performing with this band he has put together to celebrate one of the UK's best and most durable rock bands and they do so in some style.

Status Quo are high up on my most attended gig list with at least 6 shows over the years dating back to 1982 and all at the Birmingham NEC and that ...
[0 images] END_OF_DOCUMENT_TOKEN_TO_BE_REPLACED

I have often written about the wonderful, in fact the weird, thought provoking & wonderful evenings Johnny Satsangi puts on at the Zephyr Lounge ...
[1 image] END_OF_DOCUMENT_TOKEN_TO_BE_REPLACED