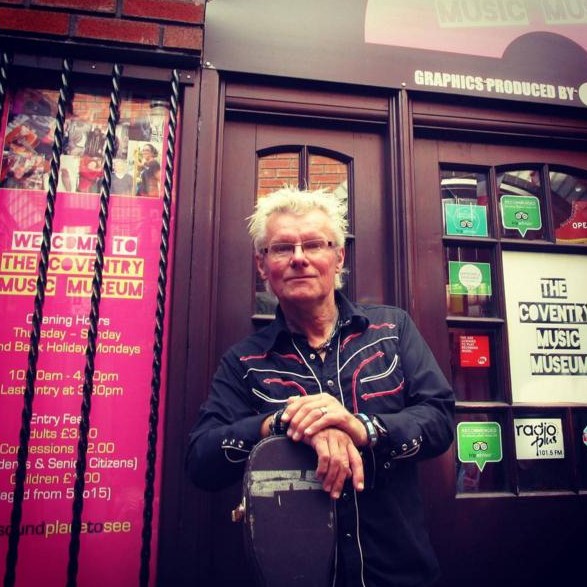 It is not easy to think of a musician who has graced so many bands of such quality & influence & featuring such diverse styles over 40 odd years as Dave Pepper (I would cite Robin Hill as maybe the closest contender). No wonder Dave was invited to Coventry Music Museum on Saturday 14th October 2017 to talk of his experiences to Pete Chambers for a Heritage Lottery funded "Sounding Off" session.

Dave initially took us from his childhood influences through school bands to an apprenticeship in legendary club band Calvary. Few of those present would have guessed how important Grand Funk Railroad were in his developing playing.

Once he had graduated from the covers world, a teenage Dave joined the well known punk era X Certs as a founder member & thence on through an almost bewildering sequence including Dexy's style soul (Team 23), the iconic "I" with Dill from Gods Toys (who very nearly secured a big deal), the baroque music of the Courtiers of Fashion with Tracey Skarzynska, the Ramrods/Major Five with Danny Cunningham & his brother Barney and of course under the direct influence & support of Tony James (of Generation X & Sigue Sigue Sputnik), probably Dave's best known band,  Blitzkrieg Zone 2020. Quite apart from the many musicians Dave worked with locally (many of whom were present: indeed it was one of the most packed "Soundings Off" ever), other names cropped up in his tale as influences, colleagues, friends & tour associates: Marillion, The Pogues, Haircut 100, Bauhaus, The Jam, Balaam & the Angel etc etc. We also must not overlook the years he spent in the USA, playing, touring, learning and including a very successful career playing the vineyard circuit of Virginia.

Pete did raise the issue of why all the stylistic changes, which Dave amiably shrugged off as "short attention span", but I think what came across was his endless love of music & urge to learn and move on: throughout the talk, almost unconsciously, as no-one actually raised the issue, he described and demonstrated how new musical directions shaped his playing techniques: and let's not forget, guitar virtuoso as he is, that Dave was headhunted for several of his bands as a keyboard player.

The final parts of the talk were questions & answers from the audience (which local musician would Dave most like to have worked with or indeed work with? Answer: Roddy Byers) and a performance, in which he captivated those present with three songs: the old X Certs number "Velvet Suits" (written by Graham Smith), his own USA era "Ain't Gotta Be Rich" and finally a wonderful flamenco piece of his own composition, created for his vineyard gigs.

You can view the whole session on video at the Coventry Music Museum's Facebook group page https://www.facebook.com/groups/Covmusic/

Following the raunch of his most recent release from earlier in the month, "Rub Rub Grind", Dave Pepper is back with his new single "Don't Stop.
[1 image] END_OF_DOCUMENT_TOKEN_TO_BE_REPLACED

I got pretty excited in these pages recently as Dave Pepper turned the clock right back on his sound with that excellent song "I Need More Time": ...
[1 image] END_OF_DOCUMENT_TOKEN_TO_BE_REPLACED

Out today from Dave Pepper is a new song called "I Need More Time" .
[1 image] END_OF_DOCUMENT_TOKEN_TO_BE_REPLACED

The latest release from Dave Pepper is called "The Calm" and is now available for you too to enjoy via this link: https://davepepper1.
[1 image] END_OF_DOCUMENT_TOKEN_TO_BE_REPLACED

As usual, starting a Dave Pepper review with a list of his musical projects & genres mastered would in itself make an article too long to hold your ...
[1 image] END_OF_DOCUMENT_TOKEN_TO_BE_REPLACED

Given the overwhelming feeling of claustrophobia engendered by the current situation, it is a corrective to share evidence that we are not all hemmed ...
[1 image] END_OF_DOCUMENT_TOKEN_TO_BE_REPLACED

Most readers of this piece will know of Joe Meek & his revolutionary production techniques, but fewer will be aware of his work with one of the top ...
[1 image] END_OF_DOCUMENT_TOKEN_TO_BE_REPLACED