Stone Bear at the Townhouse 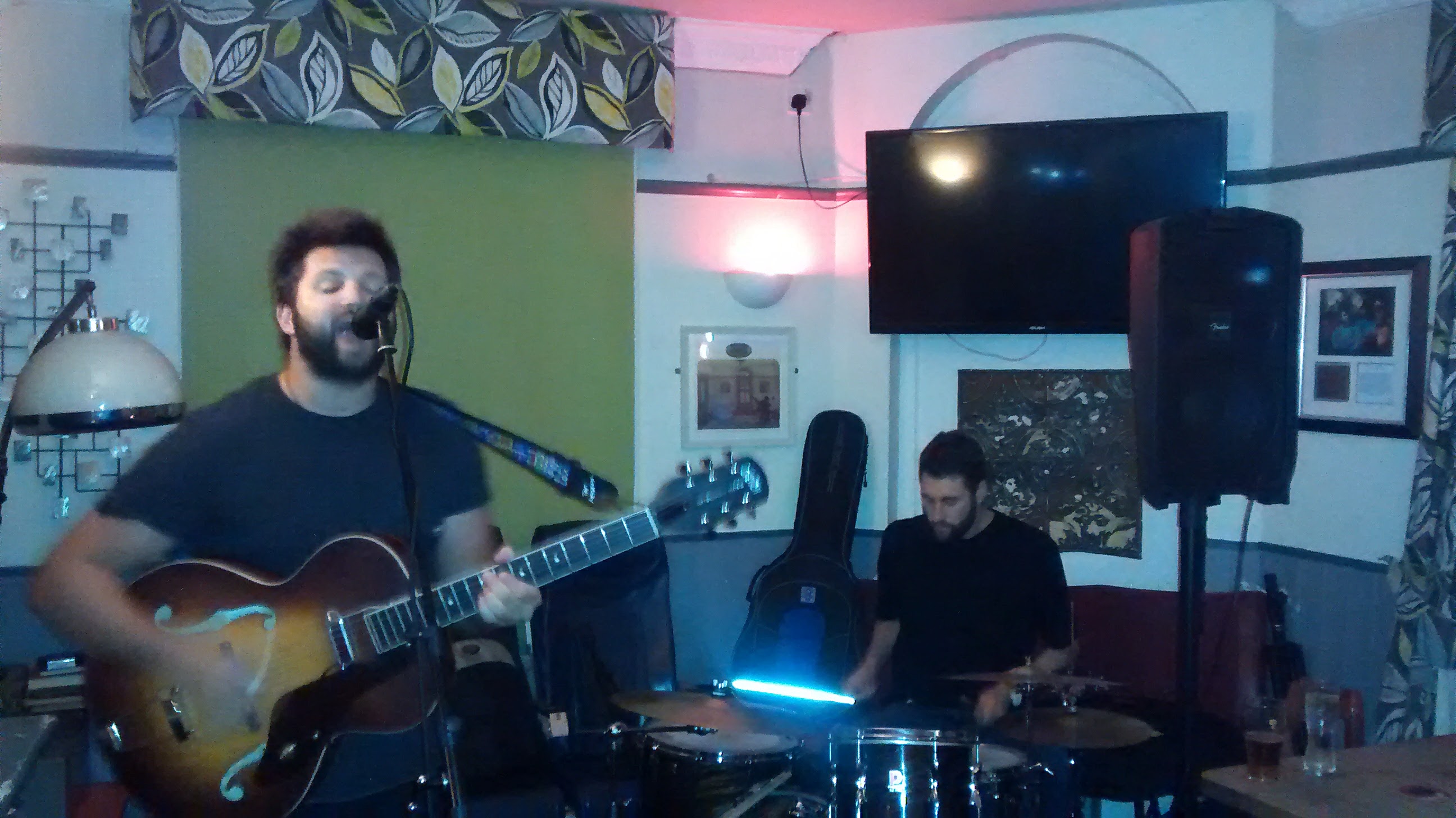 I asked Sam about the identity of the enigmatic "friends" & received some information & last week saw Anthony who not only gave me more details but enthused greatly over these friends, very much recommending to me that I saw them asap. When the former bass player of the Style Council, a man who has played with Badfinger, Hazel O'Connor, Lee "Scratch" Perry, the Primitives, many members of the Specials & Selecter etc etc recommends a band, you do tend to take it rather seriously. It turns out that the true identity of the "friends" is local band Stone Bear, with whom Anthony has been recording & big favourites of Brody Swain & Hannah Tobin at BBC Coventry & Warwickshire Introducing.

I have kept an eye out for a gig of theirs and luckily they were playing Tunehouse at the Townhouse, following in the footsteps of some excellent bands I've caught recently there such as the Folly Brothers, South Town, Retroville & the Doc Brown Trio.

They are a two piece (drums and guitar/vocals or to give them their actual names, Jeff Dennis and
David John respectively) and given their description of a blues orientated band, I was vaguely thinking "White Stripes?" However that was fairly unhelpful as although the inspirational music & the instrumentation would overlap, the style was not especially similar. Equally The Bonnevilles might be seen as a comparison, but again, not particularly helpfully so. Stone Bear are their own people with their own sound & own approach.

Set number one reflected the gig: it was a pub setting & although there was an enthusiastic Stone Bear fan contingent up close, there was an audience to be won over, so there was a predominance of covers: tasteful ones with a touch of "Killing Floor" and a broom was duly dusted. More intriguingly, non-blues material was given the blues make over including a brace of Bruce Springsteen numbers, the Ramones inspired "Hungry Heart" and "Dancing in the Dark". What really got me sitting up however was an electrifying penultimate number which I had never heard before: suddenly we had a spot of "Voodoo Chile" style & groove in the Townhouse. "Was that an original?" I asked the band at the break "because I thought it was the highlight". They agreed that it was, and that they intended playing about four more in part two. I suggested that this would please me. And so to part two, when they launched into a blazing run of totally unknown material with just a minor detour midway into Little Richard. It is rare to see a band who'd played well earlier find a couple of even higher gears but Stone Bear certainly did. Their second set made it amply clear why Anthony & the BBC rate them so highly. I divide artists I review into two camps in my mind: those who play with heart, who pour passion into the songs they clearly love (whether covers or originals) and those who don't seem to. The former appear in my reviews, the latter don't. Stone Bear stormed through what they told me afterwards was their entire new album with a ferocity of attack & commitment which in no way distracted them from the finer points of their playing. It was a good idea too. I'd been checking out audience reaction throughout & it was the second set which set the house ablaze & got the non-committed involved. Yes, some punters will only respond to songs they know, but the savvy ones, whom you'd hope you'd find in a musicians' venue will latch onto unfamiliar material if it connects.

Anthony told me to check out Stone Bear: now I'm telling you to. You'll not regret it. If you catch them playing a pub gig, have a quiet word & tell them how much you'd like to hear their new album. Oh and don't forget the Squirrel gig too. They are a band who know how to put their foot on the accelerator & their career is clearly on a swift upwards trajectory.

It seems almost unreal and a bit transgressive to find myself writing a live review after so many months of reviewing the recorded activities of ...
[3 images] END_OF_DOCUMENT_TOKEN_TO_BE_REPLACED

A moment of pleasure, the more appreciated because it was unexpected, hit me last evening with the news that Stone Bear have released a new album, ...
[1 image] END_OF_DOCUMENT_TOKEN_TO_BE_REPLACED

It is always really great to have new talent introduced to you & it is a clear & highly  admirable feature of much of the music scene locally that ...
[4 images] END_OF_DOCUMENT_TOKEN_TO_BE_REPLACED

We are lucky to have more than our fair share of excellent blues practitioners locally: not only do they all possess an obvious love of the form as ...
[1 image] END_OF_DOCUMENT_TOKEN_TO_BE_REPLACED

Readers may well (I hope) remember   from an earlier review, my enthusiasm for the live act of Stone Bear.
[1 image] END_OF_DOCUMENT_TOKEN_TO_BE_REPLACED

I expect we all agree that music can actually do things to us & for us: improve our mood & morale, lift our spirits, transform our psyches.
[2 images] END_OF_DOCUMENT_TOKEN_TO_BE_REPLACED

I have to admit from the start that I found writing a review which captures the essence of Tigermask adequately, having seen him play at the Town ...
[1 image] END_OF_DOCUMENT_TOKEN_TO_BE_REPLACED