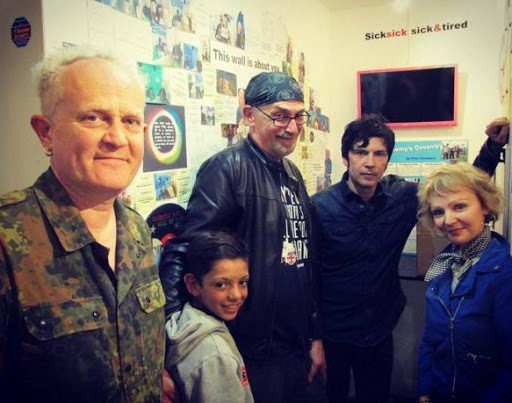 Each release is a fund raiser for the Museum & consists of artist donated tracks: a mixture of the rare & unreleased by established artists & the cream of current & emerging Coventry & Warwickshire talent, so they can exist side by side on the same records & give both a showcase to the wonderful artists around & give a picture of the continuity of artistry.

The first record features "Heartbreak City" by Roddy Radiation & the Skabilly Rebels (Roddy of course was lead guitarist/vocalist in the classic Specials lineup and wrote great songs like "Rat Race", "Concrete Jungle" and the Amy Winehouse covered "Hey, Little Rich Girl"), "Never Kill A Secret" by The Primitives, a 2017 remix of "Trains" by Crokodile Tears and ATTRITION's track "Two Gods".

The launch event at the Museum was packed with well wishers and supporters of the project, from band members, their  families & friends to Museum volunteers and  top local musicians & producers such as Roger Lomas, Paul Sampson (who produces both The Primitives & Crokodile Tears), Keith Fabrique, Sam McNulty, the BBC's Brody Swain, Julian Little, the legendary Dill (of Gods Toys and I)  and it was great to welcome the support of actor-musician Graham Fellows, who is also known as "Jilted John" and "John Shuttleworth".

Another treat was to welcome the Belgrade Theatre's Rosie Mackie (Communication Officer for Press, PR & Digital Media) with three cast members of the upcoming production "Godiva Rocks" together with playwright Alan Pollock: himself a former member of bands featured in the Museum. The play has clear resonances with the project, incorporating as it does material from acts featured in the Museum and on the record.

After speeches from "Alternative Sounds" team members Pete Chambers, Martin Bowes & Andy Holdcroft (the other team members being Chris Sidwell & Nigel Meffen), the party proceeded to two great sets by bands on the EP. Firstly Crokodile Tears played "Doctor Dee", "Cuckoo", "Francis Bates", "If Hippies Ruled The World", "Egg ‘n' Chips", "Trains" and "Noddy": "Trains" being their song on the EP. For this gig, Crokodile Tears were Chris Sidwell, Alf Hardy (renowned local multi-instrumentalist & Cabin Studios producer) and Jerry Richards (ex-Hawkwind & currently a Hawklord). They were joined on all numbers save the instrumental "Doctor Dee" by young Aston Sidwell on harmony vocals & percussion and for "Egg ‘n' Chips" by Sam McNulty, also on vocals & percussion. Aston's assured & affective vocals on his debut with the band brought much appreciation from the crowd.

Next up were Tracy Tracy & Paul Court of The Primitives who gave wonderful stripped down versions of "Spin-O-Rama" (one of this writer's favourite Primitives songs), "Lose The Reason" and "Crash". "Pure magic" would scarcely cover a description of the reactions to this unprecedented & wonderful performance. It was certainly what got everyone talking, before, during & after & will live in all our memories.

There was an incredible buzz around the evening, the performances & the whole project. After the launch, Chris Sidwell  had this to say: "a wonderful sense of community, respect and love, even. The thing that unites us all is music but there was so much laughter the other night". That is totally true for the launch night but I think it holds true for all the other interactions within the project: all the wonderful generous musicians the team have spoken to who have given tracks (and of course that includes the dozens whose work will shortly appear on the album series), all the people in the places selling the EP and all the music fans: community, respect, love, music, laughter.

Photographs of the event & footage of each performance can be found on the Coventry Music Museum's Facebook page at: https://www.facebook.com/groups/Covmusic/

Most readers of this piece will know of Joe Meek & his revolutionary production techniques, but fewer will be aware of his work with one of the top ...
[1 image] END_OF_DOCUMENT_TOKEN_TO_BE_REPLACED