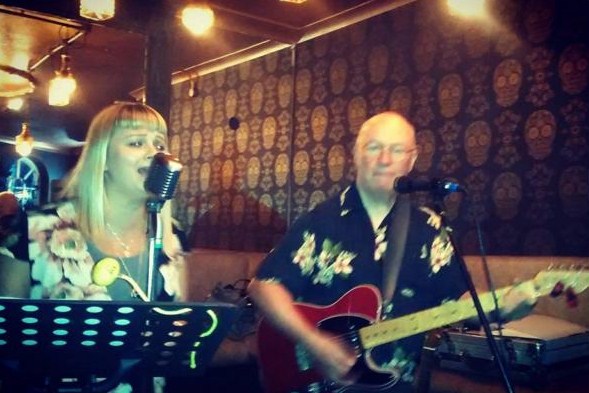 This review I suppose is something of a series of tip offs to Hot Music Live readers: to be honest, my main reasons for originally attending the gig were personal curiosity and potential pleasure but so delighted with what I found was I that not only can I feel comfortable in penning this review but can go further & recommend both venue & artists for your consideration. The fact that I was for all intents & purposes commissioned on the evening to do this piece is icing on the cake....

I guess like me, many readers used to attend "Melody Lounge" nights at the Grand Union in Leamington, promoted & hosted by the admirable Matt Hernandez.  I saw so many great local acts there playing acoustic sets & it played a vital part in starting some great careers: the Folly Brothers played what was their first ever live public gig (as a duo) and I saw Jake Melles play a superb very early performance there too. Sadly, despite all Matt's love & efforts, the nights are no more as the venue closed.

To my delight though, it has recently reopened and even better has live music in the downstairs "Apehangers" bar (upstairs is the Procaffeinate cafe). This fact alone was enough to impel me to check it out & I must say how favourably impressed I was.

I do remember once seeing South Town play downstairs (when they were a four piece) but otherwise I think everything I saw was up above. The move into the lower bar is, to me an improvement, with a much better alcove for performers & less audience congestion: no longer do some of them have to push through the band to get to the bar or toilets. The decor has clearly been a major issue & looks splendid: with care, attention to detail & suitable investment (though putting a very large motorbike into a small bar must have gone through some debate I imagine).

The other main draw of course was the specific act on tonight. I had in fact wanted to catch Chris Gibbons with Miss Songbird at Art in the Park a couple of weeks earlier, but getting there in time for their set was impossible as I was busy reviewing Morocco Dave at the Coventry Music Museum at the same moment (see previous issue of Hot Music Live). Thankfully someone else on the Hot Music Live team kindly reviewed that particular performance.

This time however I made it in time (if wetter than I had intended) & caught the entirety of their two sets. Guitarist Chris Gibbons will not need much introduction to many readers: Chris has played & continues to play live in our area extensively as a solo performer, with a band & now as a duo with Miss Songbird (Claire Glasbey).  If you have not yet heard Chris, for goodness sake please check him out: one of the greatest guitarists in so many styles, deploying the blues, r ‘n' b, soul, jazz and rock tonight alone. Don't take my word for it: local musicians flock to his gigs & who am I to argue with the taste of musicians of the calibre of Mick Jones (the Foreigner Mick Jones that is) Ben E King (one of whose songs Chris wrote) Viola Wills, John Paul Jones or Leo Sayer with whom he has worked nor Universal films for whom he writes music.

This latest collaboration brings a new dimension to his work & it is interesting how musically ambitious they are. Chris sang a few solo numbers, predominantly blues ones but also an exquisite acoustic Waylon Jennings song, but the bulk of the set was an eclectic mixture of styles that both musicians moving through with ease & verve. Sounding like they had played together for years, rather than weeks, they switched effortlessly through the genres listed above & even mixed them up: the real jaw dropping moment being a version of "I Heard it Through the Grapevine" played as you might expect the Jimi Hendrix Experience to have done it.... and this from a singer/guitarist duo equally at home with jazz standards. Little in the set seemed easy to sing nor to play (I did recognise the odd chord from time to time but only a few) which tells you a lot about the calibre & confidence of the two of them. The audience, who seemed a pretty discerning bunch, were extremely appreciative.

I intend to keep an eye open for further gigs at Apehangers & I look forward to catching Chris & Claire again soon. As I said at the beginning, I hope that you will take my advice  too.

It has been far too long since I had last caught a full Titine La Voix live set.
[1 image] END_OF_DOCUMENT_TOKEN_TO_BE_REPLACED