The Shapes at the Zephyr Lounge


The Shapes at the Zephyr Lounge 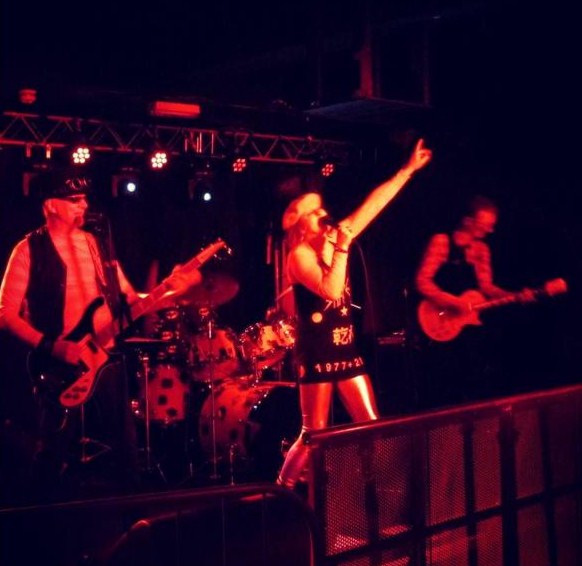 Readers will recollect how in 2016, Leamington's favourite punk band The Shapes reconvened from around the world to celebrate their 39th anniversary. Rather more conventionally, (not a word many reviewers  of the band have ever deployed), the band did it all again recently for their 40th.

On Friday 4th August 20127, a four piece version of the band (sadly guitarist Steve Richards was unable to join in due to personal commitments) played Leamington's Zephyr Lounge. All four being from the classic lineup: Seymour Bybuss (Ben Browton) on lead vocals, Brian Helicopter (Gareth Holder) on bass & backing vocals, Tim Jee on guitar & drumper (sic) Dave Gee. How many other bands with such a long story could do so I wonder? For those with an interest in how the Shapes dress, Mr Helicopter was channelling steam punk, Mr Jee was somewhere between Edward VII and 1960s Carnaby Street, Mr Gee came in a batman motif suit  & Mr Bybuss was responsible for his own Shapes dress. And I mean dress.

Support came from top Leamington troubadour Huffy & London's Monkish: both seasoned Shapesupports. Huffy played two sets either side of Monkish: his usual blend of wit, social commentary & brevity, all in all a suitable match for the headline act. A little moment of magic was when he started his final number, a cover of "Waiting for the Man" and as sundry Shapes stole onstage behind him & joined in, it mutated into a new & wonderful form.

From the start of the Shapes' set (as ever was, "Let's Go to Planet Skaro" led into "College Girls" from 1979's "Part of the Furniture" EP), the band had the audience in the palm of their hand. They came from all over, many making long trips for this comparatively rare gig. It was great to note the presence of several members of other bands which will be joining the Shapes shortly on the forthcoming "Alternative Sounds" compilation being put together by Coventry Music Museum.

Unsurprisingly, the songs were reworked slightly to address the absence of one guitar part, which gave Tim a number of opportunities to demonstrate his skills and also Ben's tweaking of some lyrics. Both were most successful. Sticking to those songs they had released over the years, the set passed all too quickly: even counting a seven minute plus "Blast Off!". As the band themselves point out, their playing these days is in fact superior to back in their heyday around 1980: infrequent performances & intervening large oceans and continents between their current abodes notwithstanding.

Will Leamington see them again? A lot of us surely hope so.

The Shapes return for 39th anniversary

It has been quite a few weeks for legendary Leamington band The Shapes.
[1 image] END_OF_DOCUMENT_TOKEN_TO_BE_REPLACED

I have often written about the wonderful, in fact the weird, thought provoking & wonderful evenings Johnny Satsangi puts on at the Zephyr Lounge ...
[1 image] END_OF_DOCUMENT_TOKEN_TO_BE_REPLACED