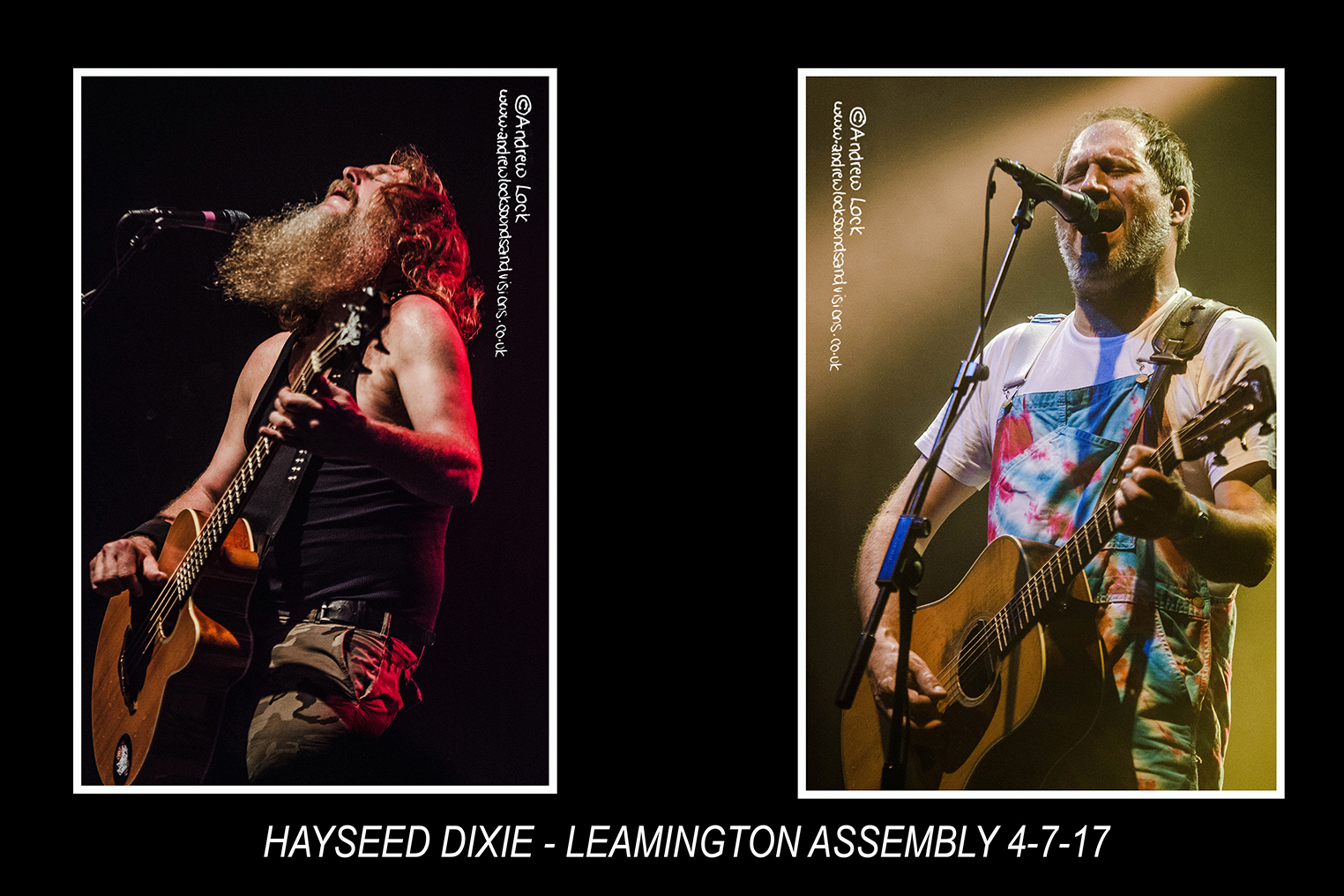 **FOR PERSONAL REASONS THIS MAY BE MY LAST PIECE FOR A WHILE, THANK YOU TO THOSE OF YOU THAT HAVE GIVEN ME POSITIVE FEEDBACK AND HOPE TO BE BACK SHORTLY**

Special guests and on the subject so refreshing to hear Hayseed frontman Barley show his contempt for bands that make support acts pay for their slot on a tour was impressive blues/southern rock outfit Thirteen Stars.That southern rock touch along with a fine sense of humour was evident on the tongue in cheek ‘Daddy's Girl' and they showed their heavier side on ‘Only a Soldier' which was dedicated to all in the armed services and for me had a little of the style and power of the Dio era Sabbath number ‘Country Girl'.
This hard rocking band had a powerful live sound and I loved the singers comment that their latest video had managed to get 30 U TUBE views but as he put it "what can you do up against cat videos and dogs playing the piano?".
As for headliners Hayseed Dixie you know exactly what you are going to get and get it we did with so many iconic rock covers given that Hayseed bluegrass treatment, hilarious originals, all of the stage antics us fans have come to love and of course the wit and wisdom of Barley Scotch.
You also must not forget what top rate musicians the band are and if you stop dancing, smiling and laughing long enough to take a look at the speed of the picking it is a sight to behold and also Barley also has such a powerful rich voice which would grace many genres of music.
Set list was just about perfect with plenty of their most memorable rock covers in place including AC/DC classics ‘Dirty Deeds Done Dirt Cheap' (show opener), ‘Touch Too Much' and ‘Highway To Hell', Motorhead anthem ‘Ace of Spades' the stage bathed in red light for Sabbath's ‘War Pigs' and the whole band on vocal duties for their version of epic Queen classic ‘Bohemian Rhapsody'.
From their latest album where they branch out the covers to other genres we had clever reinterpretations of Elvis Costello's ‘Oliver's Army', and the fastest I would imaging possible version of Bob Marley's ‘Buffalo Soldier' and many more.
The band originals include a spirited ‘Kirby Hill' and introduced with the story of how Barley got a check for 3000 dollars because Justin Timberlake performed it at a show the hilarious (if messy) ‘I'm Keeping Your Poop'.
As mentioned so much to see and enjoy on the visual side with mandolin player Hippy Joe Hymas in particular an absolute firebrand pulling faces and making gestures all set long and playing the main joker role (and oh so funny with it).
A Hayseed Dixie gig really is a show and a half, great music and side splitting moments as well as top draw musicians who seem to be having as much fun as the audience.

American bluegrass rockers Hayseed Dixie will be celebrating their countries independence day this year by playing the Leamington Assembly on (of ...
[2 images] END_OF_DOCUMENT_TOKEN_TO_BE_REPLACED

AMBER RUN have announced an acoustic live show ‘AMBER RUN UNPLUGGED' at The Assembly, Leamington Spa on 10th May 2022 TICKETS ARE ON SALE NOW ...
[1 image] END_OF_DOCUMENT_TOKEN_TO_BE_REPLACED