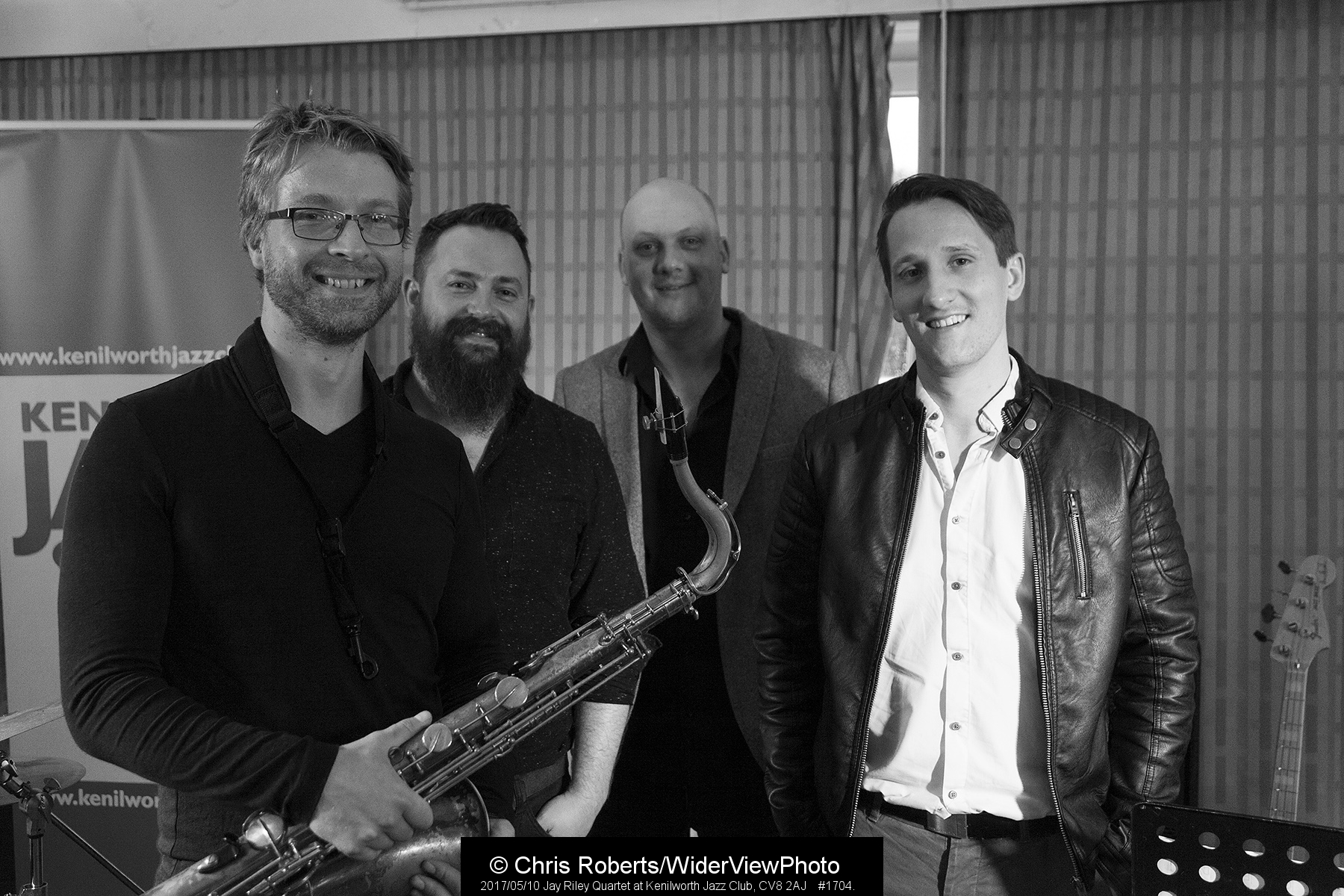 1 of 8
Jay Riley, who runs the Stratford Jazz Club, launched his latest album "Light from Dawn" at Kenilworth Jazz Club earlier this week.The Jay Riley Quartet consists of Jay Riley (tenor saxophone), Matt Bell (keyboards), Jason Page (bass guitar) and Tom Haines (drums).To a large enthusiastic crowd, the band kicked off with an extended version of "Carefully Happy" with some laid back saxophone and a great piano section.As band leader Jay Riley explained he has been running the Stratford Jazz festival for over 2 ½ years, and before he took over, remembered listening to the great sounds of experienced musicians at the Sunday night sessions at the White Swan in Stratford.The songs on this album, as Jay explained, were about the last 10 years and his emotional experiences of life, including marriage and children.The next song was "Matching Models" which was about a gig he did in Harlow with Stein (Stephen Steinhaus), which was as support to Chaz and Dave. Due to arriving at the venue so late, they ended up on stage after Chaz and Dave to a very small audience. Chaz and Dave had arrived in matching Ford Mondeos.The song had some great slap bass from Jason with matching jazz style on sax with energetic piano support.They followed this with "False Normality" with an intro from the tenor sax, then joined by drums and then the full quartet. Then with the piano lead with a more trad. jazz tune.Then we had a bit of Iceland with a Bjork song "Hyperballad" which started with a laid back style and building to a louder crescendo before a slower mellow finish.This was followed by "The Fall" which was darker in style, with a funky bass line, eerie keyboards, strong drums and mellow sax.Finishing the first half was "Ghost in the Mirror" started by Tom on Drums in 5/4 time, then joined by Jason on bass, along with echoy keyboards and sax on a journey. This was finished off with Matt on keyboards in remodulated style.After a break for drinks and chat the second half started off with Jay Riley solo on keyboards for "Sorrows in the Morrow", which was first played last summer at Stratford Jazz Club. This was a slow and mellow with an ethereal sound.Now with all the band back on stage we had the title track from the new album "Light from Dawn" which was a more upbeat song with bright keyboard sound.The next song "Orange" was a new song, not on the album, that was only played by the band for the first time the previous week. It was about Jay spending time with a mate listening to music, including Massive Attack. His mate had a bright orange Audi TT which is where the song title came from.This had a slower laid-back start with slow bass line and went into a great interplay with sax and piano into a quicker section."Devon Express" was about the journey on train from Birmingham New Street to Paignton which passes Teignmouth in Devon. This had a funky bass line with strong quicks keys with a hard drum beat with a very soulful sax part, with an off-beat style rhythm with a sharp finish.Jay son Rowan playing a South African Vuvuzela inspired the next song called "Rowan's Riff". This song started as a 6-time quick riff with strong jazz piano from Matt with quick fingers and included some great sax & piano interplay. This then moved to a ½ time section with slower sax. Then a high-speed drum solo from Tom before a strong band finish at quick time.Then to slow things down we had a slower song "Stronger than you Think" with its piano intro with slow mellow sax with soft drums which then raised its pace to a quicker middle part crescendo with strong sax part before a slower finish.The final song of the night was "Smiles" which was a very up-tempo song with quick piano and heavy drum beat, bass backing and strong sax sound into the mix. At the end, this faded out in a slower tempo. Jay will be back hosting the Stratford Jazz Club with the next night featuring Kieran Garrett feat. Dave O'Higgins on 14th June at the Stratford Arts House.Kenilworth Jazz Club are now on their summer break, restarting on 4th September with the Nick Dewhurst Quintet.

Exploring the light and dark experiences of the past 10 years, Jay Riley released his debut album, Light from Dawn (https://jayriley.
[2 images] END_OF_DOCUMENT_TOKEN_TO_BE_REPLACED

MIke Hall and friends at the Kenilworth jazz club

A night of fluid, elegant standards from the very mellow Mike Hall on tenor.
[1 image] END_OF_DOCUMENT_TOKEN_TO_BE_REPLACED

Even with a cold Shiela Waterfield was on great form at Kenilworth Jazz Club on June 6th for the last session before the summer break.
[0 images] END_OF_DOCUMENT_TOKEN_TO_BE_REPLACED