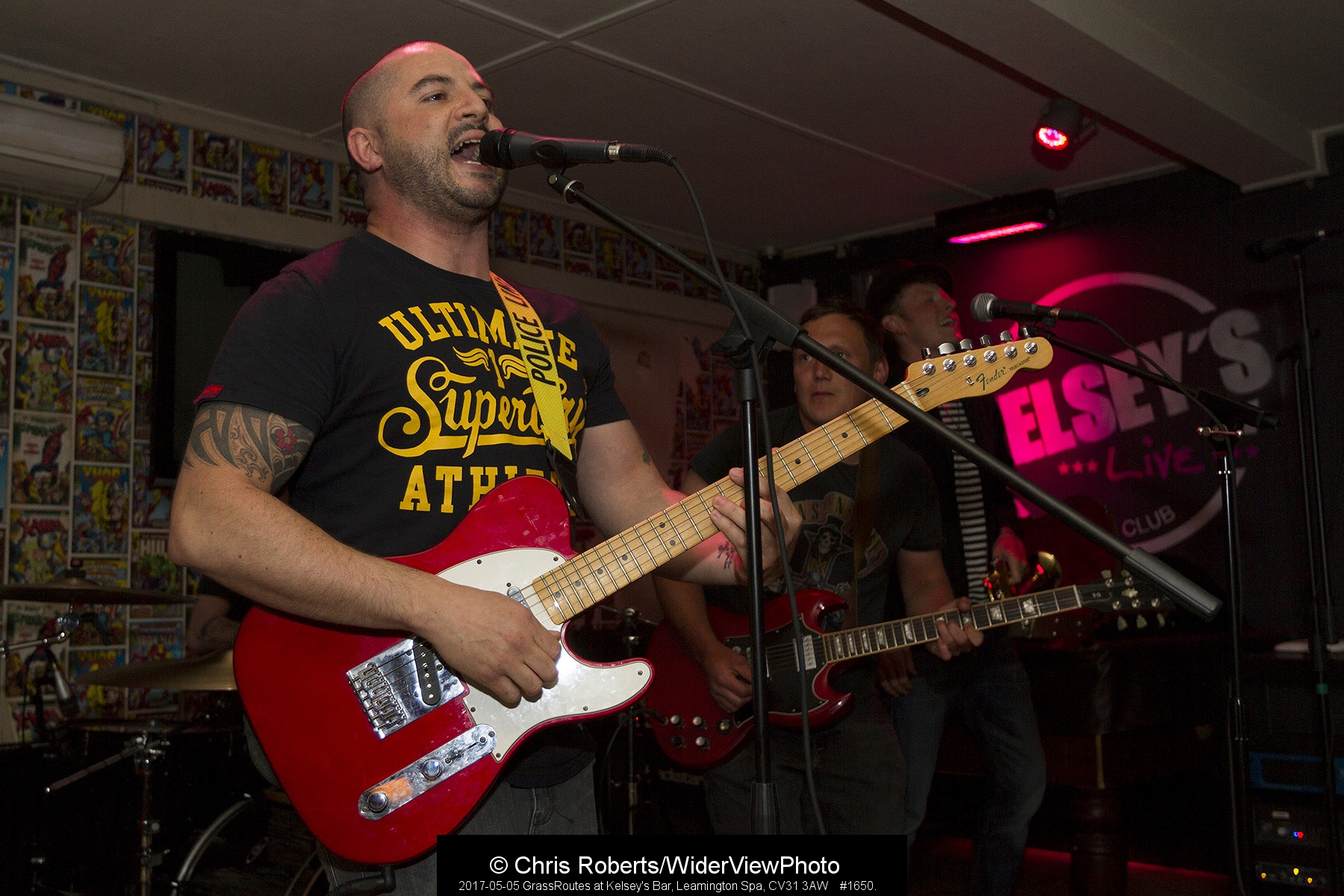 1 of 12
The local Leamington based ska/reggae band GrassRoutes launched their new EP – Routes EP at Kelsey's bar in Leamington Spa on Friday 5th May.The support acts were hip-hop artist Sizzi Gee and alternative rock band Dark Swan Dive.The 6-piece band have been gigging both locally in South Warwickshire and in the wider area for over 6 years, and have built up a large vocal following.To start off the evening Birmingham hip-hop artist Sizzi Gee took to the stage which a set of his own songs including "Live Forever", "Don't Frown", Sad Truth", Floats Your Boat" and "Alone" and a cover of Churlish Gambino's "Redbone"As Sizzi Gee explained "I wrote those songs for my album "Inside my Thoughts". The album includes various tracks based on how I'm feeling in life, whether it be sad, happy, angry, reminiscent" "I've been making songs with my mate in his bedroom for the past year and we've made a couple of videos for YouTube and stuff, and my producer has a high drive in life to succeed, so he's a good person to make and release music with." He is the nephew of GrassRoutes lead singer Jay Hall and was encouraged by him to take to the stage.Next up onto the stage was Birmingham based Rock/Alternative band Dark Swan Dive who have been playing the local West Midlands circuit since Summer 2015.The band line-up was Anthony Merrick (lead vocals), Kyle Sheldon (guitar), James Bagley (bass) and Chris O'Toole (drums).The band play with a very energetic lead singer (Anthony) who plays to the crowd and interacts with the band members, with their strong rock sound and passionate vocals.As the band said afterwards "The new songs we played tonight where the first time we've ever played them live. Most of our songs are up for interpretation by the audience, we just love playing live and loud."The band kicked off with "Unfinished" and then moved onto a new song "Radaway" which was the first time that it had been played live to an audience.Then they played "Crossed Paths" and then the first song ever written by the band "Every Season" which was about the girl who pushed the group member to form Dark Swan Dive, so as the band said "So essentially our Love Ballad to Her".Then they played "On It Goes" which is about living with yourself and coming to terms with who you are. Then we had another new song played for the first time "Still Alice" which is about fighting dementia, and written by lead singer Anthony, who was inspired after watching the movie of the same name. This was another song played for the first time in public and was well received.They finished they set with "Route 44" which is about living the life high as a teenager and getting out the other side!.Then we moved onto the main event with GrassRoutes EP launch set of songs.The bands line-up was Jay Hall (Lead vocals, rhythm guitar), Ben Knight (Lead guitar, backing vocals), Justin Bygrave (Bass guitar, backing vocals), Andy Haring (Keys, & backing vocals), Ethan Shipley (Trumpet) and Tom Graham (Drums).The set was energetically launched with "Subliminal" which was inspired by how television can make you feel the need to be a certain way. This is a classic ska style song with great trumpet and guitars and vocals.Then we had the first of the tracks from the new EP "Peelhead" which is based on an old Jamaican folk song that Jay Hall's grandpa use to sing to the generations of his family.Next up was a more political song "Amnesty" which Jay Hall wrote at a time when he felt a bit down about the deaths of youngsters dying from stabbings. This was a funky reggae song with multi-layered vocals. Another song performed was about employment issues, through this extended recession, "Jack of all Trades" – as Jay was "getting sick of losing jobs that I thought would be permanent" Then we moved onto a song written by Justin Bygrave "Death of an angel" which is a great ska song led with Jay and energetic drumming and great trumpet playing."Forgotten Society" which is in the style of an old pub singalong with great ska trumpet and off beat reggae style, with backing singing from Lady K. Then with the song "Monkey Man" they played in the classic Two Tone ska style and "is just a skankin bad boy"Then a couple of crowd pleasing covers with "Who Knows" for its patios authenticity! and "Sheila" with its rap style Another song about something that Jay Hall feels strongly about was "Trouting for Girls" which is "About the pouting epidemic and the need to destroy your face with plastic surgery" This was back to Reggae with trumpet, offbeat guitar and strong drum backing. Then we had a collaboration from Justin Bygrave & Jay Hall "Wolf" which Justin created and Jay co-wrote about living in a protective bubble. The final song was "Grouze" which was about Jay's old man (grouze is his nickname).By the end of this set the venue was rocking to the ska/reggae style of a very polished and energetic local band, who are looking to get signed up, and should do on this performance.The sound was provided, with thanks from the band, from Tallawah Sound.The next gigs for GrassRoutes are on 13th May when they appear on the bill of Shuddervision Meetz Dub Shed at Club PST in Digbeth, Birmingham. Then on May 26th they are supporting ‘Arthur and the Invincibles' at the Zephyr Lounge in Leamington Spa. Finally, on Sunday 28th May they are playing at the Black Horse pub in Shipston-on-Stour.A full set of copyright images from this gig can be viewed at https://www.flickr.com/photos/widerviewphoto/albums/72157680750833252