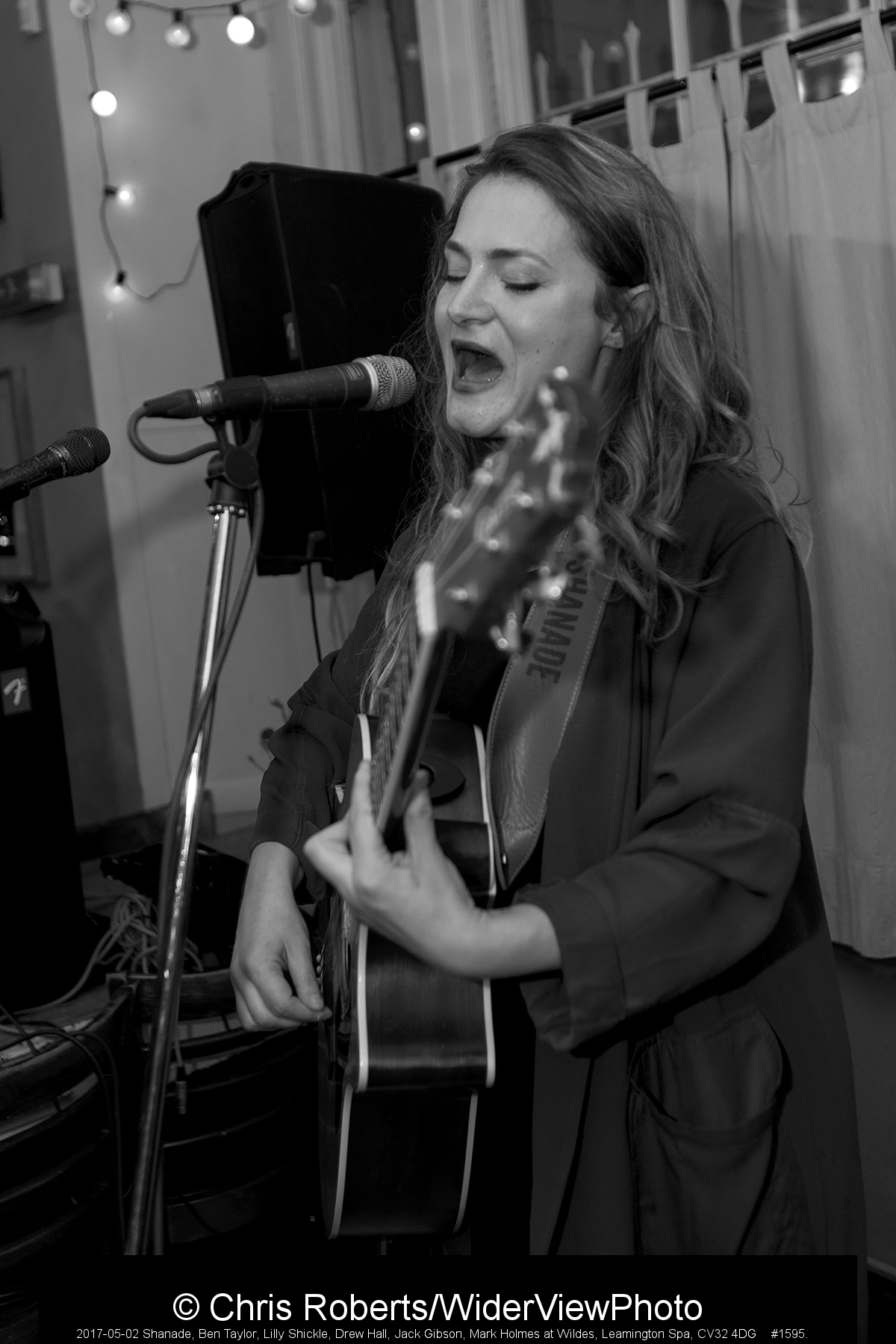 1 of 9
Another exciting line-up of songwriters had been again pulled together by host Shanade Morrow, for the monthly Songwriters night at Wildes Bar & Restaurant in Leamington Spa.The evening is setup as a platform for songwriters to perform their new songs to an appreciative audience, with a lot of amazing talent in Warwickshire & Coventry areas.First up was host Shanade on vocals and acoustic guitar with a couple of numbers, with firstly one of her anthems "Lion" and then a newer song "Please Yourself".Following on was Mark Holmes with his traditional style blues songs with acoustic guitar accompaniment. The first song was "Sweet Home Chicago" but with his own lyrics to the traditional blues number. Next we had an older composition which he penned at the age of 16 with "But for the Grace" which was a slower number to start, but then building to a quicker pace before slowing down at the end. Next was a 1920s Sam Chapman song "Malverne Down and a Pallet on your Floor" with with Mark's modern words. Finally, he performed a song called "Royal Leamington Spa" which was more modern in style and about a pizza joint in Leamington.Then it was Drew Halls's turn to step up to the stage, with acoustic guitar, with numbers that had just been given working titles.First up was "2017" with its catchy guitar style and soulful singing style. Then we slowed down a bit with "Mindfulness" with its slower mellow sound and plaintive singing and smoother guitar accompaniment.As Drew commented "It is a rare opportunity to sing my own songs as I normally sing covers"Then we moved into a Blues style song with "Grimey" with great blues guitar backing and powerful singing style.Lastly we moved into Reggae with a song called "Marley Song" which was written 6 years ago whilst at University, and is a homage to great Reggae musician Bob Marley.Next up on stage was local comedian Horatio Gould, which was, as he explained, his real name. He kept the crowds amused during his 5-minute slot with locally referenced humour.Travelling up from the north Cotswolds we next had Lilly Shickle with her passionate singing with acoustic guitar accompaniment. She started off with a Paolo Nuttini song "Pencil Full of Lead" with its modern style with blues overtones.Next Lilly gave us one of her own songs "Home" with its soulful singing style, slower pace with strong rhythm guitar backing.She explained she is currently in a gap year before going to study music at University of Falmouth in September 2017.Then another of her own compositions "Suitcases" which was about her friends leaving for University and other pastures new. This was another slower but melodic song with strong lyrics and quieter guitar backing.To finish her set, she played "Holly" which was her newest composition and was about an old Facebook friend she has not seen for 10 years, and was very Alanis Morrissette in style.Then a total change of style with hip-hop artist Jack Gibson who gave us some exciting renditions based around classic songs including Frankie Valley & The Four Seasons "Reach Out", then "Houses of England" based on the classic The Animals song "House of the Rising Sun", then to finish "Sons of Angels" which went down a storm with his legion of fans.Then Ben Taylor, who normally plays as part of the 4 piece band Man Made Man, stepped up with his acoustic guitar.As he told the audience "This is the first time I have played solo for ages"He started with "The Tourist" which was a song with laid back singing style and rhythmic guitar backing. Then he moved onto "The Long Way Home" with its blues style lyrics for a slower style song. It has some strong powerful guitar chords and playing with a plaintive singing style.The next song "Lets Grow Old Together" was about his 17-month daughter Ivy and was folk influenced with a bit of early Bob Dylan thrown in. Then a quicker song "Not so Haunted" which was modern folk in style, but heavier with strong guitar chords to back the lyrics.As an encore, he played the Stone Roses song "I want to be Adored".The next monthly Songwriters night will be held at Wildes Bar & Restaurant on Tuesday 6th June.For a full set of copyright images please review the Flickr Album at https://www.flickr.com/photos/widerviewphoto/albums/72157683380405996

Photos from the March 2017 session at the Songwriters evening, hosted by Shanade Marrow, at Wildes Bar.
[10 images] END_OF_DOCUMENT_TOKEN_TO_BE_REPLACED