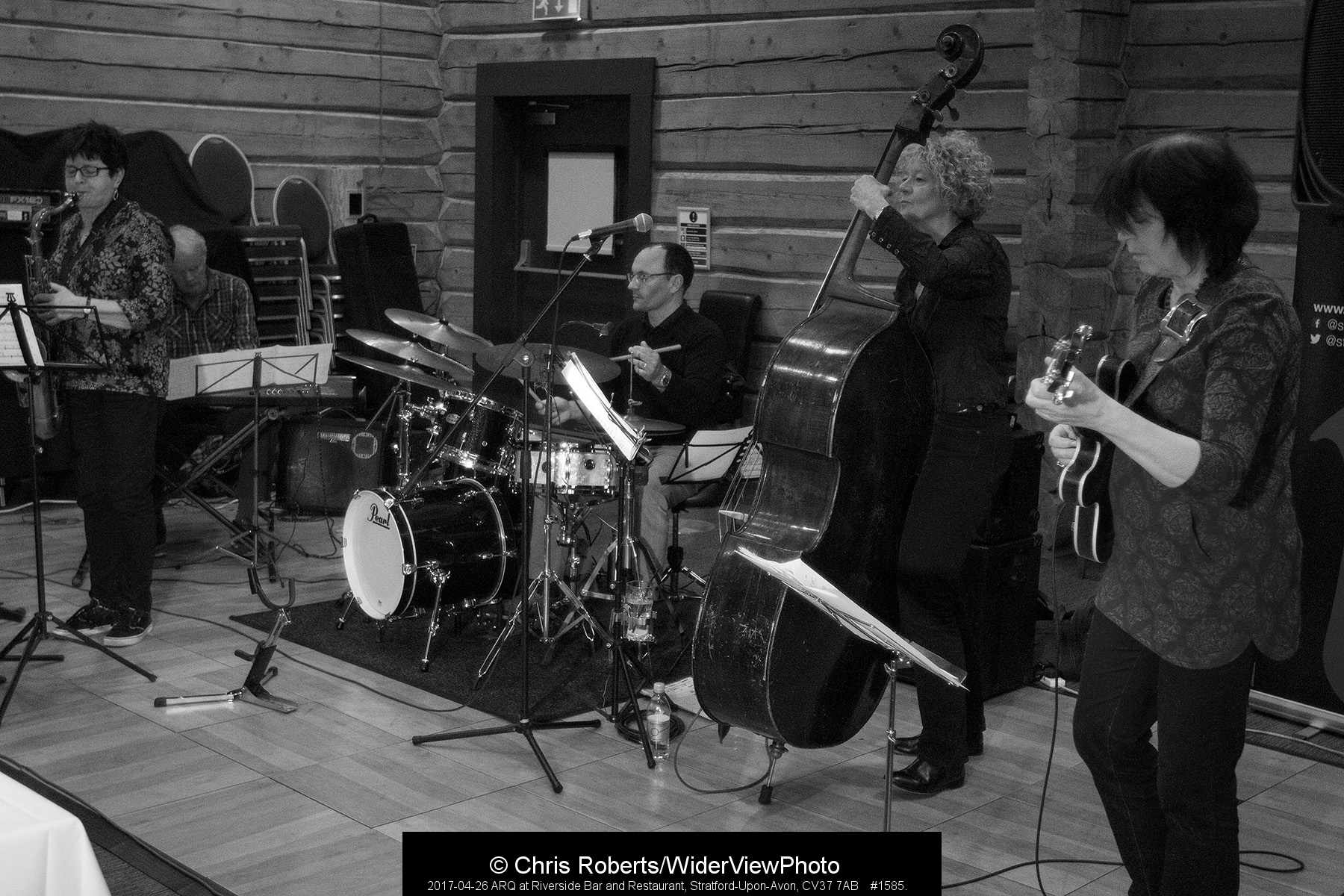 1 of 6
The London based Jazz group ARQ, last week, played a gig at the Riverside Stratford venue, in Tiddington, to an enthusiastic crowd. That was part of the Stratford Jazz Club program, hosted by local musician Jay Riley.As Jay stated "I have a real passion for jazz and live music and I want to encourage as many people as possible to unplug themselves from their home-life, venture out to witness some amazing events and meet some really cool, like-minded people." The group, who played all original music, are led by Alison Rayner (double bass) along with Deidre Cartwright (guitar), Steve Lodder (keyboard), Diana McLoughlin (saxophone) and Buster Birch (drums).They started off with a piece called "Musicophilia" which was a trad jazz number with great interplay between the sax and electric guitar, backed up with double bass, keys and drums.New York jazz style was the basis of "New Day" with strong piano and sax, along with heavier drum beat and haunting electric guitar.The following song "A Magic Life" was based on the conversation Alison had with a Polish boy at a music exam, who asked "Is music stronger than magic?" The song has a bit of a folk influence, with Alison's family originally from Shetland.Past family holiday's in Swanage, that Alison had when a child with the views of the bay, set her off to write "Swanage Bay". This was a very mellow tune with a slow laid back style with a sax lead, along with soft smooth drums, along with a keyboard lead from Steve.The last song of the first half was "Half a World Away" with parts for guitar and piano lead portions, followed by a strong tenor sax section from Deidre.After time from refreshments and the Stratford Jazz raffle, Alison and her group continued with "Mr Stanley I Presume" which was in homage to the great bass player Stanley Clarke. This was influenced by Alison's influence of jazz fusion and funk in the 1970s, including Weather report and Chic Corea. The piece included leads for both sax and piano.Next up was "Friday's Child" which was written with her Mother in Mind, and was another slow mellow piece with Steve scaling the piano along with a laid bass double bass part.After a trip Kerala in India last year, along with its Indian drummers, elephants and incredible rhythms Alison wrote "Trunk Call". The song starts off with Buster on drums imitating the song of elephants which leads into an up-tempo piece with great interplay between sax and piano, backed by the double bass. The song at the end segways into jazz funk and then into an Indian vibe, with Buster using an Indian drum.The last number was "The OK Chorale", which was written by Steve, and was a more tradition jazz piece at a quicker tempo with major pieces for sax and piano.During the performance, the audience applauded after each solo piece and at the end the group was loudly applauded.Next up for Stratford Jazz Club is an appearance by top UK saxophonist Jean Toussaint on May 10th at the Riverside venue, with 8pm startThe full set of copyright images can be found in a Flickr album https://www.flickr.com/photos/widerviewphoto/albums/72157680587148292