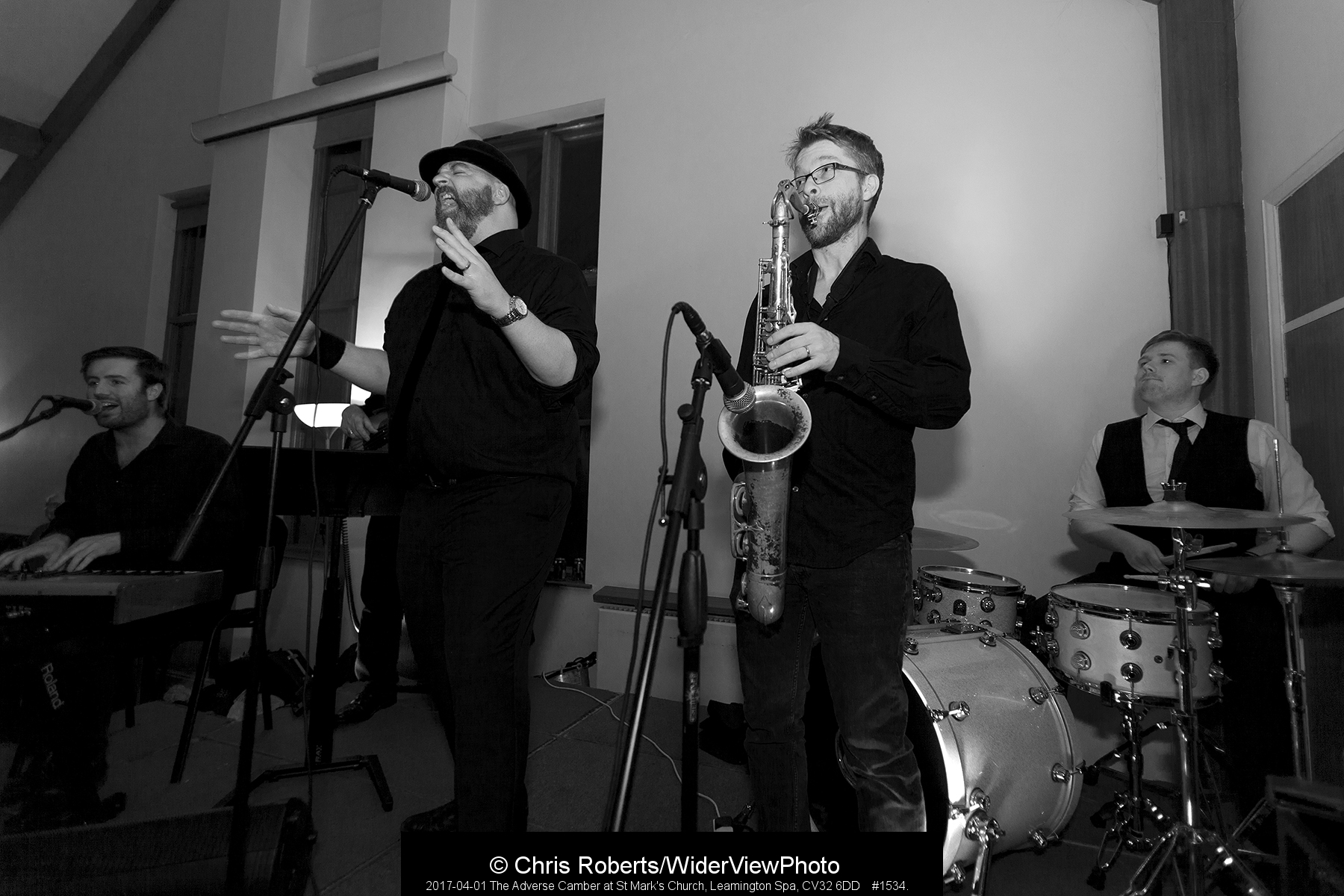 1 of 8
A great night of swing music was held on Saturday at St. Mark's church, Leamington Spa, with Steve Steinhaus's Swing Band (aka The Adverse Camber), helping assist with fundraising for an updated kitchen in the church hall.The parish is currently interregnum with the new vicar Rev Jo Parker being inducted by the Bishop of Coventry on 6th September 2017. Rev Parker will be moving as vicar from St. Georges church Hyde in the Diocese of Chester.The evening had enticed a large crowd who wanted to hear great 50s swing, blues, soul and funk based tunes, who came along in period 50/60s outfits and danced the night away.The band line-up was Steve Steinhaus (vocals), Jay Riley (sax and backing vocals), Tom Yeoman (Drums), Benny the Bullfrog (aka Mark English) on bass guitar and Elliott Rooney (keyboard and vocals).The band's first set included "Hey boo a re Bop" (Louis Jordan), "Fly me to the Moon" (Frank Sinatra), "Kiss" (Prince), Caledonia (Fleecie Moore) and "Shake a Tail Feather" (Ray Charles) from The Blues Brothers classic film. The band mixed up the sound with great sax playing from Jay Riley, interspersed by Eliott Rooney's funky keyboards, backed up by Benny the Bullfrog on bass and Tom the youngest band member on drums. Steve Steinhaus (Stein) led from the front with his powerful vocals showing his Chicago roots blues and rock background.After a break to give the audience time to get some more drinks and delicious cakes, and to have a rest from the energetic dancing, Stein and the band returned to the stage to anticipation from the crowds, who were ready for more choreographed dancing led by Colin Lent and friends.The band gave us "Tequila" (The Champs), followed by "Flip Flop Fly" (Big Joe Turner) with Stein leading with all the actions, "St James Infirmary" (trad.) sung as a dedication for evening organiser Penny Mitchell.Next Elliott Rooney stepped up to mic to sing the vocals (along with his keyboard playing) on "Route 66" (Bobby Troup) and the song "I Wish" (Stevie Wonder). Stein the gave a great rendition of Stevie Wonder's classic song "Superstition" which was medley'ed in with "I Wish" with the crowd joining in on the vocals.After wild applause at the end of the set the band played for an encore a medley of "Choo choo cha Boogie" (Louis Jordan) and "Night Train" (Lewis Jenkins/Duke Ellington).After the gig Steve Steinhaus expressed his satisfaction with the gig. "We have played here now 3 times for 3 great causes and with such a great crowd and good numbers I'm really hoping we've raised a healthy amount for St. Mark's restoration fund. It's really our pleasure to play for audiences and causes like this and we are always honoured to be asked to do so by Penny (Mitchell)."The full set of copyright images from this Steve Steinhaus Swing Band concert can be viewed at https://www.flickr.com/photos/widerviewphoto/albums/72157682114535435