Music at the TUMP


Music at the TUMP 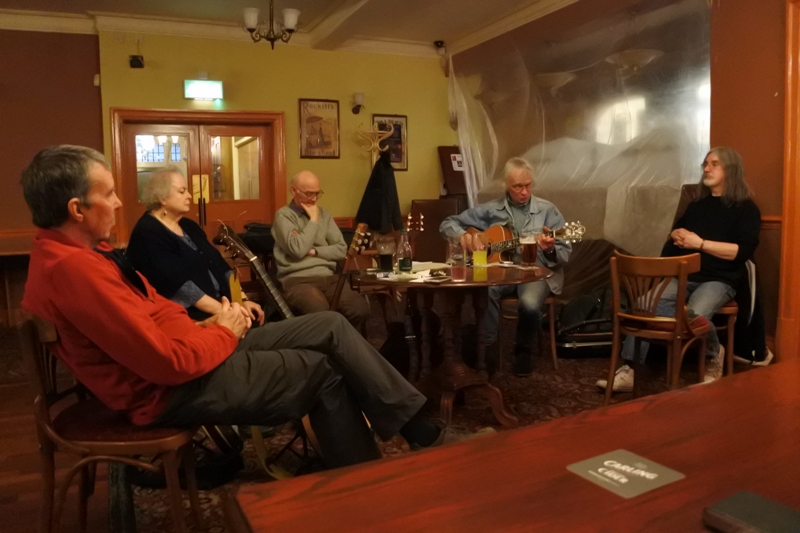 1 of 2
Not so much of concert, more like having a few friends round to sing a song or two and exchange anecdotes. That is a pretty good way of spending evening right? Well that is what Barbara and I just enjoyed at "The Tump" folk club. As it was one of their "non-guest" nights, i.e. there was no featured artist appearing on the bill, a group of regular musicians gathered and made us very welcome. Max Wright kicked off proceedings nicely with a traditional Irish song adapted by the Dubliners, "Three Lovely Lasses from Kimmage." Sitting next to Max was Jan Wisdom who with her husband Terry singing harmony whilst playing lead guitar to her rhythm, sang the Nino Tempo and April Stevens classic "Deep Purple". Terry, who together with Jan forms the duo, "Highly Strung" then entertained us with Duke Ellington's "Don't Mean A Thing" (if it ain't got that swing) Jan bringing along the rhythm. Next in line was Rob Oakley who runs his own folk evenings (Sty Folk) at the Green Lane Social Club in Coventry (postcode CV3 6BH) which is on the corner of Beanfield Avenue and Leasowes Ave. Rob then sang and played a melodic version of a James Thornton song which belies it's age. "When you were sweet sixteen" was written almost 120 years ago. but it sounds as fresh as when it was new. The Furies and Davey Arthur had a big hit with it in the 1980's. Controversially, Thornton sold it to two publishers, M. Witmark & Sons and Joseph W. Stern and Co., and it consequently became the subject of a lawsuit. Dave and Toni Arthur used to be well known on the circuit before Toni pursued a career in children's TV. The baton was then handed to Nigel Ward, he plays in several bands locally including "Rack and Ruin" and "The Sly Old Dogs" Keep an eye out for their gigs whilst out and about. Nigel pulled out his Paul Simon songbook and selected "I Am A Rock" to delight us. "John" sitting by the door, then brought us up smartly with a song from the deep south. "Strange Fruit" is a painful story which was blacklisted in the US because it too accurately described oppression and lynching of African Americans that took place in the early 20th Century. More recently it received some publicity because Rebecca Ferguson, when invited to sing at the inauguration of President Trump, said she would only do so if she could sing "Strange Fruit". I don't believe I remember hearing her sing at the ceremony.Then things took a downward shift as it was my turn. Thankfully my adaptation of a Max Miller song was soon over and we set off round the circle again. The songs varied a great deal from Country to Jazz and Blues, even to the Wurzels with some Django Reinhardt thrown in not to mention Bob Dylan of course a couple of times. Round and round the circle we went, picking up songs by Hank Williams and Donovan on the way, stopping off for a Louis Armstrong mainstream hit, "Wonderful World." It really was an eclectic mix of music through the ages and enjoyable for that. At the end of the evening Max led us all in a rousing hymn written in 1907 "Will The Circle Be Broken?" This of course has been adapted and changed by singers ever since it was first published. Indeed in some versions it cannot now be regarded as a hymn, more as a country classic due to the version by the Carter family. There is a whole list of well known artists who have used the song it it's various forms. The chorus was even used by Carl Perkins in his recording of "Daddy Sang Bass" So it came to pass that a scratch band in a Coventry pub sang their version and they all enjoyed doing so.The Tump Folk Club takes it's name from the remains of a Motte & Bailey fort in the village of Brinklow. This is where it all started before moving further and further into Coventry. They meet every Thursday night at the Humber pub in Humber Road Coventry CV3 1BA Karen Orgill runs it and puts on concerts with named artists every couple of weeks when there is a modest door charge, otherwise a quid and you're in. Look out for the announcements on Facebook On April 6th it is Michele Holding and Bonz.