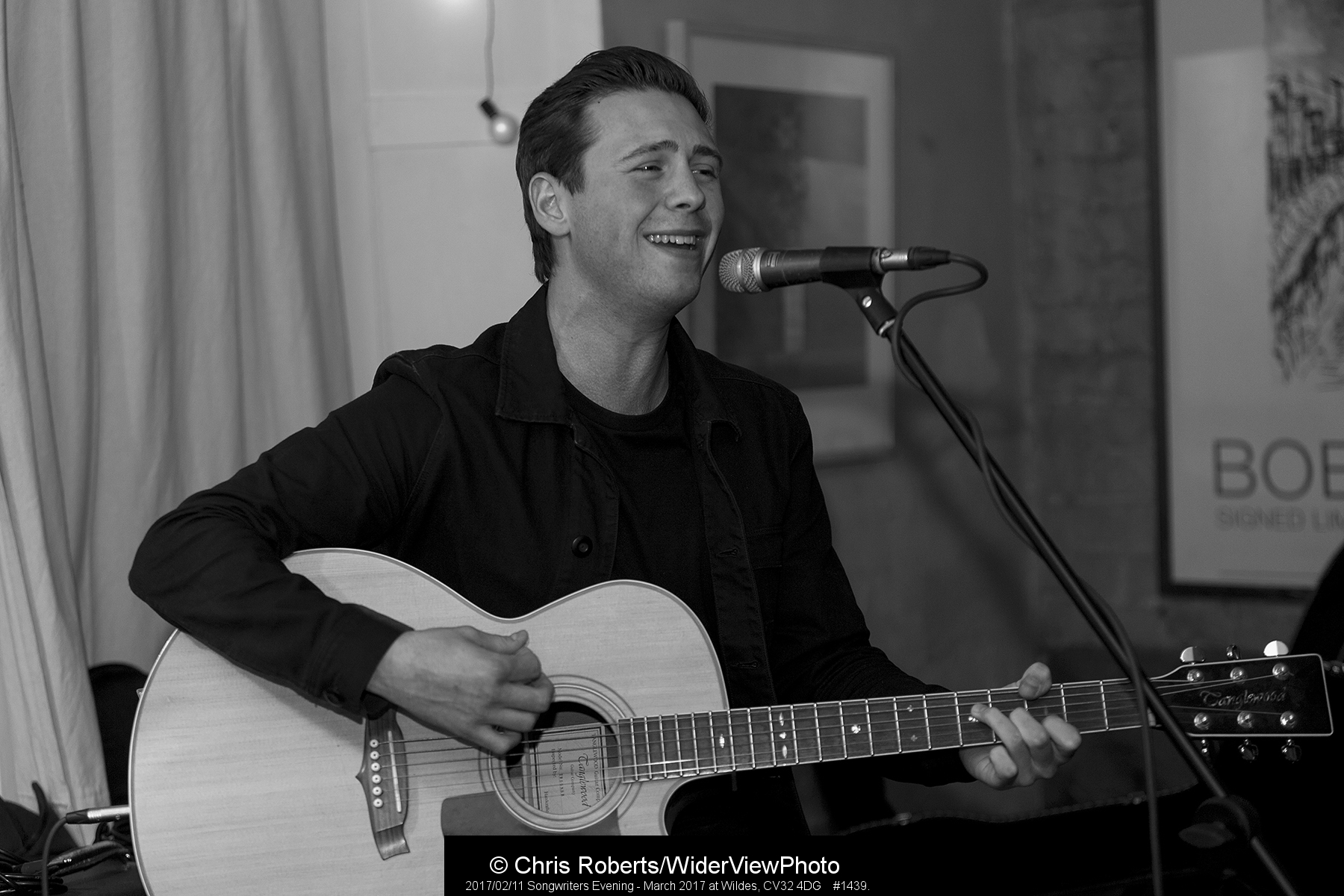 Another stellar line-up was pulled together, by local singer/vocal coach Shanade Morrow, at Wildes Wine Bar in Leamington Spa. This included the multi award winning Blues guitarist Laurence Jones performing some brand-new songs.These evenings are held every month and bring local musicians of all genres, but the key item being that they are performing songs they have written themselves. It gives an opening to both experienced and just starting musicians to try out their songs on an appreciative audience, with fine wine and food available.The evening kicked off with host Shanade with a couple of different style songs "Who is the Lion" and "Pictures". The second song was about dreaming what you want and visualising how you can get it. She accompanied herself on Electric guitar so she could test her new amp!Next up was Joe Dagger Merriman singing, with his acoustic guitar, some very new songs "Host", "Hard of Heart" and for the first time in front of an audience "Limerance".Then we had GabrielÄ— MantuškaitÄ— singing with her acoustic guitar some Jazz style songs including "Healing" and "Afraid". These all were sung with passion.Ready to try out some new style songs we had Laurence Jones with his acoustic guitar singing a solo set with his great bluesy voice but in a more modern "BritPop" style than the Blues he has done to date. The set of 5 songs were getting their first public airing, with only girlfriend Jana having heard before.They included "Don't you let me go", "Black and Grey" and finally "Must be Love" which was the story of how he met and fell in love with his girlfriend Jana.Next to step up to the mic was James Knight, from the group The Swaps, with his classic blues guitar rendering of "Villiers Street" and with some great slide guitar "Wake up this Morning".Then we had the first group on stage with a three piece band The JJs with their first song "Light Parasol" having a very new age/indie sound and then another song "Still Water" being more Reggae in style. All had great vocals from lead singer Jackie James.Back to a solo artist we had another singer with acoustic guitar Taylor-Louise Thomas with her very powerful soulful vocals. She kicked off with a new song "Race against the Tide" and sung a song she had written 13/14 years ago "Jealous Eyes". To finish she sang a slower emotional song "Always been Him".Then with a different style we had Rad Naria with his hip-hop style songs "Dusty" and "Toetapper", which he sang to the backing tracks that his brother-in-law had recorded with him in Amsterdam. The second song was about how music can bring everyone together and was accompanied by Rad's energetic dancing along with audience participation.Then the final music act on stage was the singing/guitar duo South Town with their blues style songs and vocals. The evening was finished off with some great comedy from comedian Horatio Gould.The next Songwriters performance evening, again hosted at Wildes Bar in Leamington by Shanade Morrow, will be on 4th April.

Another exciting line-up of songwriters had been again pulled together by host Shanade Morrow, for the monthly Songwriters night at Wildes Bar & ...
[9 images] END_OF_DOCUMENT_TOKEN_TO_BE_REPLACED