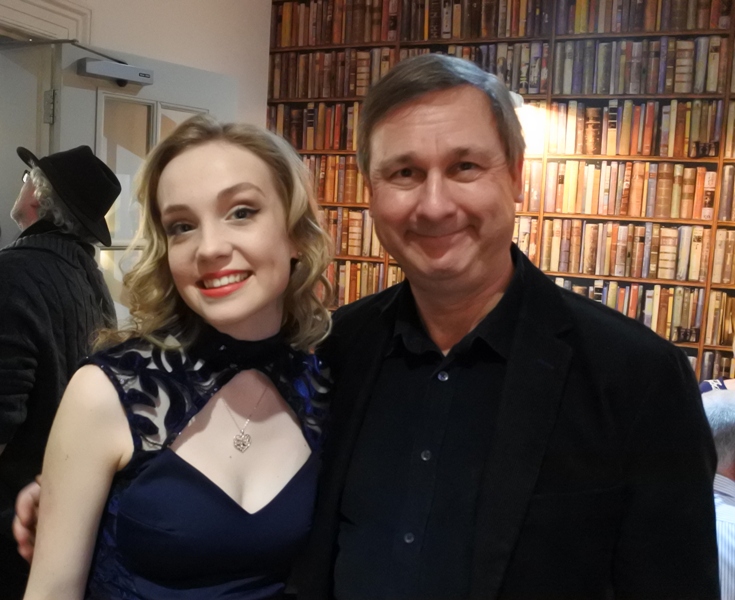 1 of 9
Ffion Rebecca EP launch 4th March 2017There can few more significant moments in a young singer's life than the launch of their first EP. For Ffion Rebecca, that moment came on Friday 4th March 2017. The EP which contained four tracks, three of which Ffion wrote herself was actually released a couple of week previously. Remarkably it held the No.2 spot between The Rolling Stones and the Rag 'n Bone Man in the I-tunes Blues best selling list for three whole days. For a new unknown artist this an unbelievable achievement. The Launch Party was almost too successful. The hotel in St Ives, Cambridgeshire was crammed as fans, family and friends spilled out of one room into another and even into the lobby. It was impossible to get a good sight of the acts taking part, but everyone could hear the superb music as it wafted through the hotel. If you got a seat, it was impossible to stand up. If you were standing then it became impossible to move. A good turn out then for this sunny vibrant sixteen year old who not too long ago entered a national singing competition and didn't get through. However there was something about her, an aura perhaps or a sound, something that even the man who spotted her Dutch Van Spall, didn't really know what is was. But he was sufficiently moved to approach her and invite her to join Big Help Academy. As those of you who have seen the profile of Big Help Music and their associate companies elsewhere in this magazine will know, they take raw unrefined talent and nurture it, giving the candidates, instruction (to almost insane levels) in all aspects of a career in the music industry. Such it was that Ffion Lawrence-Jones took the name Ffion Rebecca and raised her ambitious eyes to the skies. She sang beautifully, but didn't play any instrument well. So when she asked Dutch if she could become artists in residence during the annual Folk on the Water Festival, she was pushing her luck. This request was refused on the grounds that her instrumental skills were not sufficient She was told "Learn to play the guitar and we'll consider it." This incentive is all that Ffion needed. Not only did she obtain a guitar and learn to play, she hand decorated it herself. The result? She is Artist in residence Folk on the Water 2017. Ffion now uses the guitar to compose her many songs. Supporting Ffion at the launch party were her new band, who are so new, they do not yet have a name. These young men have smooth jazzy sound which suits her voice and music style admirably. Ffion has a deep interest in jazz as does her mother and perhaps that is the way her career will develop. It was a nice touch for Ffion to have Dutch Van Spall her manager, accompany her on guitar as he had done on many occasional in the last year. Also on the bill was a young man from Tamworth, who is also a product the BHA, Nath Brooks who has his own career in music. He and Ffion are great friends and I feel vindicated because almost nine months ago having heard them sing separately on several different occasions, I suggested to the Big Help Music management that they put them together for a duet. "Nah, not going to happen" was the response. Well ladies and gentlemen I am glad to say that on launch night, it DID happen, - twice. I was particularly with their rendition of Michael Jackson's "Billie Jean" which ended the show. Nath is collaborating with other singers too of which more in the future.What now for Ffion Rebecca? Since the performance of her EP in the charts, this girl is now in great demand and her diary is filling up with bookings. If you haven't got a copy of her EP you can download it from either I-tunes or Amazon just search "Ffion Rebecca" on either site. Physical copies are available..