The Handsome Family at The Assembly


The Handsome Family at The Assembly 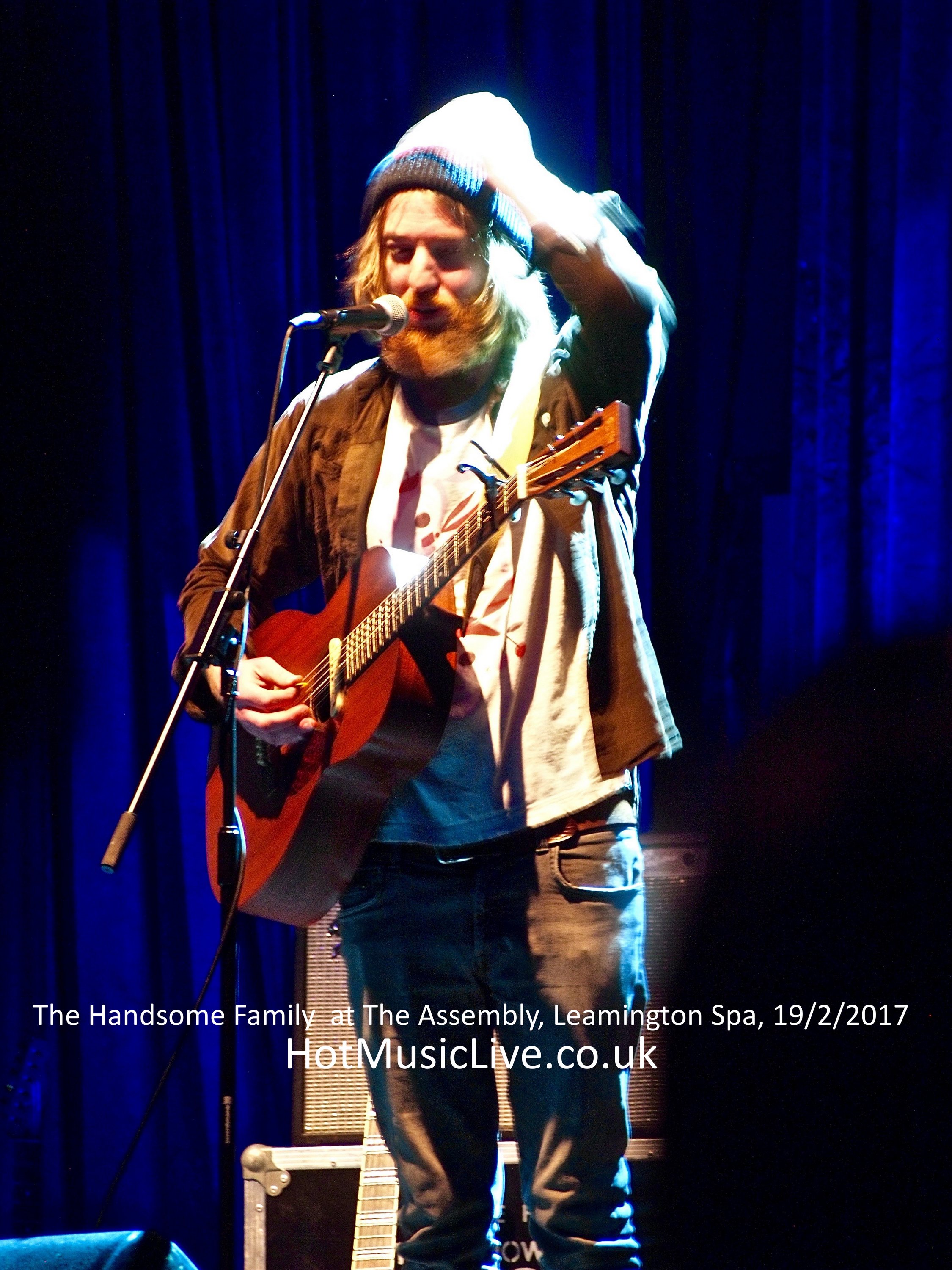 The Handsome Family
The Assembly (aka A great venue to worship Satan)
Sunday, 19 Feb 2017 at 7:30 PM
(support: William the Conqueror)

If Gomez had settled on one primary vocalist, cut some of the 90's indie distortion and went out as trio, I imagine they might have sounded a bit like tonight's support act, Newquay's William the Conqueror. Ruarri Joseph (Vocals, Guitars) proved himself a strong singer and more-than-able frontman. Their set was buoyed by the dead-on backing vocals and harmonies of Harry Harding (Drums) and Naomi Holmes (Bass). The young-uns got a good response from the seated Assembly crowd and were at their best with Joseph playing lead on his acoustic guitar (even joking that the goal was someday to be able to afford to hire a roadie to bring it to him "pre-tuned"). Stand-out track for this reviewer was "I Missed a Trick", but this was a solid, roots and rhythm (and, at times flirting with indie and anthemic) set, so keep an eye out for these guys on http://www.williamtheconqueror.net/

Now, everyone who made up the small but committed crowd at the Assembly knew why they were there ... and what they were waiting for ... and not just the Frogs and Moons! Personally, I have always aligned the Handsome Family (in my mind) as much with the likes of They Might be Giants and/or Mark Eitzel and The American Music Club as with any Americana or Alt-Country mavens. However, the four-piece band, fronted by Rennie Sparks (Bass Ukele, Harpsichord), led by Brett Sparks (Guitar, Lead Vocals) and featuring Jason Toth (drums, percussion and some keyboard parts) and the superb Alex McMahon (pedal steel, guitar, and keyboards) proved themselves one hell of a proper country band. Much has been said and written about their Gothic Americana style, indie cred and dark, quirky sensibility, but not nearly enough has been put to paper about their ability to truly kick some shit as a live proposition. Can I say that in a review? Well, I just did... Funny, at time fierce and fully loaded, The Handsome Family owned the room for word go.

Ostensibly sharing stage right with Bunny (her invisible friend) whilst battling a mid-Atlantic chest cough, Rennie's introductions and between-song commentary provided a wicked and witty counterpoint to the darkness of her lyrics. Dedicating the set to, among other-things, the memory of the great, late Robert Fisher (of Willard Grant Conspiracy) as well as there their adopted hometown of Albuquerque, New Mexico (home of Clamato and world leader in Drinking Game-related deaths), Mrs. Sparks set to on the bass ukulele with a sound and tone like the Lord himself drumming his fingers whilst also laying down shining backing vocals throughout. The erstwhile Mr. Sparks, handling the majority of lead vocals, brought forth a voice even deeper and even twangier (is that even a word?) than most thought possible, and that voice really soared at times, especially against the pedal steel on "Back in My Day" (my personal favourite). The weilder of said pedal steel, Alex McMahon, also showcased the kind of lead playing on "The Loneliness of Magnets" that would stack up against any slinger in the business.

Other set highlights included the Zevonesque "The Bottomless Hole" and, of course, "Far From Any Road". Hearing it live makes you realise why this tune has become The Handsome Family's calling card and ticket (and not simply the True Detective theme). The harmonies, the soloing, the elegant construction ... it was the moment we were all waiting for and, despite severe Trumpitis, that song, this band and the night delivered us our redemption. Capping the night with an encore of the obligatory "Frogs", the band left their purple stage and left us (all too soon) to return to the chill of mid-February, Middle English night.

Gig promotion: The Handsome Family at The Assembly, 19th Feb

The Handsome Family will be at The Assembly on Sunday, Feb 19th!Here's the official word from their promotion team at SonicPR.
[1 image] END_OF_DOCUMENT_TOKEN_TO_BE_REPLACED

AMBER RUN have announced an acoustic live show ‘AMBER RUN UNPLUGGED' at The Assembly, Leamington Spa on 10th May 2022 TICKETS ARE ON SALE NOW ...
[1 image] END_OF_DOCUMENT_TOKEN_TO_BE_REPLACED