Kate and the Mooncats at Churchover


Kate and the Mooncats at Churchover 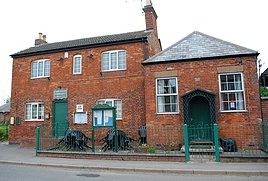 1 of 5
Kate & the Mooncats at Churchover. Saturday 4th February The Churchover Community Centre is in the heart of the village just off Junction 1 of the M6 and had completely passed me by as a music venue. I happened upon it because I wanted to see Kate and the Mooncats. Formed in 2014, this was the first time they had been in my neck of the woods since I became aware of them. This is strange because they are a Warwickshire band and all of them live within fifteen miles of Rugby. Kate Staunton on vocals fronts the band, this is a group that know each other well and operate like a well oiled machine. The front line is Kate, Bill Gibbon on sax and Paul Englefield on guitar, the back line being represented by Jon Furness on bass and Terry Reynolds on drums. Their first number, Van Morrison's "Moondance" started off in sultry fashion but soon developed into a rhythmic jazzy presentation and got us off to a good start. A journey back to WWII to find the plea "Don't sit under the apple tree" first featured by Glen Miller and the Andrews Sisters. Kate's version was lively and had the power to defy anyone there not to indulge in the tapping of feet. Back to 1971 to pick up Carole King's "Too late baby". The band complemented each other, Kate's smooth vocals supplemented by Paul's skilful guitar and Bill's sax providing the counterpoints with Terry's drums and Jon's bass driving it all along. Jon used to be a concert pianist, one would have thought that in deciding to change instruments, he might have chosen to play something easier to carry around but I'm glad he didn't. Next we had T-Bone Walker's "Stormy Monday". It is a slow twelve-bar blues performed in the West Coast blues-style that features a smooth, plaintive vocal and distinctive guitar work.It is not practical to mention every song the band played, but a version of "Fever" has to be called out as it included exciting drums from Terry and proved that Drum 'n Bass existed way before the term was heard around the teenagers who think they invented it. The concert included more contemporary material from the likes of Amy Winehouse, but the stand out performance of the first half for me was Bob Dylan's "Don't think twice it's alright." Like many covers of Dylan songs it was immeasurably better than the original. I am indeed indebted to Bill Gibbon for pointing me in the direction of the same song by Hailey Tuck, it is very different and enjoyable. "Nobody's fault but mine" a traditional blues song included a cameo appearance of "House of the rising sun." "Feeling Good" by Anthony Newley and a partner, but made famous by Nina Simone followed. It was a delight. The Mooncats gave this a good bluesy treatment and included a conversation between sax and guitar each taking four bars each combining with Kate's soaring vocals. They tricked the audience with a false ending which caused them to begin applauding in mid song - the buggers!"The Devil ain't lazy" is a Fred Rose fine country swing number from 1947 which saw Kate sing and dancing simultaneously. Kate has been exposed to show business all her life, being the daughter of comedy impressionist, Paul Melba. So performing has been with her a long time, her partner is more into folk music (Sounds like a fine fella), and she tried working with him, but as Kate is more into jazz, the voice matches weren't great, she is keen however to point out that she has only ever been in one band, - Kate and the Mooncats. Long may she be so.Kate went on to produce a strong vocal performance in "Everybody loves my baby" from 1924 and then displayed her scat singing style in "That man" from the pen of Caro Emerald the Dutch pop-come-swing singer. Before that we had "Johnny gotta boom boom" which indeed did have big vibrations going down. A second Led Zeppelin number, "Rock n' Roll" came along which I managed to capture on video although the sound quality is nowhere near as good as that produced in the hall. Terry illustrated his experience on drums by his inventions during "It ain't what you do it's the way that you do it." before they went into their signature numbers "Ain't nobody here but us chickens" The list of people who have performed this song includes the like of Louis Jordan, BB King, Lisa Stansfield et al I wonder anyone ever stood up in front of them and did the Chicken Dance? Well no probably not, and it didn't happen this night either. This was supposed to be the last number in the show, but it turned out to be the penultimate song as a encore was demanded by the packed house and they were rewarded with "Night and Day".I am at a loss to say how thoroughly I enjoyed this concert and I wasn't alone, comments from some of the regulars were recorded as "One of the best bands that have ever played here, - really enjoyed the music choices" and "Kate's voice was amazing!" along with "They were terrific!" So I think it fair say that that as an entertaining event it was an outstanding success. The Churchover Community Centre hold concerts every couple of months or so, keep an eye on their Facebook page.