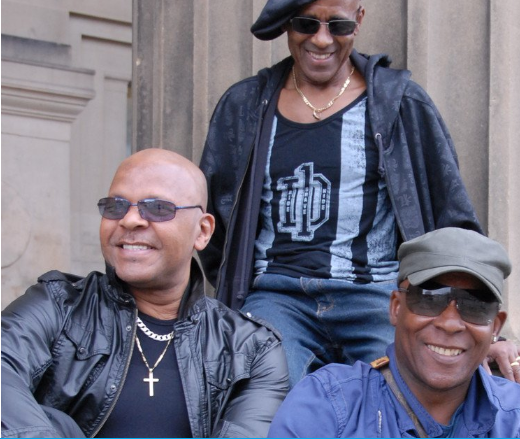 The Real Thing at The Rialto Reborn on Friday, March 31st.
ImpressivePR sent us their official press release ...

Multi-million selling soul band The Real Thing are back on the road in 2017 - the tour, starting on 10th March at Inverness's Ironworks takes in most of the year! Featuring the group's three original vocalists Eddie Amoo, Chris Amoo and Dave Smith along with their 5-piece band, the trio are set to deliver a funky retro show performing all of the band's classic songs mixed with contemporary grooves.

Celebrating the 40th anniversary of their debut hit single 'You to Me Are Everything', the Liverpool based trio boast three million selling hit singles including, 'Can't Get by Without You' (the latter two tracks being in the BBC millennium Top 100), 'Whenever You Want My Love' and 'Can You Feel the Force', making them the UK's best-selling black group of the late 70s. They were also one of the top ten best selling bands of 1986.

Formed by lead singer Chris Amoo and David Smith in 1972, they added Ray Lake (who has since sadly passed away), Kenny Davis and Eddie Ankrah with Kenny and Eddie leaving two years later. Continuing as a trio, in 1975 they added Eddy Amoo, brother of Chris, who had been helping in the band's development. A singer-songwriter with The Chants, this band had origins in the Mersey Beat boom of the 1960s and were discovered and launched by The Beatles.

Spotted by ex-Radio Luxembourg DJ Tony Hall, The Real Thing were snapped up by Pye Records and the 1976 release 'You to Me Are Everything' sailed to the top of the UK singles chart. The band went on to have a further nine hits over a three-year period including 'Can't Get by Without You', and 'Can You Feel the Force', both of which were top five success stories.

The band's iconic album '4 from 8' was released in 1977 and contained the 'L8 medley' which included the classic track 'Children of the Ghetto'. The song has since been covered by artists including Mary J Blige, Courtney Pine and Philip Bailey (Earth, Wind & Fire) and has been sampled by numerous hip hop artists as well as being featured in the Spike Lee movie, 'Clockers'.

In 1986 'You to Me Are Everything', 'Can't Get by Without You' and 'Can You Feel the Force' were all remixed and became huge hits once again, thanks to their huge club following.

The Real Thing recently released 'The Real Thing Live' DVD and CD recorded at the Philharmonic Hall, Liverpool and celebrates over 40 years on the road and includes the concert in full, new material and a cover of The Beatles song 'Eleanor Rigby'.

Commenting on The Real Thing's success, singer Chris Amoo said, 'There's always going to be a sense of nostalgia about our music. It's the sound track to so many people's lives and that will never die.'