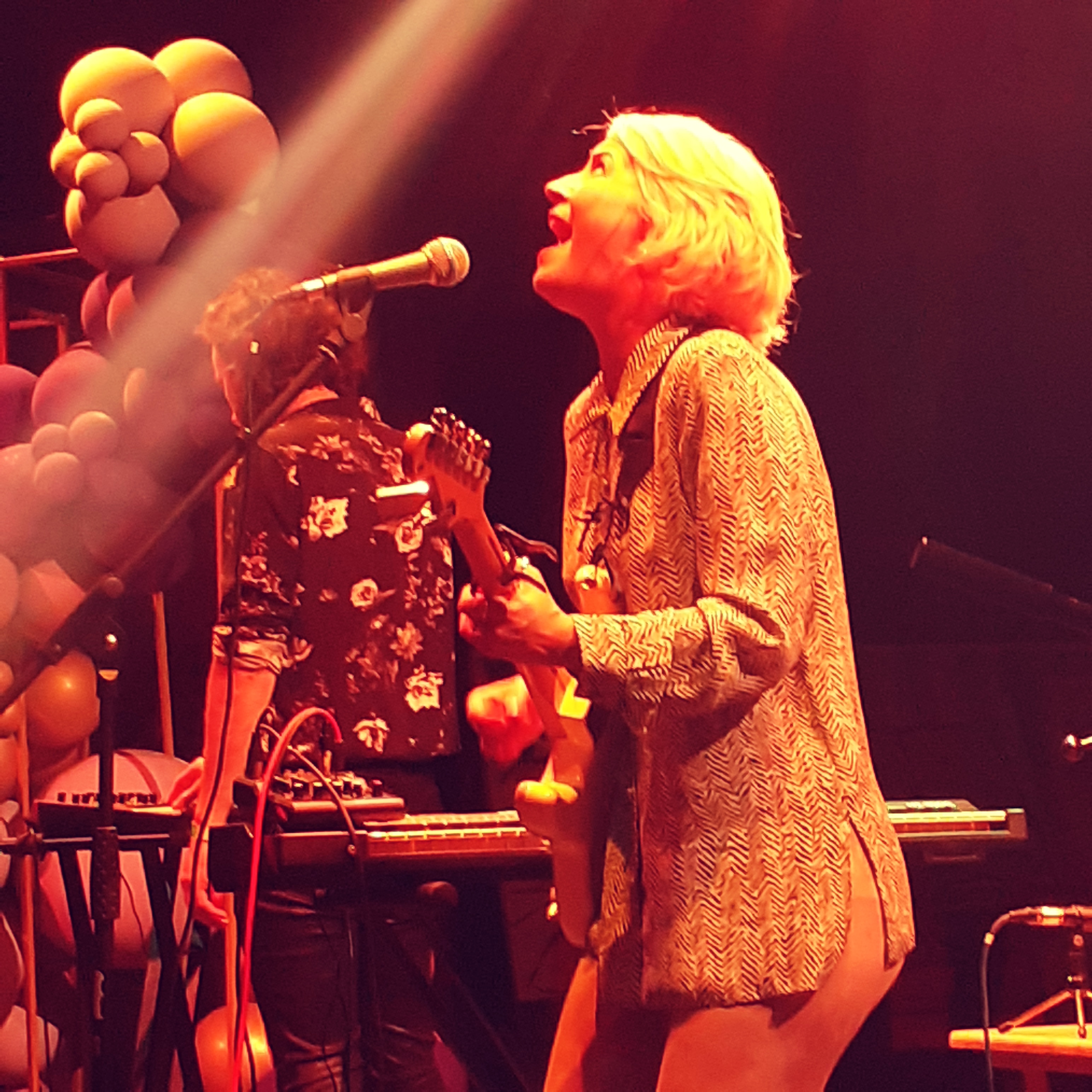 I am sure I'd have supported the Elevate Festival last evening regardless of the stellar lineup, as it was both celebrating fifty years of Coventry Haven Women's Aid & raising awareness and funds for it.

Superbly conceived & executed at the Criterion Theatre in Earlsdon by Sophie Hadlum (no stranger to these pages of course), Jennie Devine and their team, the event offered two stages of live music (one inside & a lighter "jamming" stage out in the sun) and a range of stalls. The music alone must have taken a lot of work: stellar it might have been, but following the development, you could see how COVID19 etc worked its turmoil on the intended participants, necessitating late changes, so my respect to those who pulled it all together & performed, in some cases at quite late notice. Credit too to Ian Todd for the outdoor sound & David Cornish & the Criterion team for that inside.

Inevitably given the two stages coinciding, I had to favour one over the other & the Main Stage was so stunningly compelling that I'm afraid I only caught tiny glimpses of Coventry Comhaltas with traditional Irish folk music & the delightful Posh n Becks.

I also hold my hands up to not being able to get there for more than the end of the set from World Song inside, but after that, I was glued to the following four acts: all of whom are familiar to this magazine and/or "Hot Music Live Presents". None actually requires any sort of introduction to anyone likely to be reading this I imagine.

Chessi O'Dowd played a set from her debut album ‘Wine Glass Filter' which I reviewed back in May: if you didn't get convinced to listen to this excellent record by my words then, I hope I can persuade you now. Devoid of the extra instrumentation added in the studio by the likes of Jack Blackman & Dan Sealey, the songs lose none of their power nor advocacy: Chessi is an intense performer who needs nothing but her superb voice and her guitar or ukulele. I witnessed her afterwards being repeatedly complimented by various members of the audience: many of whom I gathered had been introduced to her beautiful music for the first time.

Paradise of the Titans whose ‘Mermaid'  EP and live performance at The Tin  I reviewed towards the end of last year , is the project of Alice Weston who was last night accompanied by Matt Rheeston on generally percussive instruments (he popped up later again with Bar Pandora, though without the blue wig he deployed this time). This is a most dramatic artist: in every sense. What you see is as important as what you hear. I was watching the audience and with one single exception (shame on him), every face was intent on what was going on on stage for the entire set: which is so unusual. In fact it was a very unified set given that they played all their long & hypnotic songs straight through without breaks, let alone chatting with the audience: how each flowed into the next was most impressive.

Great as the EP is, you derive yet more from Paradise of the Titans by immersing yourself in their live performances & I recommend that to you: find yourself swimming with mermaids one moment & then transported to outer space to commune with aliens.

What can one say about how Ace Ambrose has been developing her artistry?  What we actually were treated to last night was her full (and frankly full-on) band Ace & The Oddity which included Callum McKissock on drums. If you enjoyed songs such as "Jukebox Time Machine" from her earlier & solo records (and "Hot Music Live Presents") or found her a charismatic onstage figure by herself with just a guitar, you should see & hear her with the band. Songs like that one now roar with extra passion & fury and the energy of the band is infectious. Freed of playing guitar (which in some ways is a shame as she is so good), Ace celebrates her liberation with total relish & has become almost a different performer. I have to think back to Ari Up of The Slits to find any parallels. Mind you her band are well chosen as they (especially the bass player) are pretty energetic themselves & add to overall sense of frenetic enjoyment. And the songs, many of which I've reviewed in the magazine, give them a great deal to play with.

It is instructive I think that despite the quality of the lineup, it was Bar Pandora who were headliners: based as much, if not more on the esteem in which they are already held and the buzz around their music online & on air than on band longevity: band leader Charlie Tophill confirmed to me afterwards that they have still only ever played four gigs. Not that you could tell by the confidence & panache on display. Augmented to a trio from the last time I saw them, Tom Something (a stage name I'm guessing) joined Charlie & Matt on bass & other instruments which added to the songs and brought them that much closer to the acclaimed recorded versions. While not quite as theatrical as Alice on stage, Charlie is still one who understands the power of gesture & movement to underscore what she is singing about. Her performing demeanour lies somewhere between the cool projections of Chessi or Alice and the wildness of Ace and between the four of them, they brought an interesting range of dynamics to the bill.

The Bar Pandora setlist would be familiar to those following her career, consisting in the main of her debut single & the recently issued & eponymous debut EP and so the audience were au fait with the songs already. What however also seemed to particularly delight them was the abrupt way in which Charlie ended two songs with the click of a switch on her looper: not sure I've ever heard such conclusions, but as I say, it went down well.

It was interesting who was there: many people were clearly supporters of the Haven but the musicians of Coventry & Warwickshire were out in force to support not only the cause but the musicians & that alone might tell you something of the regard in which they are held: I saw members of Shanghai Hostage, The Upsiders, Nizlopi, the Silver Wye, Gods Toys, King of the Alps, the Duck Thieves, Brass Hip Flask to name but a few.

Kudos too to those supporting the evening who could not make it but demonstrated their intentions in other ways, including Pauline Black, The HMV Empire, Landmark Trust, Curves, Silvena Toncheva, Turtle Bay, Warwick Castle, Hollie McNish, Swan Furnishings, Helena James Fitness, Go Ape, the Slug & Lettuce & Metropolis Bar.

I think that the last few years taught us about the relativity of our perceptions of time if we had not considered them before.
[1 image] END_OF_DOCUMENT_TOKEN_TO_BE_REPLACED

In the relatively short period of time (about five weeks) since I reviewed the most recent single release "Look At Me" from Bar Pandora, things have ...
[1 image] END_OF_DOCUMENT_TOKEN_TO_BE_REPLACED

Fresh out today from Bar Pandora is her single "Look At Me".
[1 image] END_OF_DOCUMENT_TOKEN_TO_BE_REPLACED

It's great to review Bar Pandora for the first time in the magazine & I'm sure that it will not be the last time.
[1 image] END_OF_DOCUMENT_TOKEN_TO_BE_REPLACED