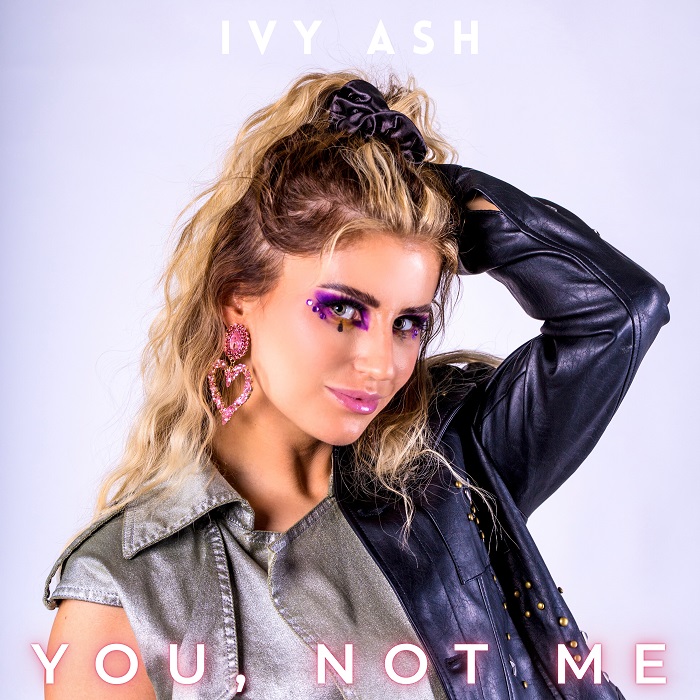 With her latest single "You, Not Me" (which doesn't actually come out until August 5th but please be ready for it because it's so good), Ivy Ash has taken another considerable leap forwards in her art.

The second track (after "Third Degree" which we reviewed last November) to come out of her ‘Developing Your Creative Practice' project with Arts Council England, the song by itself justifies the title & presumed aim of the funding: Ivy is not using the money just to record her songs, she is very deliberately using the structure & philosophy of the funding to consciously move her writing into new areas which might, without this support, have been a much slower process.

Key to this seems to be the notion of ringfencing time for exploring original ideas and approaches  (which given how much she has had to balance studying, working & travelling on top of her creativity, that must have been vital) and as she puts it herself, the freedom from pressure & sense of space to create within seem to have resulted in a very relaxed & organic writing environment: "I wrote this song during my development and creation time within the third quarter of 2021, it was one of those songs that happened so naturally, the lyrics poured out and it was a process that I couldn't stop if I tried"

That sense of material pouring out of her is pretty consistent with the overall feel of her Ivy Ash work to date: that natural effervescent charm which bubbles out of your speakers. Nevertheless, if you've been following her career, you'll remember that a couple of her upbeat tracks have subsequently appeared in acoustic form later too. In neither case was I expecting the stripped back twin (and an artist who can surprise is onto a good thing) and once again, I'm wondering whether she'll be pulling off the trick again: it just seems too "right" in its current form.

This ability to create original material which from the start is capable of being plausibly presented in differing forms is an interesting & unusual one and one which will get her noticed: quite a few other people (e.g. Joe Dolman) do this regularly, but Ivy seems to include it as part of her artistic identity: perhaps linking her current pop persona with her more laid back earlier work.

But to return to "You, Not Me"… Ivy describes it as "electro pop" which I don't intend to dispute as such, it's just that to me it's got the funk: a throbbing bassline in particular which goes above & beyond what we've heard from her before. This is a real deal & that's why I think the track will exceed streaming & other success indicators of her earlier work.

Sassy to a high degree (thank you Ivy) it seized me by the scruff of the neck on a dull afternoon & invigorated me. It should do much the same to you if you give it the chance. The word "pulsating" has already been used of it, which robs me of the chance to use if fresh, but as it fits, I'm happy to pass it on.

Ivy describes it as "… fearless, confident, and no-nonsense. I believe that everyone should be free to be themselves, and I want to hammer that message home." Which she does through enthusiasm & panache rather than crude brute force.  This is someone confident in her own skin & alert to the wiles of the world enough to be aware of gaslighting & able to swerve it.

Let's face it, "You Not Me" has a very important message, a statement of intent, but the first impression it's likely to have on anyone is that as a song it's as infectious as any of the viral atrocities still in turgid circulation, but thankfully in a beneficial way.

The canon of Ivy Ash to date can be seen as a ladder: each rung higher & by now we're a long way off the ground. Ivy sounds like she has a head for the heights.

And so here we are at the third single from the irrepressible Ivy Ash, namely "Rain Again" (which is released on 2nd July) though really it's ...
[1 image] END_OF_DOCUMENT_TOKEN_TO_BE_REPLACED

I was delighted last month to describe to the debut single by Ivy Ash (the new sparkling pop persona of Bethany Dyson) called "Oops".
[1 image] END_OF_DOCUMENT_TOKEN_TO_BE_REPLACED

Back in November, I introduced you to Ivy Ash, the sensational new pop persona of Bethany Dyson.
[1 image] END_OF_DOCUMENT_TOKEN_TO_BE_REPLACED

It's been a few months since I reviewed "Open Your Eyes" by Bethany Dyson in the magazine  the follow-up to "Just You & Me" which also features ...
[3 images] END_OF_DOCUMENT_TOKEN_TO_BE_REPLACED